You are in : All News > Barry Callebaut rides Ruby chocolate momentum amid sales rise

22 Jan 2020 --- Barry Callebaut Group has reported a significant rise in chocolate sales above the global market average, outlined in its first quarter key sales figures for fiscal 2019/20 (ended on November 30, 2019). The cocoa giant hit several innovative milestones last year, during which Wholefruit chocolate deuted and Ruby chocolate continued to gain momentum following its 2017 launch. Following the breakthrough introduction of Ruby chocolate in the US market, and subsequent unveiling of Ruby-inspired NPD, the company anticipates sustained momentum for the world’s “fourth chocolate.”

“The strong start to the year, together with a healthy portfolio and the diligent execution of our ‘smart growth’ strategy, give us confidence that we are on track to deliver on our mid-term guidance for the period ending with fiscal year 2021/22,” says Antoine de Saint-Affrique, CEO of Barry Callebaut.

The cocoa company increased its sales volume by 8.2 percent to 585,620 metric tons during the first quarter of fiscal 2019/20. Sales volume in the chocolate business grew by 7.7 percent, noted as well above the global chocolate confectionery market which was flat. Growth was supported by all regions and key growth drivers: outsourcing (2.7 percent), emerging markets (16.7 percent) and the company’s Gourmet & Specialties segment (excluding Beverage, 4.4 percent).

Excluding the first-time contribution from the acquisition of Inforum – a Russian supplier of chocolate, compound coatings and fillings – last February, organic volume growth was recorded at 6.2 percent. Sales revenue amounted to CHF 2 billion (US$2 billion). 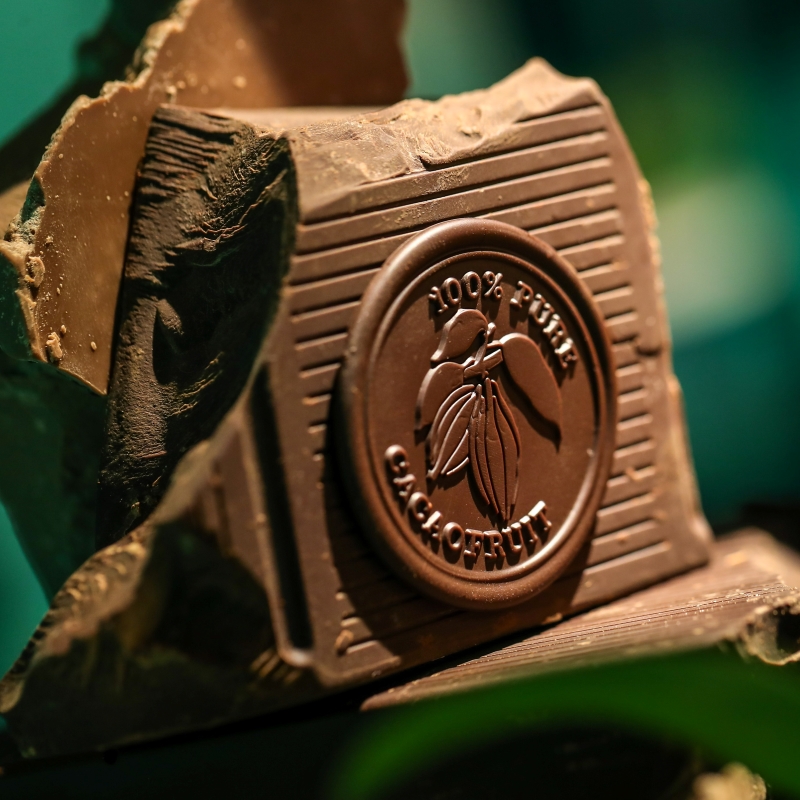 Click to EnlargeWholefruit chocolate by Barry Callebaut.Strategic milestones in the first quarter of fiscal 2019/20
In September 2019, Barry Callebaut introduced “Cacaofruit Experience,” a new Food & Drink category including Wholefruit chocolate. Whereas normally 70 percent of the cacaofruit is discarded as waste, Cacaofruit Experience makes use of the entire fruit. This results in a low-sugar, high-fiber and high-protein chocolate ingredient for applications such as juices, smoothies, frozen desserts, bakery products and confectionery offerings. The company’s first Cacaofruit Experience products for consumers are now being piloted in California, US.

Last November, Barry Callebaut was granted a Temporary Marketing Permit (TMP) by the US Food and Drug Administration (FDA), clearing the way to market Ruby as chocolate in the US. This was marked as an important regulatory milestone towards establishing Ruby chocolate as the fourth type of chocolate. Only two years ago, the first consumer brand launched Ruby chocolate and more than 70 brands in more than 50 countries have followed worldwide since.

Under its gourmet brand Mona Lisa, Barry Callebaut launched Ruby chocolate decorations, marketed as a convenient way for chefs to add a spark to any creation with theRuby berry-like flavor and pink color. Furthermore, in January 2020 Costa Coffee launched Ruby hot chocolate. Also in January 2020, Unilever launched Magnum Ruby ice cream bars in the US, Germany and the UK.

Sustainability milestones
Barry Callebaut published its third Forever Chocolate progress report last December highlighting the progress of the Group towards making sustainable chocolate the norm by 2025. The achievements include that the Group sustainably sourced 47 percent of its cocoa and 54 percent of its other ingredients in fiscal year 2018/19.

21 May 2020 --- Sprüngli has launched the Grand Cru Absolu, the world’s first chocolate with only two ingredients. The Switzerland-based producer of grand cru chocolate... Read More

14 May 2020 --- Emotions play a significant role in food and are simultaneously linked to initial food preferences. That is according to Renata Januszewska, Global R&D Sensory... Read More

06 May 2020 --- Perceptions of food sustainability in Japan – especially within the chocolate market – are rapidly changing according to chocolate giant Barry... Read More