You are in : All News > Pretty in pink: Magnum launches Ruby chocolate-covered ice cream in US

07 Jan 2020 --- Ice cream mega-brand Magnum has launched a new line of Ruby chocolate-covered mini ice creams in the US. The Magnum Ruby Minis release makes Magnum the first brand in the US to launch an ice cream featuring the fourth type of chocolate. The ice creams are available in packs of six bars at select retailers now and will be rolled out to grocery stores nationwide by February. The launch comes after the US Food and Drug Administration granted a Temporary Marketing Permit to Barry Callebaut – Ruby’s supplier – in November 2019, allowing the marketing of Ruby as the fourth type of chocolate, after dark, milk and white, in the US. 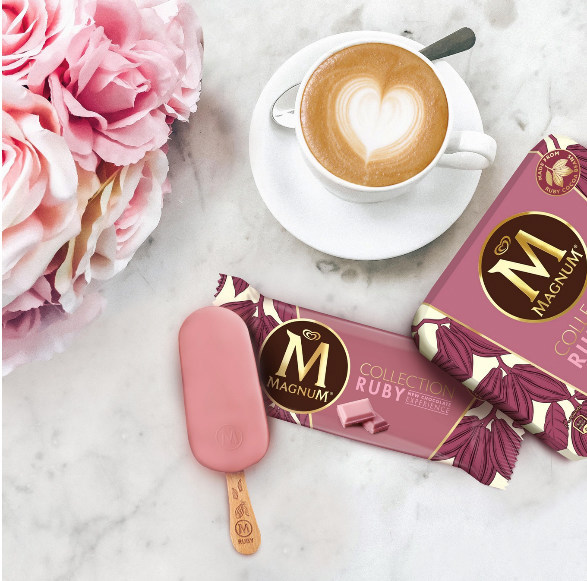 Ruby chocolate takes over
Ruby chocolate, officially launched by Barry Callebaut in September 2017 in Shanghai, China, after more than ten years of development. The company first introduced Ruby in the US in May 2019, following successful roll-outs in Asia, Europe and Australia/New Zealand.

The Ruby cacao bean is unique due to the fresh berry fruitiness and color precursors naturally present in it. The cacao beans are sourced from different regions of the world and have a specific set of attributes unique to the fourth type of chocolate. Ruby cacao beans grow in countries known for cacao: Ecuador, Brazil and the Ivory Coast.

Since its launch, Ruby chocolate has been introduced in Asia Pacific, Europe, the Middle East and South Africa by both consumer and artisanal brands, such as Prestat, Baci Perugina, KitKat, Leonidas and Fazer. Ruby chocolate also made waves during ISM 2019 in Cologne, Germany, as the “fourth type of chocolate” was given its first moment in the major trade show. Just over one year after Nestlé debuted its KitKat Ruby in Japan and South Korea, at least eleven chocolate manufacturers presented new ruby chocolate products, from hollows to pralines, at the event.

In the US, Ruby has already been successfully introduced in recent months featured as Ruby cacao bars, Ruby truffles and more. Looking ahead, Barry Callebaut has noted that the Ruby portfolio will be extended to include decorations, ice cream coatings and more.

Consumers today demand more taste from their food, and in the ice cream category, there is a growing trend for new and exciting flavors, both sweet and savory varieties.... Read More

Cargill is investing US$45 million to add soluble fibers to its European portfolio of starches, sweeteners and texturizers as demand for reduced-sugar products grows.... Read More