You are in : All News > Animal-free dairy chains: Those Vegan Cowboys develop plant-based casein by precision fermentation

08 Apr 2021 --- By copying the most important protein component of milk, casein, any kind of cheese can be recreated to be plant-based in the future. That is according to Those Vegan Cowboys, a Belgium-based company founded by the former owners of The Vegetarian Butcher.

While demand for vegan cheese alternatives is rising, the start-up is tapping into microbial fermentation methods for producing caseins in cost-competitive plant-based dairy production.

Will van den Tweel, project director at Those Vegan Cowboys, speaks to FoodIngredientsFirst about the company’s latest developments.

“The dairy sector is not a very sustainable industry,” he says. “In the Netherlands and other European regions, there are major environmental issues relating to dairy and meat production.” 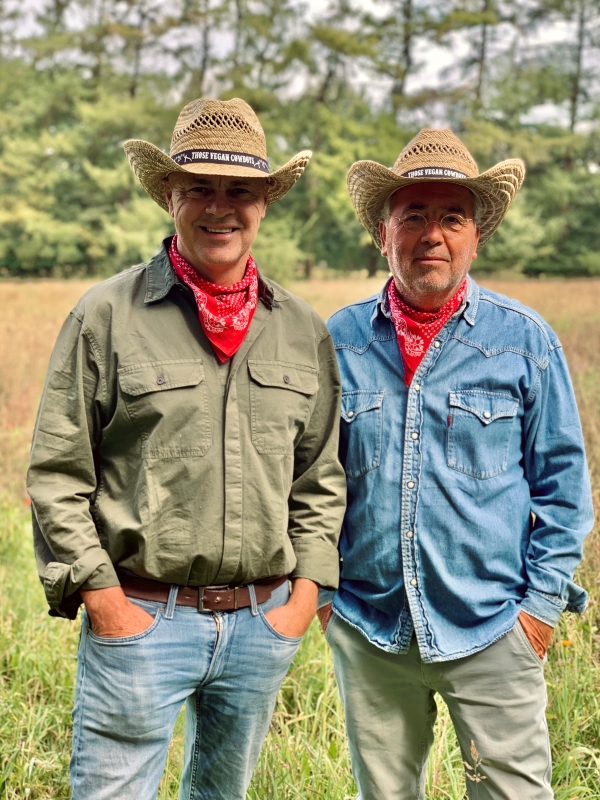 Jaap Korteweg and Niko Koffeman founded Those Vegan Cowboys in early 2020.“You also need an enormous amount of land and lots of water for the production of any dairy. And so, alternatives are needed.”

“Initially, they explored the type of proteins that are present in milk and whether you could get them out of plants,” he details.

Caseins are, however, special proteins that plants do not produce. If you look at cheese and what makes cheese, cheese, is that it contains casein proteins. In milk, caseins are about 80 percent of the protein present.”

“Microbial production via precision fermentation has become a very powerful technology. The genetic information for the relevant protein is incorporated in a microorganism, and by growing this microorganism under specific conditions, the protein of interest is produced in large quantities. This way, for example, most of the currently used chymosin, also called rennin, the cheese clotting enzyme, is produced already this way.”

”This can be a very efficient way for producing the milk proteins itself, whereby the environmental impact is reduced about five-fold,” he affirms. “Developing and scaling such technology, however, will take time. To create the effect, it will also need to be cost-competitive with the current traditional way of production.

“Not only this, but you then have to gain regulatory approval, which in Europe can take around two years. In the US, it’s possible to gain approval in just 12 months.”

Parallel to developing the production technology for the caseins, Those Vegan Cowboys are also studying the application of these caseins for making good-tasting vegan cheese alternatives.

“It’s not an easy project,” van den Tweel maintains, “It’s quite a challenge.” 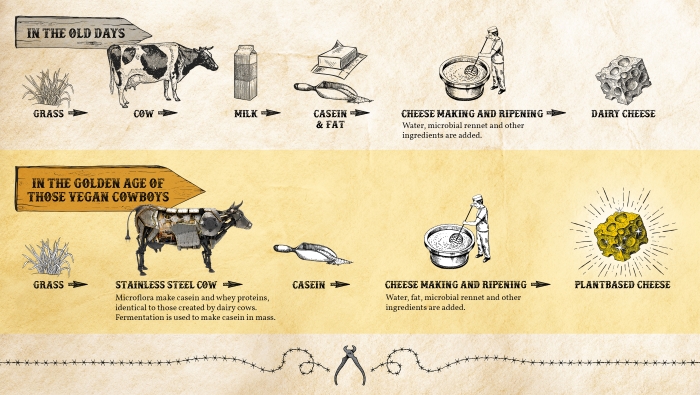 Those Vegan Cowboys say that going cattle-free is the most promising and futureproof option for truly sustainable cheese.

“But more sustainable alternatives are needed. Jaap and Niko are very committed and want to also invest in that to make it happen to contribute to that and make a step in the right direction for an animal-free dairy supply chain,” he notes.

“There might be some differences in the glycosylation and/or the phosphorylation of the proteins. However, the functional properties will also be very similar to the proteins sourced from cow milk.”

Using its fermentation method, Those Vegan Cowboys are producing caseins from carbohydrates. However, the inputs for their production could vary broadly.

“Ultimately, we target to use agricultural co-products and/or grass, and similarly convert that, to make it completely plant-based and animal-free,” he explains.

The road to animal-free
Those Vegan Cowboys’ mission is to make the dairy chain animal-free. Commenting on how realistic he thinks that is, van den Tweel says, “change won’t happen overnight.”

New plant-based products by Westland Kaas and Those Vegan Cowboys are coming soon. “Nowadays, several companies are using different fermentation methods to recreate cells and ingredients in the meat and dairy space, so things are “moving in the right direction.”

“Consumers realize that industry can do more, and they are willing to change and look for more sustainable products,” he adds. However, there are some challenges ahead, such as cost and technology.

“We will see some big changes in the years to come. How big exactly that will be is difficult to say, but we are getting there,” van den Tweel underscores.

Partnership with Westland Kaas
Those Vegan Cowboys and Dutch cheesemaker Westland Cheese recently joined forces to produce a new plant-based cheese line. Like all players in this space, the partnership is focused on flavor accuracy.

The line of Westland Cheese and Those Vegan Cowboys will be launched under a new joint brand name and will eventually consist of various products.

“We together with our partners are very committed to contributing to a more sustainable dairy industry,” concludes van den Tweel.