China battles with outbreak, US strengthens safeguards and pork prices pushed up 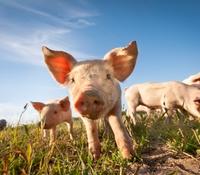 05 Apr 2019 --- As China battles to get to grips with the fast-spreading outbreak of African swine fever (ASF), which has been wiping out herds of pigs all over Asia, concerns are being raised over food security. It is feared that the outbreak will drive up pork prices as the impact starts being felt in international markets.

China’s ASF outbreak goes back to August 2018 when the first case was found in Liaoning Province, in northeast China, when 47 pigs died. Since then, over 113 cases have been reported in most hog production areas. However, recently, the number of cases has been decreasing each month. There have only been two cases in March 2019, compared to 21 cases in December 2018 and 25 cases in November 2018. The virus causes hemorrhagic fever with high mortality rates in pigs and there is no vaccine.

From May 1, Chinese pork processors will have to test for the presence of the virus following a mandate from China’s Ministry of Agriculture (MoA) which insists the country is capable of controlling ASF. However, the losses spreading through China’s pork industry are beginning to move global pork prices and the US is putting safeguards in place as fears escalate over possible contamination risks.

The ASF-prevention measures introduced by the US Department of Agriculture (USDA) include ramped up coordination with customs and border patrols at key US airports and seaports and strengthening inspections.

The measures to prevent the spread of ASF to the US are particularly poignant to the US pork industry because of the ongoing trade dispute with China, which has been causing problems for many months now.

China upped the severity of its sanctions against the US as the trade war between the world's two largest economies escalated last April. China also produced a long list of food products that are subject to tariffs, including frozen pork.

“US pork producers are already facing headwinds in the form of trade disputes with key export markets; an outbreak of ASF would be devastating,” says the US National Pork Producers Council (NPPC) President, Jim Heimerl.

“With no available vaccine, prevention is our only defense. We thank the USDA’s Animal and Plant Health Inspection Service (APHIS) for strengthening safeguards to protect our animals and the rural economy,” he notes.

The ASF-prevention measures also include:

- Increased producer awareness, including the importance of self-evaluations of on-farm biosecurity procedures;

- Research on accurate and reliable testing procedures to screen for the virus in grains, feeds and additives, and swine oral fluid samples;

- Collaboration with officials in Canada and Mexico on a North American-coordinated approach to ASF defense, response and trade maintenance;

- Coordination with the US pork industry leadership to assure unified efforts to combat ASF.

However, China’s MoA claims that ASF – an animal disease affecting only pigs and with no human health or food safety risks – is tentatively under control. But the impact of ASF on the country’s hog industry is expected to last for a long time as the government continues to work to support hog production and increase pork supplies.

Pork prices have reportedly been edging up since February as trading companies realized that hog supply is, in fact, decreasing.

“At present, ASF is the most threatening animal disease to the hog industry. Therefore, the disease will definitely affect the production and market prices of hogs and cause production losses,” says Dr. Monique Eloit, Director General of the World Organization for Animal Health (OIE).

“Given that China has taken effective measures, I believe the disease will not pose a huge influence on China’s hog market if the disease has been continuously controlled in an effective way,” explains Dr. Eloit.

“Since 2018, the ASF epidemic situation has been relatively severe. The epidemic is still spreading in many regions. At present, ASF has been spreading to China, Mongolia and other countries. Therefore, the current global epidemic situation we need to face will be more complicated than ever before,” she adds.

Dr. Eloit further notes that since China is the largest producer of live hogs as well as the largest consumer of pork in the world, the epidemic affects not only the live hog industry but also the international trade.

“I highly recognize the prevention and control measures taken by China and I am very confident that China can do a better job of controlling the epidemic,” she notes. “The most difficult issue on global ASF prevention and control is that an effective vaccine is not yet developed. As a result, we must implement strict biosecurity measures in order to prevent cases caused by illegal smuggling and goods carried by tourists. ASF is not only a problem for hog raisers, but also for everyone, including tourists and visitors,” Dr. Eliot adds.

The FAO Meat Price Index averaged 162.5 points in March, up marginally (0.6 points or 0.4 percent) from its revised value for February, continuing a trend of modest price volatility observed for several months. In March, price quotations for pig, bovine and poultry meats received some support from a surge in import demand, especially from China, notwithstanding increased export availabilities from major suppliers.

Traditionally eating pork in China is considered to be a sign of affluence with pork meat the preference for the rising middle classes. Increasing urbanization and disposable income have led to a rapid rise in pork consumption in the country. In 2015 recorded total 109,905 million metric tons of pork were consumed worldwide and by 2017, half the world's pork was consumed in China. Currently, China is the world's largest pork consumer.

In China, pork is preferred over beef for economic and aesthetic reasons; the pig is easy to feed and is not used for labor. Domestic pigs also feed on human waste, thus reducing the cost of feeding and helping in recycling.

A team of Dutch food engineers at Vaess  has introduced VascoPrime, a “primer” for plant-based sausages from slipping out of their casings. In addition,... Read More