You are in : All News > A UK vegan retail surge? Tesco tips vegan food as “biggest culinary trend of 2018,” as Christmas ranges boosted 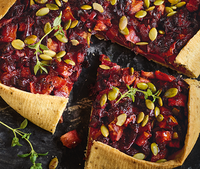 11 Dec 2018 --- With veganism hailed the “fastest growing culinary trend of 2018,” according to Tesco, retailers have increased their range of plant-based Christmas dinner centerpiece dishes. 2018 will likely be known as the year that veganism turned mainstream as more shoppers continue to adopt vegan, vegetarian and flexitarian diets and record numbers are set to enjoy meat-free feasts during the festive season this year.

Tesco recently predicted that one in five guests would be preparing a meat-free Christmas dinner for guests this year. While turkey still rules the roost on the big day, vegan products and meals are becoming much more mainstream.

From Courgette Pizza Crusts and Porcini Mushroom Powder to vegan cheese and ready meals – vegan and vegetarian products are growing in popularity with shoppers across Britain, regardless of whether they follow a strict vegan diet or not. Twenty-one percent of people now identify as flexitarian according to research by Waitrose & Partners in this year’s annual Food & Drink Report.

In 2018, the demand for chilled and frozen vegan food at Tesco soared by more than 50 percent, helping to swell the UK meat-free market to £310 million (US$391.6 million), reports the retailer. News of the Tesco move comes as Waitrose & Partners reports that its vegan party food range is proving popular with customers with sales up by 20 percent since the initial launch in October.

Plant protein is booming and so this year there is an abundance of vegan plant-based, meat and dairy-free products on offer covering all manners of categories from confectionery to snacks. Tapping into vegan trends, a number of companies – from retailers’ own label to giants like Quorn – have come up with vegan or vegetarian versions of Christmas dinner centerpieces.

Vegan eating patterns have emerged from a relative niche position to one gaining increasing attention among consumers, the media and the food and beverage industry. New food and beverage launches with a vegan positioning found an average annual growth rate of 45 percent globally (CAGR 2013-17) when 2013 is used as a base of 100, Innova Market Insights analysis has shown.

Manufacturers, suppliers and now retailers are now tapping into vegan innovation as demand for new vegan-friendly products gathers pace across a multitude of categories, from dairy to beverage, plant-based products to grains, the meat substitute sector to frozen desserts and more.

There’s still space for innovation as demand for vegan shows no sign of slowing down. In fact, gravitation towards plant-based diets in general, along with interest in vegan, vegetarian and flexitarian lifestyles as well as concerns over animal welfare, have together served to increase interest and NPD has subsequently seen an 11 percent (CAGR 2013-2017) increase, according to the market researcher. Growing consumer interest in health, sustainability and ethics are driving plant-derived ingredients and products into high popularity. 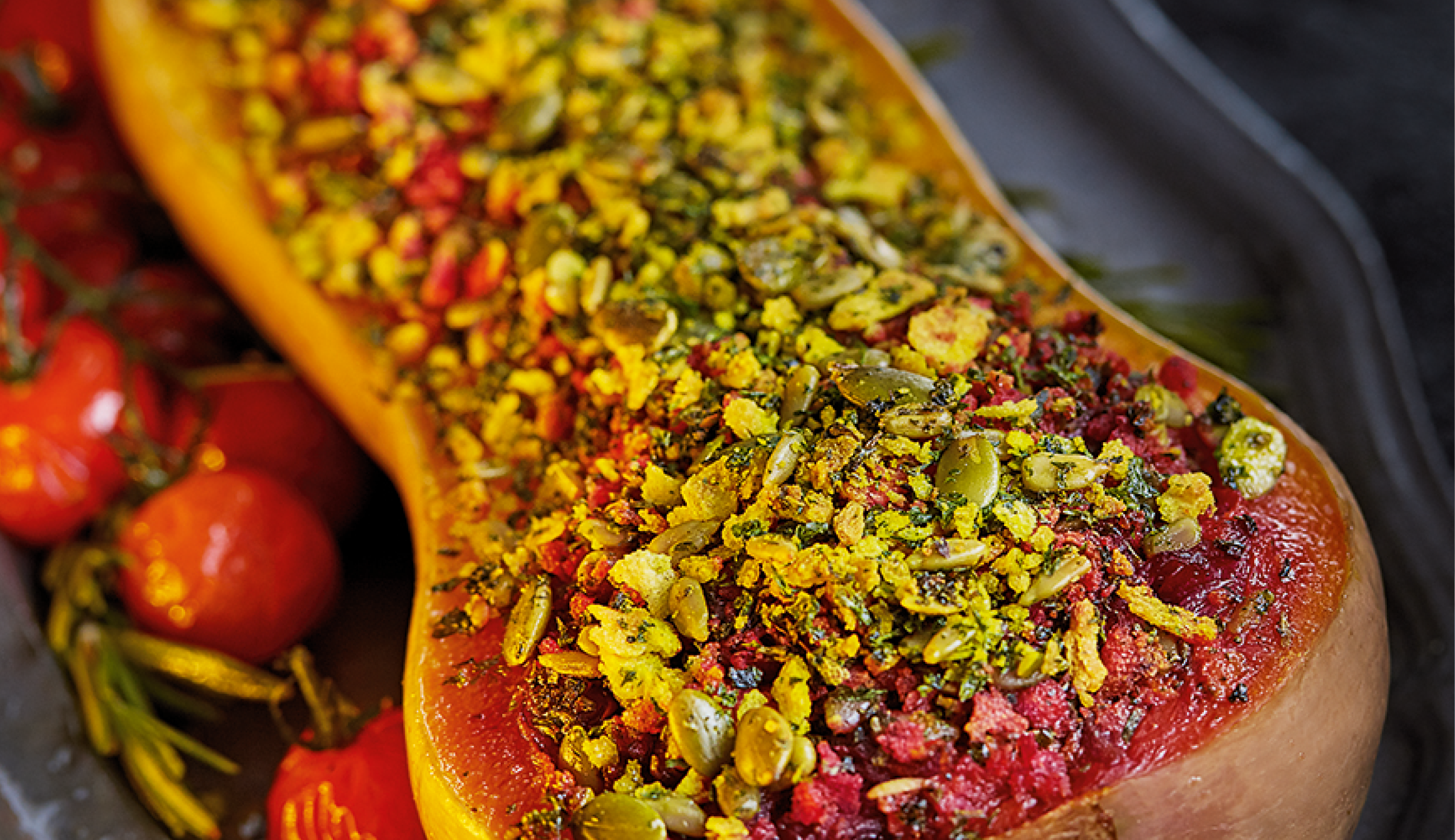 As part of The Plant Kingdom trend prediction, the market researcher states that “the plant-based market shows no signs of slowing down and companies and brands are greening up their portfolios to attract mainstream consumers who want to add more plant-based options to their diets. For the mainstream consumer, going plant-based is about achieving a healthy and sustainable balance between meat and vegetables, rather than adopting an all-or-nothing way of eating.”

In response to these trends, Tesco has not only doubled its vegan festive main dish offerings but has now also launched its first ever range of vegan party food as well as a Christmas vegan sandwich.

The vegan Christmas centerpiece dishes from Tesco are:

Last year, Tesco appointed Chef Derek Sarno as the Director of Plant Based Innovation to oversee the creation of its own Wicked Kitchen vegan food label.

Sarno says: “People looking for plant-centered options for holiday meals no longer need to worry about being considered an afterthought at the Christmas dinner table or party.”

“In fact, the only thing they’ll need to consider is making sure these mouth-watering dishes don’t get snatched from under their noses by other guests,” he notes.

“From party food treats to doubling the number of vegan centerpieces, vegans have never had more choices at Christmas than now,” he adds.

Another example of plant-based festive dining comes from Iceland, which has launched a “meal for one” No Turkey Christmas Dinner to keep pace with the rising demand from the growing number of vegetarians, vegans and flexitarians. The meat-free meal contains strips of mushroom and soy protein with butternut squash, kale, chestnuts, wild mushroom and sage gravy.

Sales of vegan canapés from Waitrose & Partners such as Jackfruit tacos’ and Butternut Squash’age Rolls are proving particularly popular, as is the Beet Wellington – a vegan take on Beef Wellington, the premium retailer notes. 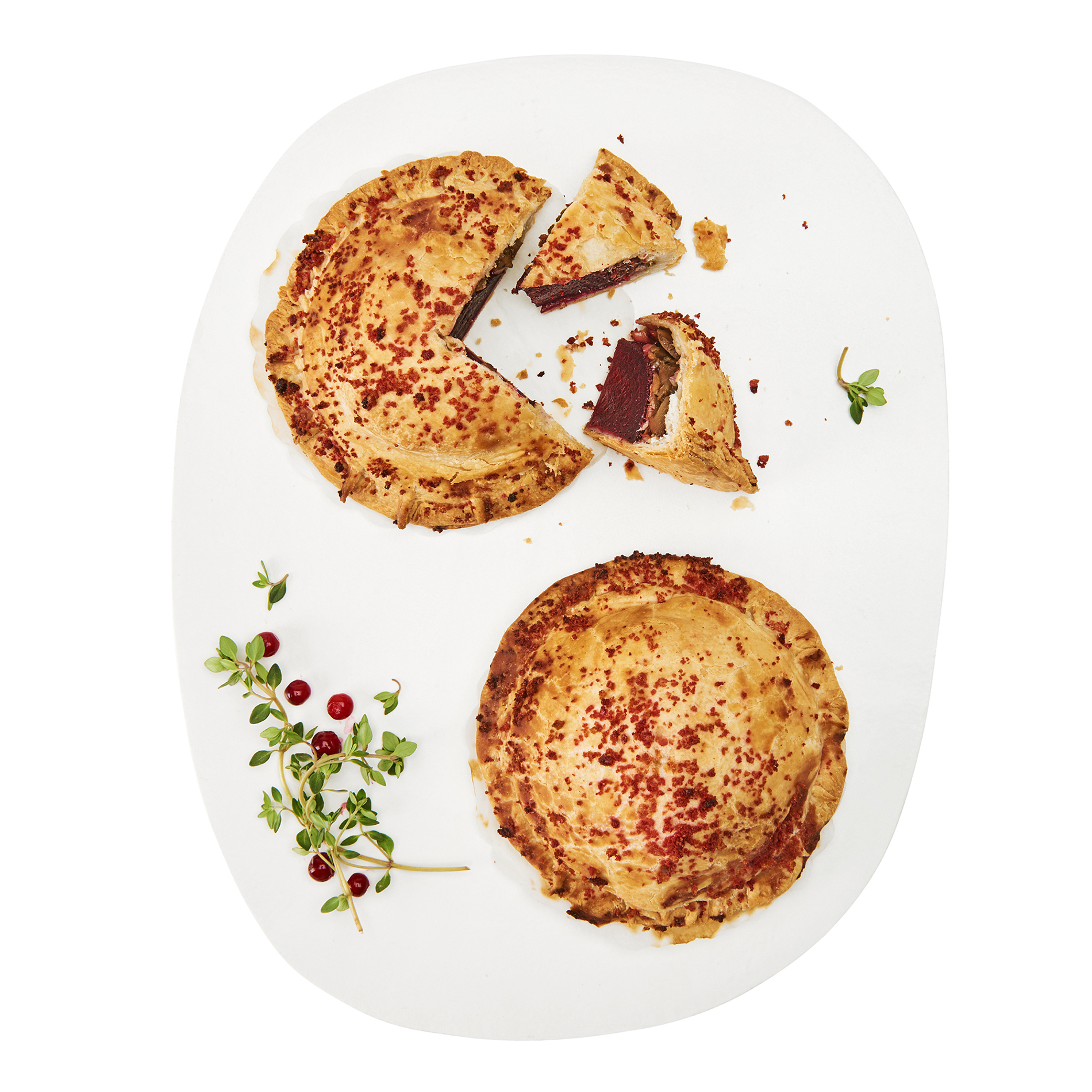 Beet Wellington – a vegan take on Beef Wellington, from Waitrose

Vegan Parmentier Potatoes with Wessex Stout and Vegan Chargrilled Sprouts with Smoked Paprika will also be gracing tables this Christmas as vegans are offered the widest range of dishes to choose from this year, says Waitrose & Partners.

Shoppers are also expected to turn their hand to cooking vegan Christmas recipes at home this year, taking inspiration from Waitrose.com where the search for “Christmas vegan” is up by 225 percent compared to the same time last year.

Chloe Graves, Waitrose & Partners Chilled Vegetarian and Vegan Buyer comments: “We expect sales to culminate in an all-time high as we prepare for arguably the most important meal of the year – the Christmas dinner.”

“We’ve worked really hard as a team to develop a delicious Christmas range that shows how vegan and vegetarian food can be full of flavor. We hope our customers now feel there is no need for those with food preferences or speciality diets to feel like they’re missing out during the festive season,” Graves notes.

As we hit just over the halfway mark on Veganuary, consumers in record numbers commit to ditching meat and dairy for January, while The Vegan Society kicks off a novel... Read More