You are in : All News > Test Identifies Added Sugar in Food 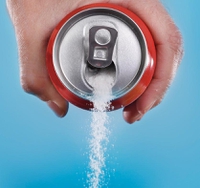 12 Sep 2016 --- A new test, enabling scientists to identify added sugars in foods for the first time, launches in Palo Alto. The Sugarwise certification program uses this test to award a kitemark to those products low in added sugar helping people quickly identify them. It has been hailed as one of the most important breakthroughs in the fight against the negative health effects associated with high sugar intake.

The groundbreaking technology developed by Sugarwise to measure added sugar in foods is to begin use in the US. Following on from the new FDA guidelines on food labelling, the technology is claimed to be the only way of independently measuring added sugar without requiring recipe information from manufacturers. Chief Scientist, Vinicius Ferreira, from Caltech developed the method working with Cambridge University Scientists.

Sugarwise, which says it was the first UK company to move its headquarters to the US following the Brexit vote has been warmly received by American health campaigners. Today major campaigners will announce their intentions to collaborate at this event in Palo Alto. On Friday 9th September the new system becomes available throughout the US.

Vinicius Ferreira, Sugarwise Chief Scientist said: “An overwhelming majority of the American population far exceeds their added sugar target on a daily basis. Obesity levels are soaring and sugar related illness is rising rapidly. We have developed the test and certification to help people take control of their sugar intake. If Sugarwise encourages the food industry to address added sugar content the knock on effect could be huge.”

The Caltech scientist notes: "We have to start drawing a distinction between added sugars and overall sugars, because added sugar content, rather than the total sugar content currently displayed in nutritional labels, is the critical measure of the quality of a food's nutritional profile. Foods high in added sugar are almost universally deficient in other nutrients and fibre, and when the population starts getting a large proportion of their daily calories from foods high in added sugar, they fail to meet their daily requirements for nutrients and fiber.

Moreover, foods high in added sugar are typically digested faster and lead to more frequent feelings of hunger. To get the most 'nutritional bang for your buck' Sugarwise promotes consumption of foods low in free sugars, and, to cut through the noise and misinformation regarding sugars, my scientific colleagues and I have developed a new 'Sugarwise' standard to evaluate foods. Foods that meet our criteria will carry our Sugarwise brand, which will enable consumers to easily and quickly identify products that are truly 'Sugarwise'"

Rend Platings, Sugarwise Founder, said: “I was shocked to hear my daughter’s generation may live a shorter life than their parents. It’s not that we don’t know about the dangers of sugar, we do; the problem relates to our lack of access to healthier choices. I am hoping that Sugarwise will have the potential to change things in the same way Fairtrade and Organic labels have – both have successfully driven up demand and availability of products in their categories. We would all benefit if the same was the case for low added sugar products.”

Dr Tom Simmons, University of Cambridge: "Added sugars are accompanied by less fibre and other nutrients that can be found in the whole food. Therefore, they are less likely to suppress appetite and consequently people who consume a diet high in free sugars are more likely to consume too many calories and gain weight. We still have to be aware of salt, fat and total sugars but added sugars are the big food issue of our time. They are arguably the most important issue where there is the largest potential to positively impact health by changing the added sugars profiles of our foods, especially if these changes can be made in the manufacturing process."

A video briefly describing the technology can be found here.

Fat & lubrication: Scientists explore what happens in the mouth when chocolate is consumed

Scientists have decoded the physical process when a piece of chocolate is eaten, as it changes from a solid into a smooth emulsion in the mouth. The researchers found... Read More