You are in : All News > Study Investigates “Emotional Reaction” to Eating Insects 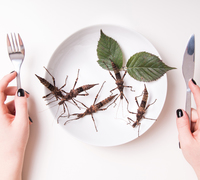 01 May 2017 --- There is a whole school of thought that edible insects can provide a whole new source of sustainable protein. In 2013 the United Nations Food & Agriculture Organization stressed that a new approach to food production was crucial if we are to avoid future shortages - and its suggestion was edible insects.

The sustainability credentials of insects is what lead the UN to highlight them as the potential future of food, requiring minimal resources to farm and producing substantially less waste than conventional livestock.

Despite the fact that around two billion people around the world already consume insects as part of their regular diet due to their high nutritional value, versatility and flavor, plus a recent burst of product innovations in terms of insect protein bars, drinks and powder products – there are still big question marks over whether Western consumers will ever really take to consuming insects.

A study conducted by researcher Muriel Verain from Wageningen University & Research recently found that there is no difference to general attitudes towards eating whole insects or processed insects. She conducted research into the opportunities for eating beans, seaweed and insects, revealing that eating insects is still very much at the outset.

She says that although beans, seaweed and insects are valuable alternative sources of protein, when it comes to consumers accepting insects – processed or otherwise – we still have a long way to go in the Western World.

“People don’t want to, or they find it disgusting. It also makes almost no difference whether it’s whole or processed insects,” she says.

“If you are going to eat insects, these are usually mealworms, locusts and crickets. You can also look at insects as feed for animals, for instance; but this would concern other insects. Both avenues were examined in the research.”

Part of the study involved a diverse collection of respondents spread over seven treatments. People were asked about their intention to eat insects in various forms including four options concerning eating insects yourself: general, freeze-dried, fried or processed into a product. Consumers were also asked about beef hamburgers made from the meat of cows that had been fed insects, and regular hamburgers, as a comparison.

The test divided emotions into two categories: positive (happy, proud, satisfied) and negative (angry, guilty, sad). Disgust was also a possible reaction. While it was expected people would be more open to products with processed insects, Verain found few differences between the four insect-based products.

Emotions were also striking regarding hamburgers from cows that had eaten insects. People were certainly not positive about it.

“For example, people thought hamburgers from cows that have eaten insects would be harder to prepare and would be less tasty compared with normal hamburgers,' says Verain. 'Beef apparently isn’t just beef,” adds Verain.

The feelings of disgust associated with eating insects was greater than with eating hamburgers, even if these are hamburgers from cows that have eaten insects.

The research also found that emotions ran higher for people who have never even tried insects. These people experienced even more negative emotions and disgust.

However, there were some positive views, in that eating insects is healthy, sustainable and natural, and that it would result in a healthy weight. Despite that, people saw insects as less safe than beef.

“There's still a long way to go as far as insect consumption is concerned. I would think eating insects is certainly an option for cattle feed in the short term. In the long term, invisibly processing insects into products instead of using whole, visible ones seems the best step toward getting people into insects.”

However, changing social attitudes towards consuming insects is extremely challenging.

Of the participants in the study, only 15% had tried insects once, and another 35% were open to it.

“That means half of people are willing to try insects. Social standards are significant when it comes to people's intention, and eating insects clearly has a cultural aspect. What do people around you think you should be doing?”

Verain also noted how standards change over time. “Look at smoking and peer pressure. Starting to smoke used to be cool, but now things have changed, albeit gradually. It called for a range of measures, coupled with laws and regulations from the government. It will take some time for insects, too. We can explore different avenues in the meantime, such as insects as cattle feed and eating beans and seaweed. While not everyone in the Netherlands has to start eating insects, it’s good if it’s one of the options, so that people start varying their diet more.”

Despite the emotional feelings towards eating insects, they are still part of the trending alternative protein space and will continue to be so as more innovations come online.

Earlier this year FoodIngredientsFirst detailed some of these alternatives, including insects. For more information, read more.