You are in : All News > Nestlé sees returns on Starbucks coffee tie-up in nine-month sales report 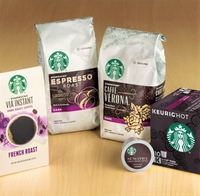 17 Oct 2019 --- Nestlé has released its nine-month sales report for this year, outlining growth driven by the global release of its first coffee line under the Starbucks brand name. The company continues to see positive returns in its plant-based offerings category, following the company’s divestment of its cold cuts and meat-based products, which was made in a bid to keep pace with current consumer trends. The strategic review of the Herta charcuterie business is ongoing and expected to be completed by the end of the year.

“We continue to see good momentum in the US, which is our largest market. Nestlé’s growth was supported by investment behind our brands, rapid innovation and disciplined execution. During the third quarter, the roll-out of Starbucks products continued, now reaching 34 countries,” says Mark Schneider, CEO of Nestlé.

Nestlé’s divestment strategy of its Herta charcuterie business was announced last February in a bid to further position its portfolio toward attractive high-growth plant-based categories. At the same time the company pivoted its businesses to changing market conditions by unveiling its first coffee lines under the Starbucks name, which comes after Nestlé closed a US$7.15 billion licensing deal to market Starbucks Consumer Packaged Goods and Foodservice products globally. The newly launched Starbucks products saw strong demand this year through expansion into new countries.

Year-on-year growth acceleration was supported by the US and Brazil. Europe, the Middle East and North Africa (EMENA) contributed to the improved momentum with strong mid single-digit RIG in the third quarter. The Asia, Oceana and Africa (AOA) region saw solid growth despite softness in some categories in China. Organic growth was 2.7 percent in developed markets, supported by strong RIG. Growth in emerging markets was 5.0 percent.

Highlights of the report include:

Zone Americas (AMS)
The transition of the US pizza and ice cream businesses from a frozen Direct-Store-Delivery system to a warehouse distribution model is fully on track, the company notes. Ice cream grew at mid single-digit rate, with strong performances by Häagen-Dazs and natural, Outshine bars. Frozen food posted low single-digit growth, supported by pizza, Hot Pockets and Stouffer's.

Zone Europe, Middle-East and North Africa (EMENA)
Coffee saw positive growth with high single-digit RIG in the third quarter, helped by the launch of Starbucks products across 20 countries in the Zone. Confectionery maintained good momentum with double-digit growth for KitKat. Vegetarian and plant-based food products posted double-digit growth, supported by the launch of the Garden Gourmet Incredible Burger in 10 countries across the Zone.

In North America organic growth was flat. Premium brands S.Pellegrino, Perrier, and Acqua Panna saw double-digit growth as they benefited from a strong innovation pipeline focused on flavored and functional offerings. The ReadyRefresh direct-to-consumer business grew at a mid single-digit rate, helped by pricing and a new user-friendly online platform. The lapping of the 2018 price increases weighed negatively on growth for the case-pack format and Nestlé Pure Life.