You are in : All News > Food from air and electricity: Finnish scientists pioneer protein to develop “new era of food diversity”

09 Jan 2020 --- Finnish food-tech company, Solar Foods, has pioneered a breakthrough biotech solution, Solein, which enables natural protein production anywhere by using air and electricity. The scientists say it will compete with soya on price within the next ten years and could be the answer to tackling environmental problems often associated with farming and the livestock sector. The breakthrough comes at a time when slowing climate change is crucial with a sharpened focus on the food industry to step up to the challenge.

Solar Foods, which declares “conventional food production is running out of time,”' has developed Solein, a unique single-cell protein produced using water, CO2 and electricity. A fully natural fermentation process similar to the production of yeast or lactic acid bacteria is used and instead of causing CO2 emissions. Solein binds carbon dioxide.

If the electricity used comes from solar and wind power, the food can be grown with almost zero greenhouse gas emissions, note the researchers. However, the price of electricity is a key factor.

Solein is a plain protein flour that can be used as a neutral additive across a range of foods, including being used in nutritious food ingredients, plant-based meat alternatives and cultured meat.

Its composition is 65-75 percent protein, 10-20 percent carbohydrates, 4-10 percent fat and 4-10 percent minerals. Solein uses 100 times less water than plant production and up to 500 times less than the production of beef, according to Solar Foods. While land use for Solein is 60 times more efficient than for plants, and 1,000 times more efficient than for beef.

Food production and agricultural land (particularly habitable land used for livestock) use are large contributors to greenhouse gas emissions. Over the past few years, the connection between food production, food security and the rapid onset of climate change have been in the spotlight, putting increasing pressure on the F&B industry to discover alternative processes and ingredients for the global population.

Scientists around the world have been warning about the devastating environmental impacts of continuing with current food production processes and systems, calling for global dietary changes. These include reduced meat consumption and creating new ways to ensure food security for the world’s ballooning population, expected to reach 9.8 billion by 2050.

In November 2018, an in-depth report from the InterAcademy Partnership (IAP) called for a total transformation of how systems operate as agriculture and consumer choices are major factors driving “disastrous climate change.”

This closely followed a stark warning from Intergovernmental Panel on Climate Change (IPCC) about the urgency to limit global warming to 1.5°C which would require “rapid, far-reaching and unprecedented changes in all aspects of society.” 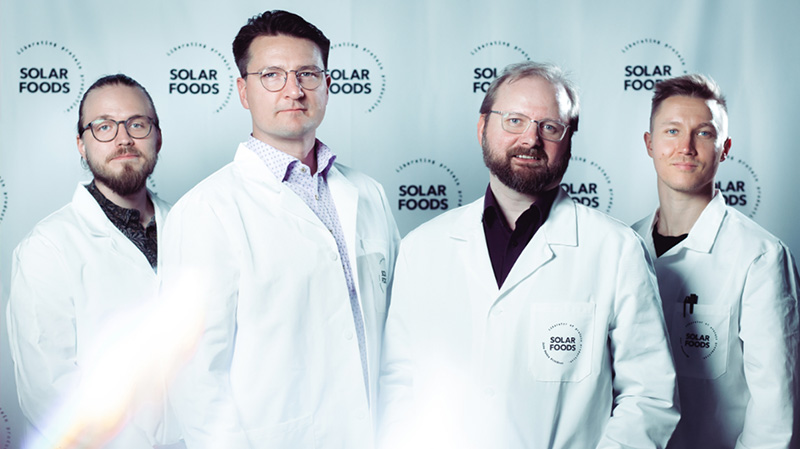 Click to EnlargeTeam of scientists from Solar Foods.Scaling-up and going commercial
Solar Foods has a roadmap laying out the timeline of its strategy for a full-scale factory of carbon-neutral protein production. Although it’s in the relatively early stages of its journey, Solar Foods aims to achieve novel food authorization within the EU by 2022. This year will mark the closing of Series A funding. It forecast a global launch in 2022 and revenues in the region of US$800 million by 2023.

“Making food from thin air” is expected to be a growing theme throughout 2020 as the journey toward transforming the way food is produced continues to gather momentum, driven food innovators pushing the boundaries.

Last November, US-based Air Protein spoke with FoodIngredientsFirst about its probiotic production process that converts elements from the air into nutrients.

In this space, Aleph Farms completed its first slaughter-fee meat experiment in space and in August and US start-up Sustainable Bioproducts (SBP), unveiled its plans to revolutionize the alternative protein market with its breakthrough biotechnology. Backed by investment from the likes of Archer Daniels Midland (ADM) and Danone, SBP has developed a new way to grow edible proteins, emerging out of fundamental research into extremophile organisms that live in Yellowstone National Park’s volcanic springs.