You are in : All News > Cheers to that: Carlsberg achieves a 76 percent reduction in multi-pack plastic

Cheers to that: Carlsberg achieves a 76 percent reduction in multi-pack plastic 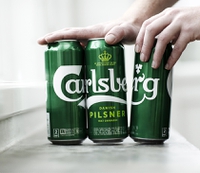 07 Sep 2018 --- This week, in its home of Copenhagen, the Carlsberg Group unveiled the new Snap Pack: an innovation that replaces the traditional, bulky plastic rings that accompany multi-packs of beer with a pioneering solution that instead bonds beer cans together with recyclable glue. The technology is set to reduce plastic waste globally by more than 1200 tons a year – the equivalent to 60 million plastic bags, according to the Danish brewery.

The Snap Pack is a world first for the beer industry, reducing the amount of plastic used in traditional multi-packs by up to 76 percent. The Snap Pack holds Carlsberg Expørt cans together with small pieces of a specially developed glue in small dots, which are easily snapped apart when required, but robust enough to stand up to handling to and from the store.

Speaking to PackagingInsights, Kasper Elbjorn, Director International and Danish Media from Carlsberg explains how finding the sweet spot between durable and easy-to-open glue was the most challenging R&D point: “We started the journey three years ago when one of our partners, a company owned by KHS, came to us with a proposal on how we might be able to reinvent our multipacks. We started the development together, and it became clear that we had to come up with the right composition of the glue itself.”

“It needs to be strong and robust so it can withstand transportation from the brewery to the supermarkets and the consumer's homes. But it also needs to be easy to separate for the consumer. There were 4,000 versions of this glue before we found a good solution: a mix between strength and easy-to-open. This was the biggest R&D challenge: to find the sweet spot,” Elbjorn adds.

Using minimal plastic and limiting waste, as well as reducing CO2 emissions and the reliance on fossil fuels, the Snap Pack aims to reduce the Carlsberg Group’s global plastic usage by more than 1,200 tons – from brewery to store – annually once the roll out onto all four, six and eight packs across all Carlsberg variants globally. The technology cannot be used on larger packs – such as the 24 packs – Elbjorn tells PackagingInsights, but the company are looking into alternative solutions.

"We always strive to improve and today’s launch clearly shows our ambition to follow in our founder’s footsteps towards a better tomorrow. Carlsberg's Snap Pack will significantly reduce the amount of plastic waste, and we look forward to giving our consumers better beer experiences with less environmental impact,” says Cees ‘t Hart, CEO of Carlsberg Group.

The Snap Pack is just one of Carlsberg’s sustainable packaging solutions. Other improvements include:

Elbjorn tells PackagingInsights that removing the plastic handle from the packs was not an option for the brewery, despite its wishes to do so. Consumer feedback was strong: there needs to be a handle. Carlsberg will now also work toward creating a more sustainable option, as the current handle is made from virgin plastic.

“We’re incredibly proud to launch the new Snap Pack; we’ve been working on this innovation for the last three years as we continue to search out ways to be better as a business. Our challenge is to continue to provide great tasting beer, whilst significantly reducing the use of plastics in our supply chain. We know this is an on-going issue, not just in the UK but globally, and while we will always be looking for new ways to reduce Carlsberg UK’s future impact on the environment, the introduction of the Carlsberg Expørt Snap Pack marks a significant plastic reduction today,” says Liam Newton, Vice President Marketing, Carlsberg UK.

The Snap Pack, initially launching in the UK on 6 x 330ml Carlsberg Expørt cans, will be available from 10th September exclusively to Tesco in over 500 stores nationwide.

Wider sustainability efforts
Carlsberg Group’s research and development teams have worked closely with external partners to innovate in ways that will make a difference to both consumers and the climate.

To accelerate the implementation of its sustainability ambitions, Carlsberg also announced a strategic partnership with Plastic Change, a Danish environmental organization, in addition to its long-standing dialogue with the WWF on sustainable issues and their impact on both the environment and the world’s natural resources.

”Our wildlife is drowning in plastic – and the problem is, unfortunately, growing considerably. We, therefore, need to act now. We need less plastic to end up in nature. That is why we consider it huge progress that Carlsberg is now launching solutions that significantly reduce the amount of plastic in its packaging. With these new solutions, Carlsberg has taken the first big steps on the journey towards a more clean and green future,” says Bo Øksnebjerg, Secretary General in WWF Denmark.

To celebrate the launch of the Snap Pack, Carlsberg unveiled its own unique version of Copenhagen’s Little Mermaid statue made entirely from its new Snap Pack cans. Held together with glue just like the Snap Pack cans, the mermaid ‘canstruction’ embodies Carlsberg’s intent to make beer that is not only great tasting but is also better for the marine environment.

15 Jan 2021 --- This week, PepsiCo revealed plans to double its climate action goals and pledged net-zero emissions by 2040. Campbell Soup announced it would close its Georgia, US... Read More

18 Dec 2020 --- Bunge Loders Croklaan (BLC) has received a “no questions” letter from the US Food and Drug Administration (FDA) in response to its Generally Recognized... Read More

16 Dec 2020 --- The events of 2020 and the on-going COVID-19 pandemic continue to push demand for organic and sustainable foods. Sustainability and eating healthy foods were key... Read More