You are in : All News > Agropur Reports Strong Earnings Growth 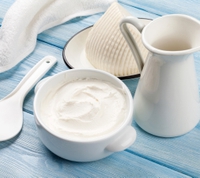 13 Feb 2017 --- North American dairy industry leader Agropur Cooperative has announced that revenues for the fiscal year ended November 1, 2016 amounted to nearly $6 billion. Earnings from operations grew by $105.7 million or 34.6% to $411.7 million. Net earnings before patronage dividends increased 63.1% to $154 million. The Cooperative therefore declared patronage dividends of $60.1 million, a 50% increase. The US component of revenues continued to grow, increasing to 44.3%.

The Annual General Meeting was Serge Riendeau's last as President of Agropur, closing a 15-year tenure(2002-2017). "I am proud of the work we have all done to support our Cooperative's development, always with a view to securing its future," said Mr. Riendeau. "Agropur's performance is the result of the sum of all the initiatives we have taken in recent years: our mergers and acquisitions, our cost-cutting programs, our major investments in our brands and in our facilities in both Canada and the US. We are prouder than ever of our business model, which helps spread the wealth and develop local communities. I leave the presidency of Agropur confident that our Cooperative rests on solid foundations that will undergird its future development."

"We are very pleased to be reporting substantially improved earnings in 2016," said Robert Coallier, CEO of Agropur. "The encouraging numbers reflect the wide-ranging improvement efforts and successes of our 8,000 employees in a still-uncertain market environment. Our sustainability depends on our growth. Having risen to the ranks of the world's top 20 dairy processors and established a clear development strategy, we intend to continue our expansion in order to remain a major player in a fast-consolidating industry. Our actions of the past few years have positioned us to face the future with confidence."

For the second year in a row, Agropur was Canada's most trusted dairy brand on the Gustavson Brand Trust Index. In addition, Natrel topped the rankings in the fine filtered, lactose free and organic categories, while OKA has grown its volume by 75% since its repositioning 2013. Olympic and iögo posted the strongest growth in the fresh dairy products category with 10% and 6% increases respectively, compared with a 3% average.

Agropur took a major step during the year by announcing that all made-in-Canada products sold under its own brands would henceforth contain 100% Canadian milk and dairy ingredients, and bear the Dairy Farmers of Canada "Quality Milk" certification logo. Agropur products displaying the logo will make their appearance on grocery store shelves in the coming weeks. The move is responsive to consumers who want to know where the products they consume come from and who would like to support local producers.

Following up on a sustained effort over the past several years to develop a structure and culture of innovation within the organization, Agropur created Inno Agropur in 2016 to help it exceed consumers' expectations and power its development. Agropur also launched Inno Challenge, an open innovation initiative aimed at reinventing dairy. It is a Canadian first in agrifood innovation. More than 60 participants submitted projects and three concepts have been selected for co-development in the coming weeks.

In 2016 the focus was on integrating the numerous acquisitions of recent years. Nevertheless, Agropur made substantial investments totalling $150 million in its manufacturing facilities in Canada and the US. Among other things, Feta production capacity at the Weyauwega plant was increased in order to strengthen Agropur's leading position and keep it number one in Feta production in the US. The recent acquisition of Scotsburn's assets will expand Agropur's footprint in the ice cream and novelties market and position it to better serve its customers and consumers.

During the year, Agropur opened its new head office in Longueuil, Quebec, now home to more than 850 employees. The new home base keeps Agropur's decision-making centre in Quebec for the long term.

Agropur is a North American dairy industry leader founded in 1938.With sales of $4.6 billion in 2019, the Cooperative is a source of pride to the 3,161 members and 8,800 employees who work together in pursuit of a shared goal: “Better Dairy. Better World.” Agropur US Operations boast eight ingredients-focused, SQF Certified plants located throughout Midwest with international support in Canada, Mexico, Switzerland, China, Netherlands and Singapore. Due in part to being North America’s largest producer of whey protein and a quality-focused contract manufacturer, Agropur Ingredients is behind some of the most prominent food, beverage and nutrition brands in the industry providing future-forward solutions for cost performance, texture improvement, shelf-life stability and nutrition enhancement.

01 Jun 2020 --- The space of bioprotection has seen renewed interest in novel fermented cultures solutions. Suppliers are breaking new ground in the plant-based sector, where... Read More