You are in : Courtauld Commitment Shows Milestones and Failures in Food Waste Fight 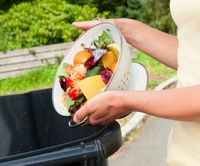 11 Jan 2017 --- There’s renewed vigor in the fight against food waste after new figures from campaigners WRAP, which developed and managed the Courtauld Commitment (CC3) agreement on behalf of UK governments, show that £13 billion (US$ billion) of edible food was needlessly thrown away from homes in 2015, the equivalent of 7.3 million tons. Meanwhile new findings from the (CC3) show some important milestones have been achieved in addressing food waste in the UK.

Over 50 signatories took part in the CC3 and together helped deliver against three ambitious targets for the period between 2012 and 2015. These included to reduce food and packaging waste by 3 percent in manufacturing and retail; to improve packaging design and recyclability in the grocery supply chain without increasing the carbon impact; and to reduce household food and drink waste by 5 percent.

The manufacturing and retail target was met in full meaning grocery ingredient, product and packaging waste is down 3 percent. This equates to 219,000 tons of food and packaging waste prevented and representing a CO2e saving of 555,000 tons over the lifetime of the commitment; the value of the food savings alone were worth an estimated £100 million (US$ million).

According to WRAP (Waste & Resource Action Program), more waste had moved up the waste hierarchy as the recovery and recycling rate grew from 95 percent in 2012 to 99 percent in 2015, the equivalent to 89,000 tons of material in 2015. The data suggests that signatories have achieved a significant increase in the amount of surplus food and drink redistributed for human consumption in 2015 (18,000 tons).

The packaging target was exceeded. This aimed to stop any increase in the impact of packaging in terms of carbon emissions by 2015. Data shows a reduction at end of the agreement of 7 percent, significantly better than the target outcome while the amount of packaging material placed on the market increased by 1 percent over the same period, to just under three million tons.

The main contributing factors for this fall were increased recycling rates for different packaging materials and changes in materials composition, where wood, polymer, aluminium and steel packaging have seen reductions both in total weight placed on the market and CO2e impact.

These have reduced the pressures for people to avoid wasting food and it’s clear that campaign activities need to reach more people, says WRAP.

Under Courtauld 2025, a targeted approach to reducing household food waste is being developed by WRAP’s consumer campaign Love Food Hate Waste. WRAP will work with Courtauld 2025 signatories to investigate potential high-impact ways of helping consumers make best use of the food they buy.

Changes that consumers could see in the future include:

“The three phases of Courtauld have been a game-changer in bringing businesses together to work on issues of resource efficiency and drive change within their own operations. Today’s results show the industry’s commitment to reducing their environmental impacts and the huge benefit of collaborative action, particularly in the supply chain,” says Steve Creed, Director of Business Programs at WRAP.

“Reducing food waste in the home is incredibly challenging, given the complex reasons for it, the scale of food waste in the home and the lack of awareness, but it’s clear we all need to do more. WRAP has a plan to work with governments, signatories and consumers for greater public engagement through Love Food Hate Waste and interventions by signatories to Courtauld 2025.”

Environment Minister Thérèse Coffey also recognizes the progress made by industry to tackle food and packaging waste in the supply chain, but also says much more needs to be done.

Meanwhile, Arla Foods UK, one of the founding signatories, welcomes the extension of the Courtauld Commitment 2025 which challenges its signatories to achieve 20 percent reductions in food and drink waste, greenhouse gas from food and drink consumed and a reduction in the impact associated with water use in the supply chain.

“As a founder signatory, Arla Foods UK is proud to play a leading and managing role in the development of The Courtauld Commitment 2025, and to be collaborating with both WRAP and the important names in our sector,” says Managing Director of Arla Foods UK Tomas Pietrangeli.

“We are heavily involved in the overall Courtauld steering group and co-chairs of the Dairy Working Group. In addition we have been highlighted as one of the major players looking at waste mapping by WRAP. Therefore we are well positioned to see first-hand the huge amounts of work that has already gone into the development and implementation of this agreement. We are pleased about the continued growth of the commitment, which now influences 95 percent of the UK food retail industry.”

07 Apr 2021 --- Scientists are reporting a new way to extract the protein and fiber from brewer’s spent grain and use it to create new types of protein sources. Homebrewing... Read More