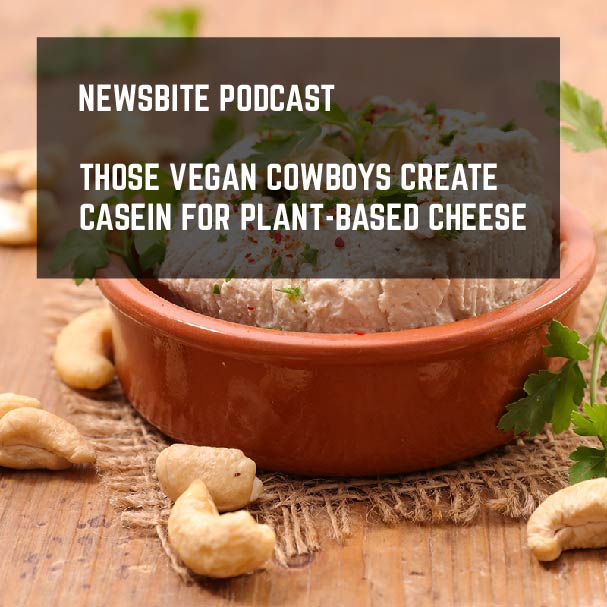 In F&B developments this week, Those Vegan Cowboys, a Belgian company founded by former owners of The Vegetarian Butcher, shared insights on replicating dairy casein in plant-based cheeses. US plant-based retail hit US$7 billion, while Nestlé & Beyond Meat doubled down on alt-meat production in Asia. Meanwhile, Kemin inked a deal to acquire Proteus Industries and Agrumaria Reggina announced plans for its first R&D center in Northern Italy.

Displaying Results for : Latest Podcasts | All

In F&B developments this week, Givaudan Taste & Wellbeing launched its Aroma Kiosk, a digital sensory tool designed to gather consumer insights on flavors and products in real-time. Consumption of animal-based produce in the US and Europe was forecasted to dip after hitting a “peak meat” apex in 2025,... Read More

Swedish oat milk maker Oatly announced plans to go public by filing for an IPO in the US. Dairy-free yogurt producer Alpro has added its voice to a coalition of nearly 100 plant-based proponents speaking out against the EU’s push to broaden the variety of banned “dairy-like” expressions in milk-free... Read More

This week, Nestlé continues its plant-based pivot with a major portfolio boost –  the launch of the first vegan KitKat which is on the horizon for later this year. Interest in chocolate and cocoa ingredients is typically rising as consumers continue to turn to chocolate as a way to indulge. Meanwhile, CARE... Read More

In this week’s NewsBite we recap some of the latest industry-related stories from the last few days. Significant highlights include new applications for marine ingredients, activities in the start-up incubator space and new technological strides in cellular agriculture.

In this week’s NewsBite, we recap some of the latest industry-related stories from the last few days. Significant highlights include food-tech developments in the spaces of emergent sweeteners, a host of wellness-fortifying offerings and industry’s first “completely different donut texture” inspired by... Read More

This week, FoodIngredientsFirst spoke with Novozymes who discussed its latest enzyme solution for “better tasting” high protein beverages. New Wave Foods completed a US$18 million Series A round to finance the rollout of plant-based shrimp and Mondelez acquired the rest of Hu Master Holdings.

In this week’s NewsBite, we recap some of the latest industry-related stories from the last few days. Among significant highlights are launches of plant-based offerings tapping into the burgeoning APAC market, new upcycling ingredient potential and forecasted flavors for the upcoming year.

Europe’s largest plant-based meat production facility is on course to open in England, while Nestlé makes its official plant-based food debut in China with the launch of Harvest Gourmet, it’s plant-based food brand. Barry Callebaut revealed how it slashed its overall footprint by 8.1 percent in the last... Read More

This week, FoodIngredientsFirst spoke with DDW who discussed its innovations in food colors, including greens and blacks which are gaining popularity. Cultured chicken meat was green-lighted for sale in Singapore as an ingredient in chicken bites. UK-based CPI technology innovation center partnered with 3DBT... Read More

Royal DSM is bolstering its lactase portfolio with a new “one-stop-shop” enzyme for regular and organic lactose-free dairy products, while Beneo reveals its latest precooked functional native rice starch for enhancing clean label claims in foods. GNT predicts the color red will shake up the food and beverage... Read More

The commercialization of Aleph Farm’s cultured steak, grown directly from non-GMO cells of a living cow, is one step closer, with the first phase of its BioFarm’s construction getting underway. In other food tech news, Moolec Science is piloting an emergent concept called molecular farming to bioengineer... Read More

In this week’s NewsBite, we recap some of the latest industry-related stories from the last few days. Highlights include new moves fast food’s transition to plant-based offerings, innovations in cellular agriculture and the unveiling of high-performance alternatives for confectionery ingredients.

In this week’s NewsBite, we recap some of the latest industry-related stories from the last few days. Highlights include new investments in the microbial production of novel proteins, the launch of a new Black Forest ham-inspired flavoring for meats, and a Nestlé acquisition valued at nearly US$1 billion.