You are in : All News > What’s in a name? Most consumers understand the difference between real milk and alternatives, says new survey

What’s in a name? Most consumers understand the difference between real milk and alternatives, says new survey 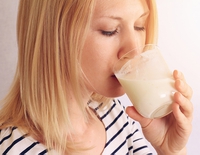 12 Oct 2018 --- A new survey exploring how consumers comprehend the difference between milk and non-dairy alternatives reveals that most people are actually not confused at all. The International Food Information Council (IFIC) Foundation shows a low level of consumer confusion over nomenclature and basic differences between the two. This comes at a time when the US Food and Drug Administration (FDA) is considering a proposal to provide greater clarity on the appropriate labeling of plant-based alternatives.

As the plant-based alternatives market continues to grow rapidly, more products are hitting the shelves with names like “soy milk,” “almond milk” and “vegan mozzarella cheese” – and the FDA wants to get a better handle on how consumers are interpreting and understanding these plant-based products compared to dairy products.

According to the survey, about three-quarters of Americans understand that plant-based “milk” products do not actually contain cow’s milk (75 percent for soymilk and almond milk, 74 percent for coconut milk, 73 percent for rice milk and 72 percent for cashew milk).

Fewer than 10 percent believe that any of those products contain cow’s milk, while the remainder says that they don’t know (20 percent for cashew milk and rice milk, 18 percent for coconut milk, and 16 percent for soymilk and almond milk).

The survey results were taken from online interviews of 1,000 US adults, conducted in August.

Regulating labels
The FDA is calling for a “quick glance” on the label which makes sure the consumer knows what they are buying, which is part of a strategy to modernize standards of identity and the use of dairy names for plant-based substitutes.

“The FDA has concerns that the labeling of some plant-based products may lead consumers to believe that those products have the same key nutritional attributes as dairy products, even though they can vary widely in their nutritional content,” FDA Commissioner Scott Gottlieb has said previously.

“It is important that we better understand consumers' expectations of these plant-based products compared to dairy products.”

There is also a surge in demand for plant-based dairy alternatives in Europe where NPD growth continues despite regulatory constraints on marketing these types of products as milk. The European Court of Justice ruled last June that purely plant-based products cannot be marketed with names such as “milk,” “cream,” “butter,” “cheese” or “yogurt,” which are strictly reserved by EU law for animal products.

However, plant-based dairy alternatives are thriving in European markets, amid a surge in demand for vegetarian and vegan options.

Innova Market Insights data shows that over the last five years, the number of new plant-based dairy alternative drinks launches reported in Europe has grown continuously, with a CAGR (2013-2017) of 19.5 percent. Between 2013 and 2017, soy continues to be the top ingredient for plant-based dairy alternative drinks, however, the market penetration is decreasing. At the same time, almonds and oats show strong growth over the years, with the CAGR (2013-2017) of 39 percent and 36 percent, respectively.

How does food shopping impact the planet? Eco labels on the horizon, say researchers

Consumers could soon be able to check the environmental impact of food before purchasing, thanks to new research from Oxford University, UK. Reliable information of this... Read More