You are in : All News > Weekly Roundup: Saputo strengthens core US business, Lantmännen invests in grain value chain

In brief: Acquisitions
Saputo acquired the Carolina Aseptic and Carolina Dairy businesses, formerly operated by AmeriQual Group Holdings. These businesses, which join Saputo’s Dairy Division under its US Sector, are conducted at two facilities in North Carolina. The purchase price of US$118 million, on a cash-free and debt-free basis, was paid in cash at closing. Carolina Aseptic develops, manufactures, packages and distributes aseptic shelf-stable food products and beverages out of a purpose-built facility in Troy, North Carolina, in the US. Nearby, Carolina Dairy manufactures, packages and distributes refrigerated yogurt in spouted pouches in Biscoe, North Carolina. The acquisition of these businesses will better position Saputo to capture the growing demand for aseptic protein beverages and nutritional snacks.

Lantmännen acquired 10 percent of Hargs Hamn AB. This investment stresses the importance of continued investments in the grain value chain and Lantmännen’s long-term commitment to the port. Further, it can influence further development in a positive direction for grain processing. Lantmännen’s strategic direction moving forward entails continued investments in and the development of its facility in Hargshamn in the next few years. 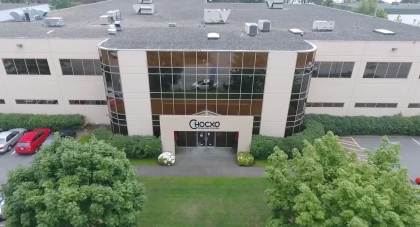 ChocXO expanded its main warehouse facilities in British Columbia by 18,000 square feet.Agthia Group PJSC acquired a 100 percent stake in BMB Group, a healthy snacks and food company. BMB manufactures and distributes a wide variety of chocolate, Mediterranean sweets, bakery ingredients and healthy snacks and food. Launched in 2007, BMB has an extensive portfolio of confectionery and health food brands – including Asateer, Al Qamar, Freakin’ Healthy and Benoit – and distributes over 2,000 SKUs in more than 23 countries worldwide, including the United Arab Emirates, Saudi Arabia and the US.

In brief: Sustainability
CCEP revealed that two of its manufacturing sites have been certified as carbon neutral. The sites at Jordbro in Sweden and Vilas del Turbón in Spain are CCEP’s first carbon neutral sites and are part of a pilot program that aims for at least six CCEP areas to become carbon-neutral-certified the international standard PAS 2060 by the end of 2023. This program is a key part of CCEP’s emission reduction target that focuses first on reducing its value chain emissions before investing in verified carbon offset projects, prioritizing those that remove carbon from the atmosphere to remove any remaining emissions.

W Hydrocolloids, an exporter of ingredient solutions and carrageenan from the Philippines, reaffirmed its commitment to environmental sustainability with a partnership with First Gen Corporation. Almost a year after WHI acquired Philippine Bio-Industries, they inked a deal with the power generation company to supply renewable energy. The deal is expected to enhance the company’s operations and contribute to the firm’s thrust for sustainability and environmental efficiency. This move further aligns WHI’s efforts with the sustainability efforts of its multinational customers overseas. It makes PBI the first carrageenan factory in the Philippines to run on 100 percent clean energy.

Maxum Foods revealed that demand for dairy commodities remains steady as a gradual shift towards eating-out continues, despite the challenges of managing the Delta variant of COVID-19. China’s expanding demand remains absolutely critical to the global market balance. Despite an apparent build in powder inventories, major shifts in internal milk use remain supportive of ingredient imports. There are already tight SMP supplies in the EU and New Zealand and next the US will tighten. The fundamentals are good for SMP with Chinese and SE Asian demand although landed costs are in new territory. US milk is also tightening. New Zealand milk supply remains a lottery, according to the company, as strong farmgate prices will drive as much milk as possible. There is also a shift to a drier seasonal outlook which could crimp peak milk and early shoulder-season output.