You are in : All News > Weekly Roundup: Morrisons signs up to Arla UK 360 program, Ruby chocolate crowdsourced platform created

22 Mar 2019 --- This week in business news, UK retailer Morrisons signed up to Arla UK 360 farm standards program as part of a push to drive successful supply chains. Bühler joined the World Business Council for Sustainable Development, in the hope of making an impact on global corporate sustainability and mobility solutions of the future. Nordzucker is investing €100 million (US$114 million) in Swedish sugar production and a crowdsourced platform for Ruby chocolate has been created, whereby consumers can share and discover brands and artisans showcasing new Ruby applications.

In brief: Sustainability
Arla Foods’ new farming standards program Arla UK 360 is gaining further traction as Morrisons becomes the first retailer to commit to supporting the standards across its entire Arla milk supply. The move means that approximately 200 Arla farmer-owners will be directly sponsored by the supermarket to deliver across the eight farm business areas identified in the 360 program as key to help driving a supply chain that works for everyone. The move also means that Arla owners aligned with Morrisons will transition to the Arla UK 360 standards in the coming months with a target to have reached these by October 2019. 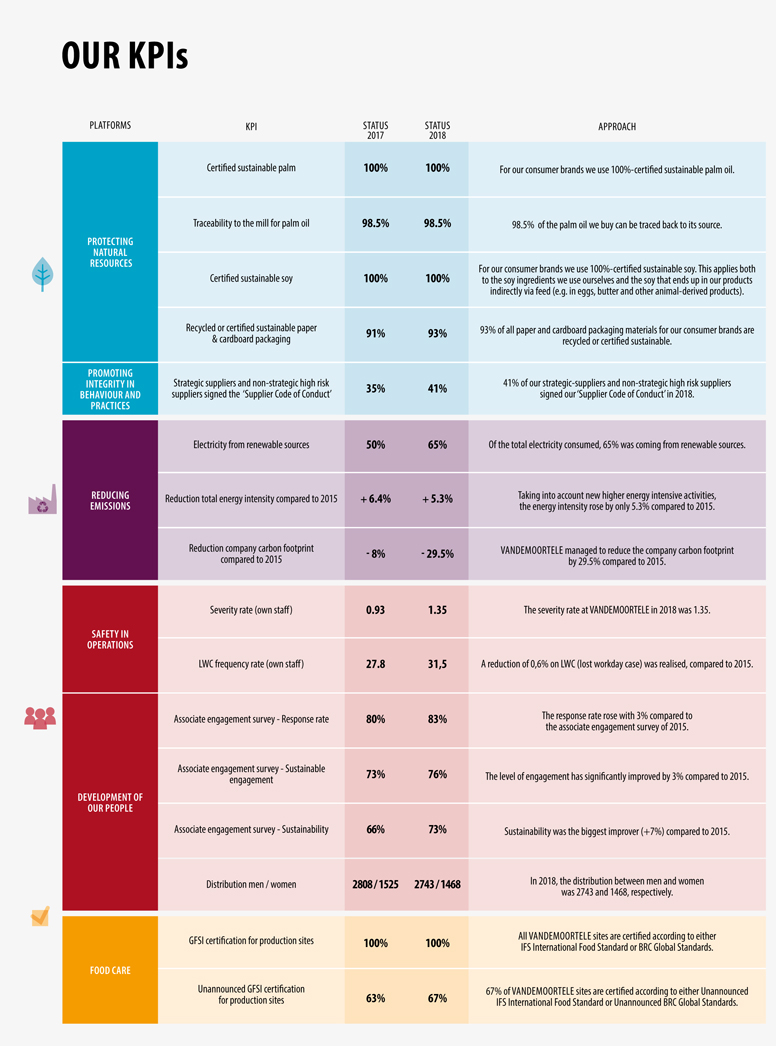 Vandemoortele sustainability KPIs listed in 2018 Sustainability Report.Vandemoortele has released its 2018 Sustainability report. “We see sustainability not as a risk or an obstruction, it is more a responsibility to take and an opportunity to stay ahead. Sustainability is perfectly combinable with taste. Building a tasty future is about shaping a tasty future, responsibly,” the company writes. Since 2015 Vandemoortele is committed to sourcing 100 percent certified sustainable palm oil for the branded consumer products. In 2018, they achieved 98.5 percent traceability back to mill for all the palm oil we buy. They continue to engage with suppliers and Earthworm to work towards transformation in the supply chain. Vandemoortele says “it is our responsibility to supply our customers with eggs that have no connection with negative animal welfare issues.” That’s why the company has committed to using cage-free eggs only from 2019 onwards. For the eggs used in their sauces they even go further and use only free range eggs and this already since 2016. Acknowledging the adverse effects of climate change on human and natural habitats, Vandemoortele is committed to calculating and monitoring greenhouse gas emissions from its manufacturing processes. As energy consumption is a major source of GHG and essential for the production, storage and transport of our products, Vandemoortele subscribes to the general ambitions of limiting these emissions through energy efficiency programs. In 2018, 65 percent of the company’s electricity consumption was delivered from certified renewable sources. Vandemoortele managed to reduce its company carbon footprint by 29.5 percent compared to 2015.

Bühler has joined the World Business Council for Sustainable Development (WBCSD), a global network of almost 200 forward-thinking companies. By connecting with WBCSD, Bühler hopes to make an impact on global corporate sustainability and on providing the growing world population with the nourishment and mobility solutions of the future. “Innovations are key to driving change and these are sparked with broad, inclusive, collaborative networks. We have been joining forces with conscientious market participants to scale innovations for years and the move to join WBCSD’s innovative network is an important step to furthering our sustainable business goals, and most importantly, in developing new means to feed to the world,” Stefan Scheiber, Bühler CEO says.

In brief: investments and business
Nordzucker will invest €100 million (US$114 million) in Swedish sugar production.he investment means that the production in Arlöv is moved to Örtofta and that the factory in Arlöv is subsequently closed. However, before that, a number of significant investments must be in place. These involve both new production methods and new technology and are also an investment in the environment. According to the company, the first steps have already been taken with an extensive modernization of Örtofta's sugarhouse which will be completed before the 2019 campaign. In the years to come, the investments will include building a high rack warehouse, rebuilding the service center and the development of a new liquid and syrup facility. The project is expected to be completed in the autumn of 2021. “We have come far in the planning and I look forward to being ready for the next stage. With the consolidation, we not only ensure a long-term sustainable structure in Sweden, but we also get a modern factory with efficient energy-optimized production and significant savings in the long-term. An important step to position ourselves as a stable, profitable and competitive player in the sugar market,” says Axel Aumüller, Chief Operation Officer for Nordzucker.

Tereos has filed a complaint about malicious allegations against the Public Prosecutor of Paris – Procureur de la République de Paris. According to the company, Tereos wants to send a strong message on the falsehood of these accusations which deliberately aim to harm the reputation and the economic interests of a French group within the context of a severe sugar market crisis in Europe. Over the past 18 months, Tereos says it has publicly provided the necessary explanations, recalling that all its sorbitol deliveries were legal and perfectly controlled. As a matter of proof, facts put forward by the plaintiffs have been in the public domain for more than 15 months and have not been subject to any prosecution. The Public Prosecutor of Saint Quentin has already opened a preliminary inquiry – Procureur de la République de Saint Quentin – and investigations are still ongoing to identify the perpetrators, accomplices and receivers of this destabilization.

Chocolate in 2022: Barry Callebaut reveals that health and sustainability are top-of-mind for purchases

Insights on chocolate themes for the forthcoming year collected by Barry Callebaut have indicated that health and sustainability are key drivers when choosing chocolate,... Read More

The latest “Forever Chocolate” progress report by Barry Callebaut shows the company is working toward its goal to produce completely sustainable chocolate by... Read More