You are in : All News > US polar vortex: Deep cold forces meat and grain plant shutdowns, farmers keep animals safe in arctic conditions 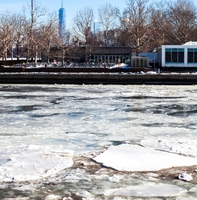 04 Feb 2019 --- The US agriculture sector is thawing out after the US polar vortex impacted parts of the US farm belt, with the deep cold forcing farmers to brave the elements over the past few days to look after livestock and cattle in the dangerous freezing conditions. As arctic weather gripped the Midwest, Cargill temporarily closed all its grain plants and meat processing companies have been taking extra safety precautions so farms and facilities remain operational.

The polar vortex pushed a mass of cold air into much of the Midwest agriculture belt last week which saw Cargill’s grain facilities in Iowa, Illinois, Indiana, Minnesota, Missouri and Wisconsin close for a period. Meat giant Tyson Foods closed six plants in the Upper Midwest over concerns for worker and animal safety. However, the facilities reopened quite quickly and the meat plants’ operations returned to normal as temperatures began to warm.

Smithfield Foods also reported that is was taking necessary precautions to ensure the comfort and safety of its employees and animals during the extreme winter weather that has gripped several states over the last few days.

US corn processor, Archer-Daniels-Midland  (ADM) had reportedly been forced to adjust some of its transportation routes due to the severe weather as well as close some of its grain elevators in the Midwest.

Farmers have been working hard to look after animals, prevent frostbite and keep them dry and warm as temperatures plummeted to around minus-40 Celsius in some areas, making parts of the Midwest colder than the South Pole.

Heavy snowfall, extreme wind chills and historically low temperatures in places has made it difficult for farmers to get around, drive tractors, feed animals and hydrate animals by preventing water from freezing.

In terms of crops, it is too early to fully realize the impact the bitter cold may have had on wheat and soybean for instance but the icy cold has now loosened its grip, farmers will be able to assess any potential damage.

Although temperatures have normalized, the US agriculture sector is bracing itself for the possibility of more arctic-like weather which is expected to come later this week.

This has been one of the worst cold snaps to hit the US Midwest in decades. Ninety million people, which is a third of the US, have seen temperatures drop to -17 Celsius or below and tragically, at least 21 people have died.

Food prices are surging globally, with some countries – like the UK – reporting the highest inflation levels in 30 years. Consumers and small businesses are... Read More

In NPD news, Silk launched a vitamin-rich plant-based drink Nextmilk, while Gardens of Coffee unveiled a subscription service that allows consumers to have premium... Read More