You are in : All News > US dairy industry urges EU not to dump stockpiles in international markets 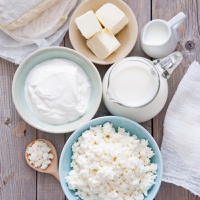 22 Jun 2020 --- US dairy groups are urging the government to prevent the EU from using future intervention practices to dispose of its publicly stockpiled milk products at discounted prices in international markets. The organizations cite new economic analysis outlining the “serious impact” of the EU’s Skim Milk Powder (SMP) Intervention Program on the US dairy industry – particularly to US farm-gate milk prices – for the years 2016 to 2019.

“When we were discussing the EU SMP intervention with US dairy in January 2019 at the IDFA Annual Convention in Orlando, Florida, I sensed a broad consensus that these EU measures had played a crucial role in stabilizing the global SMP and dairy markets – and this is fully recognized by the US paper [by the IDFA],” Alexander Anton, Secretary General of Euromilk, tells FoodIngredientsFirst.

“Back in 2015 the global dairy markets were put under huge stress by the Russian import ban. The supply of dairy produce had to be redirected at global level and prices were in a structural downward spiral all over the globe. With severe market disturbances in all dairy markets over the world. The mitigation effect of the market intervention by the EU Commission was broadly acknowledged at that time and is recognized in the US paper,” Anton notes.

Jim Mulhern, President and CEO of National Milk Producers Federation (NMPF), flags an inflection point. “This report puts into hard numbers the ‘bitter truth’ that US dairy farmers already know: the EU’s dump of intervention stocks onto the world market depressed farm-gate milk prices in the US in 2018 and 2019.”

He argues, “Now, as farmers and cooperatives are working tirelessly amid a global pandemic to keep an essential food ingredient moving to those markets that need it most, it’s time to do the advance work necessary to ensure we don’t see a repeat of those harmful impacts from EU Intervention policy in the future. The EU SMP Intervention Program needs serious reforms and the Administration should examine the best tools at its disposal to help drive that needed change.”

The report authors conclude that the US was “economically harmed by the EU’s Intervention program for SMP” in three ways. Firstly, the EU program depressed the global price of SMP, which lowered US milk prices in 2018 and 2019, contributing to a US$2.2 billion loss of US dairy-farm income those years.

Finally, the analysis shows that when the EU unleashed its stockpile of “Intervention SMP” onto the global marketplace, the disposal of the product had harmful effects on the competitiveness of the US in historically important export markets, including Southeast Asia.

“Dairy markets are among the most volatile and the price volatility is due to extrinsic factors at global level, like weather conditions and trade tensions,” comments Anton at IDFA. “The US paper tries to explain the development of the US dairy markets only on the basis of the 2016 and 2017 EU measures. The paper acknowledges that these measures helped the US dairy in 2016 and 2017. The real issue for the US dairy in 2018 and 2019 was the US trade policy with trade disputes with Mexico and China and their retaliation tariffs on US dairy.”

Click to Enlarge“Publishing papers on each other is not a bad thing as such, but talking to each other may be a better way forward,” concludes Anton at Euromilk.Global dairy outlook
In a letter to US Trade Representative Robert Lighthizer and Agriculture Secretary Sonny Perdue, leading US dairy trade associations –  theIDFA, NMPFand the US Dairy Export Council (USDEC) – point to the new economic analysis to evidence the need for a policy shift.

“As the global dairy market reels from unprecedented disruption, and the consequences of the use of this EU policy to disrupt trade have become much clearer, it’s essential to drive forward reform of this program. Looking ahead, if the EU is allowed to again dump government stockpiles on the world market, it will harm US farmers and processors and erode efforts to advance fair trade policies that create greater market access for US dairy,” underscores Tom Vilsack, President and CEO of USDEC.

According to IDFA data, the EU tripled the annual ceiling of SMP Intervention purchases in 2016 from 109,000 metric tons (MT) at the beginning of that year to 350,000 MT by June 24, 2016. The EU continued its program, accumulating the equivalent of 16 percent of the global market in government storage. As global SMP demand began to improve in 2018, the EU released its stockpile of SMP onto the commercial market. During the 18-month period from January 2018 to June 2019, the EU sold, via a tendering process, 379,453 MT of Intervention product, depressing global prices for SMP below what they otherwise would have been. The EU government implemented no restrictions to prevent the product from entering the global market.

“The SMP Intervention product entered export channels since the domestic market was not capable of handling this volume without an adverse impact on the domestic price of SMP, and hence the farm-gate milk price. Instead, the negative impacts were felt by others, including US farmers and exporters, in 2018 and 2019,” the IDFA reports.

Driven by greater global dairy demand, US dairy exports have nearly tripled since the early 2000s, and the US is now the world’s third-largest dairy product exporter behind New Zealand and the EU. This report concurs that the US and other exporters are harmed when publicly stockpiled product accumulates and is disposed of on the global market.

“Publishing papers on each other is not a bad thing as such, but talking to each other may be a better way forward,” concludes Anton, speaking to FoodIngredientsFirst. “The US and the European lactosphere are the world dairy leaders – let’s use this strong global leadership position to join forces to face the challenges ahead.”

20 Jul 2021 --- Laïta Nutrition is increasing its focus on plant-based ingredients, with the nutrition division of the Laïta dairy cooperative acknowledging that eating... Read More

19 Jul 2021 --- Butter Buds, a business specializing in dairy and non-dairy concentrates, has developed an oil-based solution that allows manufacturers to replace block butter in... Read More

15 Jul 2021 --- Consumers are seeking more diversity, indulgence and nutrition from food and beverages. In line with this, Kerry believes there is further opportunity to use plant... Read More