You are in : All News > Tyson Foods snaps up McDonald’s chicken nugget maker Keystone in US$2.16bn deal 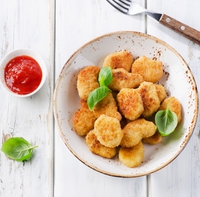 21 Aug 2018 --- Maker of McDonald’s Chicken McNuggets and major meat supplier to US fast-food chain restaurants, Keystone Foods, is being sold to Tyson Foods Inc. by Brazil's Marfrig Global Foods. The US$2.16 billion deal expands Tyson Foods’ value-added protein capabilities by serving major foodservice customers while strengthening its presence around the world and expanding its international reach.

Tyson CEO Tom Hayes has allayed concerns over “concentrated” suppliers as the deal means that some key customers now have even fewer suppliers of meat. However, during a conference call with analysts yesterday (August 20), Hayes said that customers who used to buy from both Tyson and Keystone will now be dealing with one combined company, but Tyson has a greater number of plants because of the acquisition. The specifics in terms of overlap there remains unclear.

“Keystone is a leading global protein company and will be a great addition to Tyson Foods,” says Hayes. “This acquisition will expand our international presence and value-added production capabilities and help us deliver more value to our foodservice customers.”

“Keystone provides a significant foundation for international growth with its in-country operations, sales and distribution network in high growth markets in the Asia Pacific region as well as exports to key markets in Europe, the Middle East and Africa.”

“We look forward to serving customers with these additional capabilities and to welcoming Keystone’s dedicated team members to the Tyson Foods family.”

Tyson’s string of deals
The acquisition of Keystone is Tyson Foods’ latest investment as part of its continuing growth strategy and expansion of its value-added protein capabilities. The company has also been sharpening its focus on protein.

Last week Tyson Foods reached an agreement to sell its pizza crust business, TNT Crust business (TNT), to an affiliate of private equity firm Peak Rock Capital (Peak Rock). Terms have not been disclosed, but the two companies hope to complete the deal by September.

Tyson also sold its Sara Lee Frozen Bakery and Van’s businesses to private equity firm Kohlberg & Company in a deal which includes the Chef Pierre, Bistro Collection and Van’s brands, and a license to use the Sara Lee brand in specific channels. In addition, the deal also includes the sale of the company’s Tarboro, North Carolina and Traverse City, Michigan prepared foods facilities and a sales office in Canada.

At the same time, Tyson also celebrated becoming “one of America’s leading producers of organic branded chicken” through its acquisition of Tecumseh Poultry LLC, which also includes the air-chilled Smart Chicken brand. Tecumseh Poultry produces air-chilled, fresh chicken, as well as deli-style chicken and a variety of chicken sausages. The air-chilling process involves using cold air to cool chicken during processing, while the most common method used by the US chicken industry is water-chilling.

This follows an announcement late last year when the company said it plans to build a new chicken production complex in Tennessee in a US$300 million project designed to keep pace with the region’s growing demand for chicken. The new plant will produce pre-packaged trays of fresh chicken for retail grocery stores nationwide and is expected to process 1.25 million birds per week, increasing Tyson Foods’ overall production capacity by the same amount.

Tyson has also invested in Beyond Meat and Memphis Meats, companies developing plant-based meat substitutes and cultured clean meat. Hayes said that “it might seem counterintuitive,” but that the investments are part of an effort to meet future consumer demand in a sustainable way.

Keystone, which employs approximately 11,000 people, generated annual revenue of US$2.5 billion and Adjusted EBITDA of US$211 million in the last 12 months ending June 30, 2018. During the same period, the company generated approximately 65 percent of its revenue from US-based production and the remaining 35 percent from its Asia Pacific plants.

Tyson Foods – which posted sales of US$38.26 billion in its fiscal year 2017, ending September 30, 2017 – expects the acquisition to be accretive to GAAP EPS in the third year and accretive to adjusted EPS in the first year excluding transaction-related costs as well as the incremental depreciation and amortization associated with the transaction.

The company behind brands including Jimmy Dean, Hillshire Farm and Ball Park Franks, also expects to generate annual synergies of approximately US$50 million by the third year of the acquisition, driven by operational efficiencies, procurement savings, distribution & supply network optimization and other opportunities.

The acquisition will be funded through a combination of existing liquidity and proceeds from the issuance of new debt. Initial leverage metrics are expected to be well within levels appropriate for the company’s existing investment-grade credit ratings. The company says that it plans to use its cash flows to pay down debt to continue to support its credit ratings and to strengthen its balance sheet.

Approved by the board of directors, the transaction is expected to close in mid-fiscal 2019, subject to customary closing conditions, including regulatory approvals.