You are in : All News > Senegal fish processors rally against fish industry pollution to safeguard health and traditional economy

26 Sep 2022 --- Legal proceedings against a local fishmeal factory have been undertaken by a group of artisanal fishers, fish processors and inhabitants of Cayar, Senegal, blaming the factory for polluting the town’s air and drinking water source.

The disruptions caused the previous property owners to “flee,” according to the suing parties. Protestors from the community have pledged to shut down the plant regardless of the new owners.

“Environmental litigation like this hardly happens in Senegal or most of Africa. So this will be a historic test for our institutions and citizens’ freedom to exercise their rights,” says Maitre Bathily, a lawyer for the collective.

“But we believe they will prove strong. The factory has repeatedly broken environmental codes, and the environmental impact assessment conducted before it opened clearly had enormous flaws. It should be an open and shut case,” he continues.

Fish meal is dried fish used as fertilizer and animal feed, by not using it for human consumption directly contributes to drive-up food prices in the region. The exported feed goes to European and Asian markets for animal consumption. 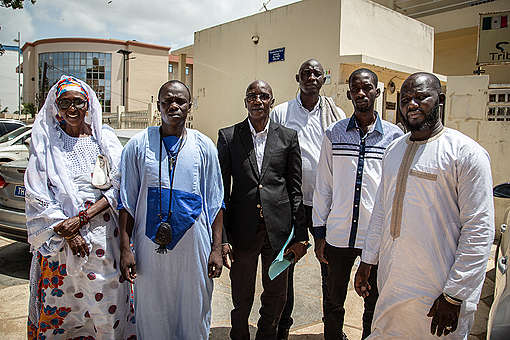 Members from the collective say that the Spanish owners of the factory have sold their shares to the local management team after a “sustained campaign” by the grassroots group.Pollution accusations
Greenpeace Africa is demanding that West African governments phase out fishmeal and fish oil production due to “its negative environmental, social and economic impacts.”

The NGO also calls for the authorities to grant women fish processors and artisanal fishermen a legal and formal status that would open the profession to labor rights and benefits.

Furthermore, the suing parties also launch accusations that these kinds of factories aid unemployment as they employ small groups of people.

“They pollute the land and drinking water and destroy the sea. Our town is filled with the terrible noxious smell of rotting fish. Our children’s health and ability to make a living are at stake. That’s why we will never give up,” says Maty Ndao, a fish processor from Cayar and member of the Taxawu Cayar Collective.

“They force us to live with a foul smell in the air and dump waste into the lake that supplies our drinking water,” adds Mor Mbengue, a local fisherman.

According to a Greenpeace Africa report, overfishing is causing a “catastrophic impact” on the 825,000 Senegalese that derive their income from fishing.

Fleeing factory owners
Members from the collective say that the Spanish owners of the factory have sold their shares to the local management team after a “sustained campaign” by the grassroots group.

“It seems the factory’s owners need time to come up with their excuses. But we’re ready, and our photos and scientific evidence will expose their law-breaking,” highlights Ndao.

“The fact that the old owners are running away after we protested against them has made us even more certain about our struggle.”