You are in : All News > Nabati Foods introduces plant-based liquid eggs in Canada 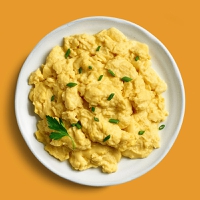 24 Aug 2021 --- Nabati Foods, a plant-based food tech company, is launching its plant-based liquid egg product in Canada. Nabati Plant Eggz is poised to disrupt the retail shelves and promises to rival the consistency, taste, and texture as a traditional chicken egg.

Nabati Plant Eggz is made using lupin and pea protein. Each serving has just 100 calories, with six grams of protein, two grams of fiber and no cholesterol.

They are also high in vitamin A, vitamin E, riboflavin, niacin, vitamin b12 and pantothenic acid. The product will be sold in liquid form in 355ml bottles.

“We are excited to be the first Canadian company to launch a plant-based liquid egg product that offers the same consistency, taste and texture as a traditional chicken egg. Nabati Plant Eggz can be cooked like traditional chicken eggs in dishes such as omelets, quiches, and scrambled eggs,” says Nabati Foods CEO Ahmad Yehya.

“Unlike other plant-based eggs on the market, Nabati Plant Eggz is soy-free and gluten-free. We are committed to creating healthy, plant-based alternatives that everyone can enjoy,” he notes.

The plant-based food player has constructed a new manufacturing facility in Alberta. The plant is five times larger than the pilot facility and comes following the completion of the company’s oversubscribed financing of US$7.7 million.

Growth in demand for plant-based egg
Nabati Plant Eggz is available at Nabati.ca and soon at Sobeys in Quebec and Whole Foods across British Columbia and Ontario.

“We created Nabati Plant Eggz because we weren’t satisfied with the options that we could find on the market,” adds Yehya. “Now that we’ve added our Eggz to Nabati Foods’ plant-based lineup, I believe we are giving breakfast back to so many people who want to enjoy these traditional recipes, but without consuming animal-based products or products with allergens.”

Nabati Foods Global has filed new patents for its plant-based egg product, Nabati Plant Eggz. These have been registered in Canada, the US and Australia. The company... Read More