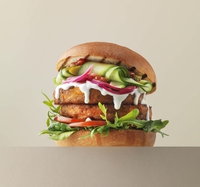 29 May 2019 --- High-end UK grocer Waitrose & Partners has launched the first seitan based burger for the British market. The Seitan Pattie is a mix of seitan – a protein-rich food made from wheat gluten – and mushrooms, combined to give an intense smoky flavor. Suitable for barbecuing or being cooked in the oven, the product offers a solution for a complete vegan feast, according to the company and comes as summer and the barbecue season approaches.

The UK retailer says that the demand for vegan dishes continues to rise and searches on supermarket’s website – Waitrose.com –  for vegan burgers has increased by 86 percent, with seitan searches up by 148 percent. There has also been a growing trend for vegan barbecue products with searches up by 175 percent compared to last year.

Plant-based growth has been a key theme for several years, but the extent to which it grew into the total mainstream with both vegetarian and vegan options became incredibly clear throughout 2018. According to data from Innova Market Insights, there has been more than 45 percent average annual growth in food & beverage launches with a vegan positioning (CAGR, 2013-2017). Meat substitutes accounted for 14 percent of global meat launches in the first nine months of 2018, up from six percent in 2013.

“We are launching the first seitan burger. The modern barbecue is an inclusive affair with delicious products catering to all tastes and demands and we are able to offer a good selection of vegan options,” says Simona Cohen-Vida, Waitrose & Partners Vegetarian & Vegan Product Developer.

In addition, a new, Korean style vegetable burger is also available, inspired by the trend for lightly pickled vegetables and full of vibrant, punchy Korean flavors. The meaty textures come from the soy and there’s a kick of chili heat on the finish.

Tapping into the summer mood, the company offers more dishes inspired by traditional recipes from warmer climes including a vegan Tandoori Kofta Kebab made with chickpeas, coriander and red onion. Enjoyed with flatbreads, salads and your favorite spicy sauces.

In response to growing demand from shoppers looking to eat vegan and vegetarian meals, Waitrose increased its vegan offering by 233 percent in 2018. Waitrose & Partners reports that its vegan party food range is proving popular with customers with sales up by 20 percent since the initial launch last October. But the trend goes far beyond vegans alone. Twenty-one percent of people now identify as “flexitarian” (i.e., flexible vegetarian), according to research by Waitrose & Partners in the 2018’s annual Food & Drink Report.

A 2018 Innova Market Insights consumer survey found that one in five US consumers “have eaten less meat across the past year.” The broadening interest in plant-based diets has also resulted in meat alternatives moving beyond their original vegetarian and vegan domain. Their positioning encompasses a much broader base of flexitarians, as NPD focuses on improving quality to replicate real meat.