You are in : All News > Hydroponic tomatoes emerge from “negative light” with Friend of the Earth sustainability certification

07 May 2020 --- Hydroponically grown H2Orto tomatoes from the Italy-based FRI-EL Green House farm have become the latest product to receive Friend of the Earth sustainability certification. The tomatoes are grown in high-tech greenhouses which allows the company to now display the Friend of the Earth logo on its products. Paolo Bray, Director of Friends of the Earth, tells FoodIngredientsFirst how this certification sizes up to traditional organic production as consumers increasingly prioritize holistic sustainability.

“A third-party sustainability certification is fundamental for H2Orto. The current organic certification, at least in Europe, does not allow for assessment of agricultural production carried out ‘outside the soil’, so this certification would not currently be an option for the company. Additionally, the concept of sustainability brought forward by Friend of the Earth better represents H2Orto’s tangible results in reducing its environmental impact. This is not only in terms of the use of pesticides and herbicides, but also on energy, water, land-use and waste generation per unit of production,” says Bray.

Friends of the Earth is a global certification standard for products and companies that adhere to sustainable practices. Over 50 products have been certified in Europe, Africa, Asia and the Americas. They include coffee, quinoa, rice, fruit, milk and dairy products, parmesan, oil, coconut, fruits, wine, eggs, chicken and meat.

“Consumers are currently more interested in sustainable products than organic as it better applies to their current lifestyle motivations. The Friends of the Earth claim and logo are very consumer-friendly and the fact that they are potentially applicable to all agricultural products will, in turn, generate more visibility and a more coherent message,” states Bray.

According to Innova Market Insights data, 38 percent of Indian, German and UK consumers want to know what impact the food and beverage products they buy have on the planet. The majority of these respondents indicated that this information makes them feel more connected to the brand.

This ecological demand has translated into FMCG brands increasingly acknowledging the environmental attributes of packaging as a key selling proposition of consumer packaged goods, as highlighted by PackagingInsights. Meanwhile, ingredient provenance has always been important, but now consumer interest in discovering the story behind their foods has risen further and is increasingly influencing purchasing decisions, according to Innova Market Insights. 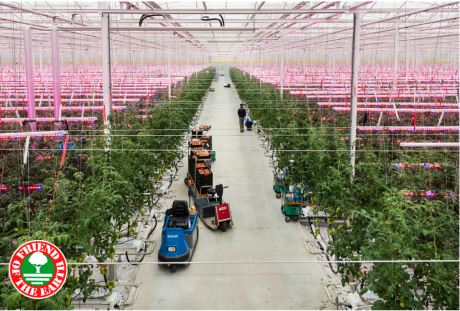 The hydroponic system saves 70 percent of the surface and water, and the production model is able to exploit the circular economy.Bolstering the environment
H2Orto tomatoes were developed when FRI-EL, one of the main Italian producers of energy from renewable sources, was searching for a way to avoid dispersing the heat generated by its biogas plants. Through FRI-EL Green House, it has invested in the construction of hyper-technological greenhouses for the production of tomatoes in the Ostellato area. They are heated with the hot water produced by the adjacent biogas plant. This is powered by by-products of agricultural origin, which, at the end of their use, they are transformed into fertilizers.

According to Alessio Orlandi, Commercial Director of FRI-EL Green House, the system saves 70 percent of the surface and water, and the production model is able to exploit the circular economy.

“We have thus created a system that allows us to make the sites productive 365 days a year. We are currently equipped with 12 hectares of greenhouses and 220 km of LED lights that allow winter production. In this way, we recover precious energy and simultaneously create a virtuous cycle that is good for the environment and for our tomatoes,” he adds.

According to Friends of the Earth, hydroponic production benefits both the environment and the healthiness of the tomato purchased by the end consumer. Bray notes that traditionally, tomato production is strongly influenced by environmental and weather changes and this consequently can create a major waste of production and use of pesticides.

In terms of the environment, the production model allows much less land to be used than traditional crops in the field. One hectare  of hydroponic greenhouse produces the same quantity of vegetables that would be obtained in about 10 hectares of traditional crops. Unlike in a traditional “open” field, hydroponic production also includes irrigation systems that ensure the right amount of water for the plants. The systems also recover rainwater, avoiding waste as much as possible.

“Hydroponics production has unfortunately been put under a negative light in the past because of the spread of the wrong information. It is time that consumers understand that this can represent a much more environmentally and possibly socially friendly production for the reasons explained. This is why a reliable and science based-certification like Friends of the Earth can help H2Orto to provide further reassurance and information to its customers and to the public in general,” concludes Bray.

In other high-tech tomato news, crops were gene-edited by Spring Harbor Laboratory earlier this year to create “urban agriculture tomatoes,” which could be a game-changer for growing in limited spaces. These new plants have bunched, compact fruit and resemble a bouquet whose roses have been replaced by ripe cherry tomatoes.