You are in : All News > High-rise pig farms put China’s insatiable pork demand in conflict with climate and animal activism

25 Jan 2023 --- The world’s largest single-building pig farm has been constructed in China’s Hubei province in a move that critics warn could result in the next global pandemic and undermine climate change policy, animal welfare and workers’ rights. The facility reportedly has the capacity to slaughter around 1.2 million pigs annually.

The Chinese government released a policy statement in 2019 permitting the construction of high-rise breeding facilities as the country grapples with a dwindling supply of pork – its most popular source of animal protein.

The policy was welcomed by investors, including cement manufacturer Zhongxin Kaiwei, which has made its debut in animal farming with the 26-story, ¥4 billion (US$590 million) Hubei facility.

The facility uses “intelligent” farming techniques, such as automatic feeding from a central control and a process that converts waste from pigs into biogas.

“Compared with traditional breeding methods, high-rise pig farms are more intelligent, with a high level of automation and biosafety and the advantage of saving land resources,” says Zhu Zengyong, a professor at the Institute of Animal Science of the Chinese Academy of Agricultural Sciences.

However, environmental campaigners suggest these intensive farming methods will have the opposite effect, increasing the likelihood of disease outbreaks while supporting the consumption of animal protein, which has been linked to climate change.

“Such intensive agriculture is environmentally destructive, both locally and globally, and keeping animals in these crowded, filthy conditions provides the perfect breeding ground for deadly diseases – meaning this farm could well be the source of the next global pandemic,” Mimi Bekhechi, People for the Ethical Treatment of Animals (PETA) vice president for Europe, UK and Australia, tells FoodIngredientFirst.

Disease prevention or disaster?
According to the American Society for Microbiology, it is estimated that around 225 million pigs in China died or were culled after the outbreak of African Swine Fever in 2018. Zengyong suggests that the growing popularity of high-rise animal farms is partly driven by the need for more effective disease control.Crowded conditions inside the high-rise pig farm in Ezhou (Image credit: Handout).

However, other academics argue that large-scale intensive farming only increases the probability and severity of disease outbreaks.

“The higher the density of animals, the higher the risk of infectious pathogen spread and amplification, as well as the potential for mutation,” says Dirk Pfeiffer, chair professor at One Health at City University of Hong Kong.

Matthew Hayek, an assistant professor in environmental studies at New York University, adds: “Intensive facilities can reduce interactions between domesticated and wild animals and their diseases, but if a disease does get inside, they can break out between animals like wildfire.”

The Hubei facility is reportedly equipped with temperature, gas and ventilation control, but sustainability initiative The Plant Based Treaty says that the ventilation in high-rise farms will always remain less effective compared to outdoor farms.

“Congestion in high-rise breeding facilities for pigs, where each floor would have over 1,000 pigs, creates conditions for the spread of zoonotic diseases. Look at the COVID spread in high-rise buildings – you can expect to see more outbreaks in such concentrated facilities,” Anita Krajnc, global campaign coordinator at The Plant Based Treaty, tells us.

Fuel on the climate change fire
Another area of dispute around the proliferation of high-rise animal farms is the government-backed decision to upscale meat production at a time of rising climate change fears. Science has increasingly linked the meat and dairy industries to unsustainable levels of greenhouse gas (GHG) emissions.Chinese authorities dipped into national meat reserves last year as pork prices surged.

A recent study by Oxford University, which examined the impacts of 57,000 food products in the UK and Ireland, found that plant-based meat alternatives produce around one-fifth to one-tenth of the environmental impact of animal-based products.

In 2021, China announced plans to reach carbon neutrality before 2060 and peak CO2 emissions before 2030. According to the European Parliament, the world’s most populous country was responsible for more than a quarter of global GHG emissions in 2019.

Meanwhile, Chinese reports indicate that the country’s southern province of Guangdong has already built more than 170 multi-story pig farms, while there are 64 similar facilities in planning or under construction in the Sichuan province alone.

With the recent news that China’s population is now in decline for the first time in decades, The Plant Based Treaty sees even less reason to construct multi-story pig farms, instead calling for a cultural shift to plant-based pork products.

“OmniFoods has created plant-based products for the Asian market. Its pork products made in Hong Kong, for example, are mainly non-GMO soy protein, gluten-free, low in fat and rich in vitamins,” says Krajnc.

“The question is how can we promote OmniFoods in Asian communities for the benefit of climate and animal protection, public health and workers’ rights?”

Sentient creatures intensively farmed
Beyond disease and climate concerns, animal activists have called into question whether it can ever be ethical to intensively farm sentient creatures like pigs. According to Compassion in World Farming, pigs feel pain and fear and isolation causes them stress. They can also learn from each other, show empathy and enjoy brain-teaser games. 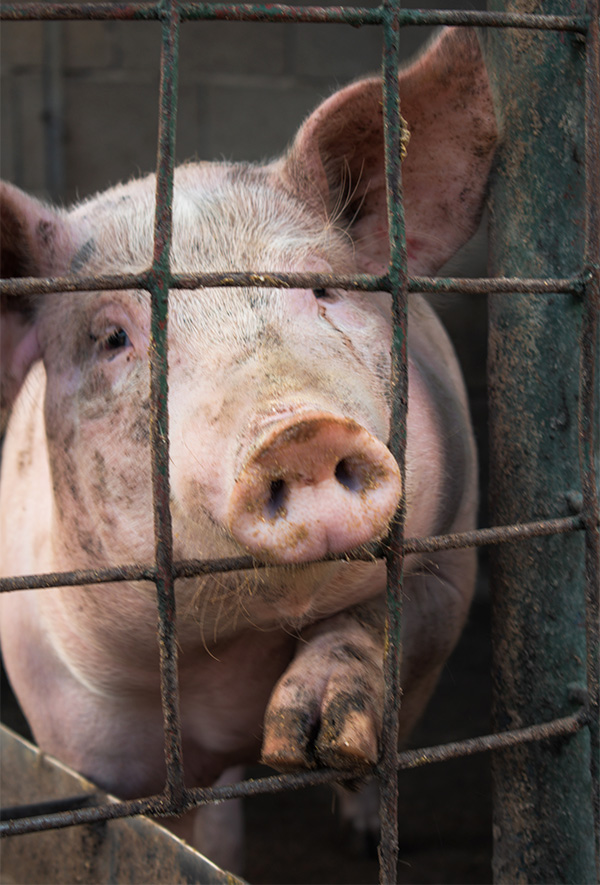 According to The Humane Society, studies have found that pigs are more intelligent than dogs and 3-year-old children.“This sky-high farm is a new low for China. Up to 650,000 curious, sensitive pigs are set to be crammed into the building and deprived of everything that’s natural and important to them,” says Bekhechi.

“This mega pig prison – just like the consumption by humans of other animals’ flesh – is out of touch with our understanding of who animals are and hugely damaging to the planet and human health. It should be shut down immediately.”

In October, we investigated a similar development involving Spanish seafood multinational Nueva Pescanova, which plans to build the world’s first industrial-scale octopus farm in Gran Canaria, Spain, this year. The plans have been met with fierce resistance by environmental groups and scientists.

Leaving a bad smell
PETA has made us aware of a previous job applicant at the Hubei high-rise pig farm, who claimed that Ozone disinfection systems are being used to clean the facility with pigs and workers present. The applicant shared an image of the inside of his face mask spotted with his blood and footage of a pig apparently distressed by the disinfectant.

Chinese reports suggest that workers are required to undergo multiple disinfection rounds before entering the farm and that they aren’t able to leave the facility until their next break, which is once per week.

A local farmer, who is concerned about odor from the facility spreading to his nearby farm, told the Guardian: “I’ve heard pigs raised in these [high-rise] farms can be ready for sale in a few months – back in the day, it would take us about a year to raise one. But I think as technology advances, this will be the trend in the future.”

Zengyong agrees, arguing that it is “inevitable the pig farming industry is heading toward a highly automatic and intelligent future.”