You are in : All News > Global export success: UK food and drink sales reach record high, but Brexit looms large 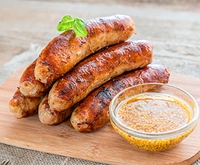 13 Aug 2018 --- UK food and drink exports hit a record level of £10.6 billion (US$13.5 billion) for the first half of 2018 – up by 4 percent compared to last year, as the date for Britain's exit from the EU draws ever closer. The US, China and Hong Kong were among the top countries importing British products, according to new figures from the Department for Environment, Food & Rural Affairs, illustrating how the country's manufacturers may be able to look further beyond prioritizing their EU trading strategy in the future. Demonstrating a clear global desire for British taste, quality and high standards, UK food and drink businesses are now selling their products to over 200 global markets.

UK seasonal favorites are also in demand abroad – in the first half of the year 64 million liters of ice cream and over 500 tons of strawberries were shipped to foreign shores.

Traditional barbeque produce, such as sausages and cuts of beef have risen by 48 percent and 17 percent respectively. This is due in part to new meat export markets opening in recent years – and will be bolstered further in the future by the recent announcement that China will lift their BSE ban on British beef, which is estimated to generate £250 million (US$318.4 million) in the first five years alone. Taiwan will also soon be importing UK pork for the first time – worth an estimated £50 million (US$63.7 million) over five years to the UK’s industry.

Iconic British produce such as whiskey, beer and smoked salmon are also being snapped up from international supermarket shelves.

Food Minister, George Eustice says: “Consumers across the globe know British produce is delicious. They also know it is high in quality and backed by high standards of animal welfare. This is why we are continuing to see a huge growth in the worldwide demand for the best of what British farmers and food producers have to offer.”

“This world-leading industry already boosts our economy by over £110 billion each year, and leaving the EU will give our food and drink producers an unparalleled opportunity to tap into more markets and take advantage of the UK’s position as a global nation,” Eustice notes.

A team of the Government’s leading trade experts are on hand to guide UK businesses as they enter into overseas markets for the first time or consider expanding their current global customer base. This is complemented by the government’s Food is GREAT campaign, which highlights the success of current exporters and showcases the UK’s top quality food and drink.

One ice cream company who has benefited from this government guidance is Somerset-based firm Granny Gothards, whose range of over 125 flavors includes British inspired tastes such as clotted cream, blackberry and apple, and whiskey and marmalade. Established in 2012, the business now exports to Bahrain, Abu Dhabi, and Dubai and has recently branched out into China.

Founder of the Department for Environment, Food & Rural Affairs, Amanda Stansfield, also comments: “After the success of our ice creams in Dubai, it seems an ideal time to now establish our brand in China. Seeking expert advice is key for any business looking to export produce to China.”

“The support from government trade advisers has been vital in navigating this process. Sheffield-based ice cream makers Yee Kwan have also been successful at branching out into exporting. Inspired by the tastes of East Asia – with popular flavors including black sesame seed, matcha green tea and chocolate miso – the company exports to ten European countries via their supply with Wagamama, as well as Kuwait. They will soon be working with a Chinese distributor, with orders expected next year,” she says.

Founder Yee Kwan notes: “After we’d realized the potential to sell our products overseas, we began working with government advisers, who supported us in exhibiting at the International Food & Drink Event in London.”

“We’ve found that there’s loads of support to help us navigate exporting challenges – if we can do it, so can you,” Kwan adds.

Brexit concerns remain
The news comes as concern grows among producers around the potential for a no-deal Brexit and the jury is out on whether these types of strong export statistics can be upheld when such uncertainty exists about potential tariffs when exporting to the EU bloc in a post-Brexit environment. In fact, just last week, the National Farmers Union (NFU) warned the UK would run out of food if it were only fed with British food.

New figures from the Department for Environment Food and Rural Affairs (Defra) for 2017 has shown that the UK produced 60 percent of its own food in 2017. With the UK's exit from the EU looming, negotiations over the divorce proceedings are making slow progress, and a new focus has been placed on British farming.

NFU President Minette Batters warned the UK’s farming sector would be hit by a “bad Brexit” and called for Prime Minister Theresa May to strike a trade deal with the EU to thrive. Defra’s most recent figures show that in 2017 Britain produced 60 percent of its food and this rate is in long-term decline, down every year since 1987, the first time such statistics were published, when almost three-quarters of all food consumed – 74 percent – was produced domestically.

Batters has also stressed that the recent dry and hot weather in the UK could impact farming conditions. “British food production has been pulled into sharp focus in recent weeks with farmers across the country wrangling with the impacts of unprecedented weather.”