You are in : All News > Food waste (Part 1): EU steps up the fight with “landmark” laws, while suppliers work towards a circular economy

Food waste (Part 1): EU steps up the fight with “landmark” laws, while suppliers work towards a circular economy 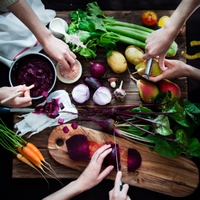 08 May 2018 --- Food waste is an environmental, economic and ethical problem of global proportions. With large regions of the world still suffering from food shortage, and a growing global population, there is an urgent need for more effective food production, transportation and consumption. Economically, businesses are suffering substantially from loss of yield and wasted energy, while food left to rot is known to release methane into the atmosphere, a gas estimated to be 25 times more potent than carbon dioxide.

There are many factors to take into consideration when thinking about how to deal with food waste. Consumer behavior is chief among them; How much food is dumped by consumers (the largest component), waste along the entire food chain, how strict safety policies and over-ordering can lead to waste, what procedures foodservice sectors follow that lead to waste, how farmers struggle to sell blemished and so-called “ugly” produce to retailers conscious of shoppers’ reaction to it. Also, there are the influences of food packaging to consider and while the packaging is not the whole answer to the complicated and globally interconnected issue of food waste, it can be considered a big part of the solution.

Globally the food waste issue has been in the spotlight for the last few years, gaining momentum as one of the key concerns of modern society.

Recently, the European Union has taken a vital step forward in combating the food waste crisis with Parliament setting ambitious reduction targets, while politicians support a series of measures concerning the treatment of waste in general (food waste, recycling and landfill) in a bid to moving towards a circular economy.

Improving waste management will not only benefit the environment, climate, and human health, but the four pieces of legislation which were adopted last month, are also part of a shift in EU policy towards a circular economy –  a system where the value of products, materials and resources is maintained in the economy for as long as possible.

This represents a significant shift and one that is in line with Innova Market Insights number four trend for 2018 - “Going Full Circle.” The notion of a circular economy is starting to take hold in the food industry as consumers increasingly expect companies and brands to be resource smart. From tip to tail eating through to innovative ways to put food waste to good use, as well as more biodegradable and renewable packaging, “circular consumption” is really gaining traction.

By 2025, at least 55 percent of municipal waste (from households and businesses) should be recycled, says the European text, as agreed with Council of Ministers. The target will rise to 60 percent by 2030 and 65 percent by 2035. 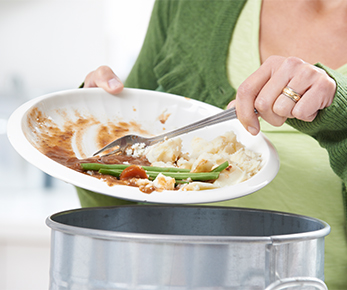 Click to EnlargeSixty-five percent of packaging materials will have to be recycled by 2025 and 70 percent by 2030. Separate targets are set for specific packaging materials, such as paper and cardboard, plastics, glass, metal and wood.

The draft law also limits the share of municipal waste being landfilled to a maximum of 10 percent by 2035. Austria, Belgium, Denmark, Germany, the Netherlands and Sweden sent virtually no municipal waste to landfill in 2014, while Cyprus, Croatia, Greece, Latvia and Malta still landfill more than three-quarters of their municipal waste.

And regarding food waste, member states should aim to reduce food waste by 30 percent by 2025 and 50 percent by 2030. This is in line with the UN sustainable development goals.

According to the EU, to prevent food waste, countries should provide incentives for the collection of unsold food products and their safe redistribution, while consumer understanding of the meaning of “use by” and “best before” label dates should also be improved, say MEPs.

Another significant step forward is the fact that from 2020 onwards member states will have to report their food waste every year. It’s now clear that a serious lack of accurate data has scuppered efforts to truly understand the magnitude of the global food waste (and other waste) crisis, in Europe and the US. And if the shocking numbers aren’t publicly known, finding real long-term solutions to this problem becomes much harder.

What are suppliers up to with regards to food waste?

There are so many companies working hard on their Corporate Social Responsibility (CSR), with sustainability, traceability and transparency key themes for all involved from corporations to SMEs. And part of this involves tackling waste.

Here are just a few examples from a supplier point of view.

Arla Food Ingredients
Back in 2015, developed a protein solution that enables manufacturers to make delicious high-protein low-fat dips using the acid whey they have left over after making Greek yogurt. For every 100 kg of milk used to make Greek yogurt, only 33 kg ends up used in the final product. The remaining two-thirds is acid whey, a by-product that producers often dispose of in their waste stream. Arla knew that acid whey could be a burden for manufacturers of Greek yogurt products.

The company says that by adding its unique Nutrilac whey protein to a mixture of acid whey, water and cream, dairy companies can create a high-quality dip that is typically only 6 percent fat and contains 4 percent protein. By using their acid whey rather than disposing of it, dairy companies will enhance their environmental credentials and convert what would otherwise be a waste stream into a high-value product that will generate incremental sales.

In recent years Arla’s work on tackling food waste has become more apparent. Just a few months ago the company and the European Federation of Food Banks (FEBA) signed an agreement to donate surplus products through the FEBA network partners in Europe, building on the partnerships already in place between Arla and local food bank FEBA members such as Fareshare in the UK, Fødevarebanken in Denmark and the Dutch food bank. 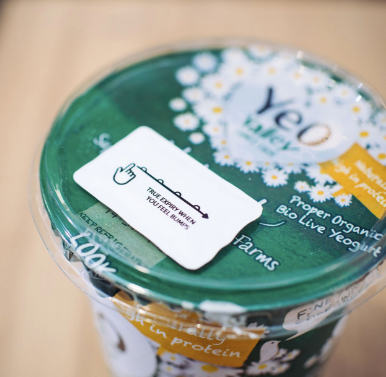 Click to EnlargeIn partnering with the FEBA, a non-profit network organization which brings together 326 food banks in 23 countries throughout Europe, Arla intends to further increase its provision of food supplies to help support those in need. The move will also help Arla to achieve its goal to reduce food waste by half by 2020.

The Danish milk, cheese and cream giant are also set to trial launch the new high-tech food label that turns “bumpy” when food has expired on its dairy products.

The innovation, developed by a start-up company, Mimica, is capable of reducing food waste as labels deteriorate at the same rate as the packaged product, providing consumers with an accurate indication as to whether food is edible, or ready for the bin.

Solveiga Pakštaitė, Founder, and Director of Mimica tells FoodIngredientsFirst how the “bumpy” label can help.

“At the moment, supermarkets use ‘worst-case scenario’ dates because they are not able to track exactly what temperatures food travels at in the supply chain and, on some occasions, accidents happen and food is kept at a higher temperature than required.”

“Typically, the worst case scenario never comes, and so with the Mimica Touch, we would allow supermarkets to display the longer ‘expected date’ because if something does go wrong, then the label will turn bumpy and the product can be pulled off the shelf. By bringing in a biologically-accurate indicator, more often than not it will prove that our food lasts a lot longer than we think it does, and this has the potential to reduce enormous amounts of food waste.”

Firmenich
Last year Firmenich worked with the World Business Council for Sustainable Development (WBCSD) and the EAT Foundation to help launch FReSH, the Food Reform for Sustainability and Health program, which reinforces the company’s commitment to accelerate change in global food systems.

FReSH is designed to catalyze a shift towards a healthier and more sustainable food model and brings together 25 companies from the private sector that have the potential to enact transformational change in food systems all over the world. The program focuses work streams which include improving food sourcing and reducing food loss and waste.

The Swiss flavor and fragrance business also does a lot of sustainability work concerning the citrus it uses; one key part is sharing its expertise with smaller suppliers. According to Firmenich, many smaller citrus juice producers do not have an efficient process, or indeed any process, to separate citrus oils during juice production.

Part 2 of this special report will be published later this week.