You are in : All News > Farming insects could be key to sustainable food production, but upscaling issues linger, say Swedish scientists

17 Jan 2019 --- Although insects such as whole-roasted crickets are gaining traction as protein-rich snacks, there is still an overwhelming lack of knowledge concerning the ecological sustainability of the emerging, multi-million-dollar insects-as-food industry, say researchers at the Swedish University of Agricultural Sciences. In an opinion article published in the journal Trends in Ecology & Evolution, the researchers explore unanswered questions around insect rearing and environmental impacts, but overall they remain optimistic that suppliers will rise to the challenge.

“As the global demand for protein grows, insect mass-rearing can play an important role in the future of food,” says author Åsa Berggren, a Conservation Biologist at the university. “We know that we can't keep doing what we're doing in terms of producing food and utilizing the land.”

While insects-as-food provide environmental sustainability potential due to their nutritional qualities and feed conversion ratios, Berggren and her colleagues, Anna Jansson and Matthew Low, note that many questions need to be urgently addressed before the industry can scale up to ensure sustainability.

“Otherwise, we could risk replacing one environmental issue with another,” notes Berggren. “Though the industry is in its infancy, some companies are getting bigger and some risks will come along with that.”

Speaking to FoodIngredientsFirst, Berggren notes that this perspective is from an ecological and sustainable point of view. “It has great potential for the food industry on the basis that insects have the potential to be a sustainable food product and likely to be nutritious to humans.” 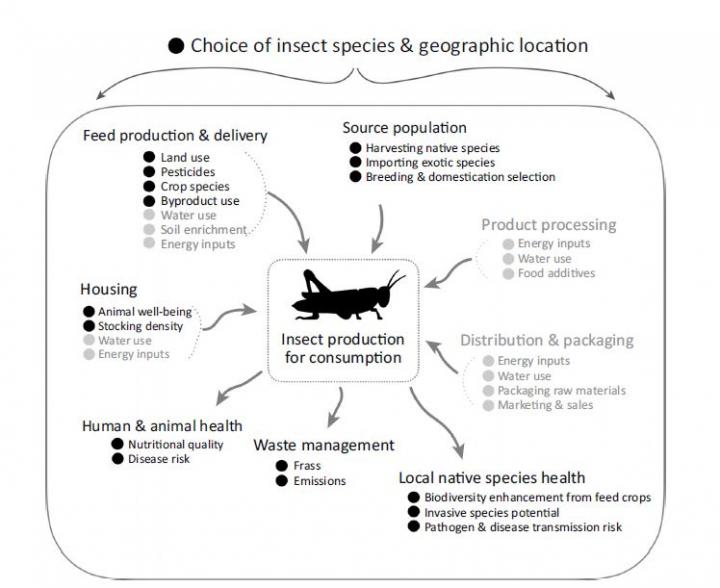 Click to EnlargeThis figure shows the main input and output factors influencing the sustainability and environmental impact of an insects-for-food production system. CREDIT: BERGGREN ET AL./TRENDS IN ECOLOGY & EVOLUTIONBerggren also stresses the importance of choosing the right type of feed for the insects that could be used in food processing.

“The main insects species reared for human consumption today are cricket and mealworm species, and I think the reason these are used is that there is practical knowledge on how to rear these species from experiences from the pet food industries,” she explains.

“Insects that we eat shouldn’t compete with us humans for feed, they should be fed things that we can’t eat,” Berggren continues. “That is one of the major things for consideration, we are using so much land mass in agriculture to feed animals currently and that is something we should aim to address first.”

Sustainability is a primary area of concern. According to Berggren, the Netherlands and Belgium are leading the way in mass-rearing insects.

For example, Proti-Farm, based in the Netherlands, is one of the world’s leading producer of edible insects. The company started with over ten different insect species for the animal feed industry, however, since 2007, the group is producing edible insects for human consumption.

In December 2018, FoodIngredientsFirst reported that AgriProtein, one of the leading firms in insect technology and fly farming, is seeking to expand its reign on the European market by acquiring Millibeter, a Belgian headquartered insect feed company.

“This new food system has a lot of potential, so it would be a shame if we didn’t take full advantage in the best way we can,” Berggren notes.

Of the several areas where research is needed, one of the more urgent ones deals with unwanted systems products. For example, we don't yet know the full impact of mass-rearing insects in countries where these species do not naturally occur. An “escapee” could wreak havoc on the ecosystem and be akin to what Berggren and colleagues describe as a “climate catastrophe.” Other key areas include species and life history trade-offs, sustainable feed production, food safety and ethics.

But since the industry is so young, it will likely take time to make insect-rich food attractive to a wider Western audience. The researchers believe there is still time to conduct further detailed research and shape environmental policies.

“Insects have the potential to be a good, sustainable, useful food source, but it's not as simple as rearing them and then that's it,” says Berggren. “There is a lot of effort that needs to be put into further research,” she concludes.