You are in : All News > EU Parliament rejects calls for phosphate ban 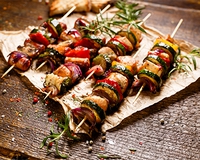 14 Dec 2017 --- A proposal to ban the additive phosphate, a key component in kebabs and gyros, has been narrowly defeated in European Parliament following a vote yesterday (December 13).The legislature fell three votes short of reaching an absolute majority of at least 376 votes for a phosphate ban, which would have seriously impacted the kebab industry, forcing it to find alternatives rather than stop producing the highly popular fast food.

Some in the kebab industry claim they need phosphates to keep the frozen meat tender and juicy, while opponents argue that the additive is a health risk for cardiovascular diseases. Phosphate additives are used in a multitude of foods to enhance flavor and moisture. These also include cheese, bran cereals and other baked goods.

A European Food Safety Agency study into phosphates is planned for next year when the debate will likely be sparked again.

BEUC, the European Consumer Organization, says there are concerns over the health effects of phosphates and their water-binding properties.

Monique Goyens, Director General of BEUC has reacted with disappointment to the vote and is now calling for food labeling on kebab meat so that consumers know exactly what they are getting.

“Phosphates have no place in kebabs and gyros. Sadly, MEPs have decided to authorize these unnecessary additives,” she said.

“There are concerns over the impact of phosphate additives on consumers’ health. So it is wiser to wait for the EU Food Safety Authority’s evaluation before considering to allow them in more foodstuffs. Some manufacturers manage to produce phosphate-free kebabs and gyros and should serve as an example.”

“Now we need member states to require that kebab vendors clearly inform consumers on the presence of phosphates in their meat through labeling and check they do so.

“That’s the very least they should do. Member states should also tighten up checks on the use of additives in the meat sector. This is essential to prevent similar stories from happening again.”

The Paleo Diet – the founding organization behind the corresponding lifestyle movement – has launched a new food certification program based on the... Read More

As the Russian invasion of Ukraine enters its second month, knock-on disruptions to the global food supply chain continue to rage on. In the EU, Parliament is stressing... Read More