You are in : All News > Environmental contaminant PFAS discovered in organic egg yolks in Denmark 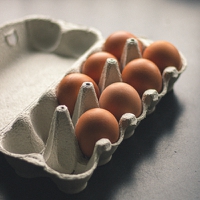 24 Jan 2023 --- The environmental contaminant per- and polyfluoroalkyl substances (PFAS) have been found in organic egg yolks from chicken farms in Denmark, flagging concerns that children who eat organic eggs are at risk.

The substances are most likely transferred via fishmeal, which is included in feed for the hens. This relationship was found because uniform concentrations and compositions of PFAS compounds were found across large chicken flocks that consume organic feed.

This was found in a DTU National Food Institute study carried out in collaboration with the Danish Veterinary and Food Administration.

According to the study, the content was low in eggs from free-range, barn and battery hens.

Speaking to FoodIngredientsFirst, associate professor Kit Granby, at the DTU National Food Institute, says that food business operators should plan for a food production control their organic feed and organic eggs for PFAS, that can potentially contaminate the food and cause a safety risk.

“The authorities shall perform national monitoring programs to control PFAS in the major food raw materials for PFAS and report to EU. Both obligations shall protect the consumers from dietary exposure to chemical contaminants including PFAS,” she explains.

Granby goes on to say that some organic feed producers of other countries also add fish meal to organic feed which can contaminate the eggs.

Children at higher risk
Youngsters aged four to nine who eat more than 2.5 organic eggs per week have a higher chance of consuming too much of the substance.

Youngsters aged four to nine who eat more than 2.5 organic eggs per week are at a higher risk of getting too much PFAS.The European Food Safety Authority (EFSA) has set the tolerable weekly intake of the sum of four specific PFAS (PFOA, PFNA, PFHxS and PFOS) at 4.4 nanograms per kg body weight per week.

Among the children who eat a substantial amount of eggs (five to six eggs per week), the intake is ten nanograms per kg of body weight per week. Citizens in Denmark are further exposed to PFAS from other foods, all of which contribute cumulatively to the overall intake.

“When children are at risk of being exposed to more than twice as much PFAS solely from eggs as the amount that is the limit for a safe intake, the risk is noticeable. Especially when the intake for all age groups is close to the limit of what EFSA assesses as safe,” says Granby.

The EU introduced maximum levels in whole eggs for the four PFAS and the sum of them on January 1, 2023.

This means food items sold before that date might exceed the new maximum levels. It is expected that the EU will later introduce maximum levels in feed, as it has been implemented for other environmental pollutants.

Toxic substance accumulates in food chain
PFAS is an example of a substance group that can migrate and accumulate throughout the food chain – from fish to fishmeal, which is included in chicken feed, via the hen to the egg, where it binds to the protein in the yolk and can then be eaten by humans.

When it is in humans, it can take three to seven years before the substance concentration is halved.

“PFAS are not substances that make you acutely ill, but if you consume too big amounts for many years, the immune system can be adversely affected, such as by impairing the effect of childhood vaccinations, increasing cholesterol levels in the blood, and reducing birth weight,” Granby explains.

“Egg eaters and eaters of free range eggs are already aware of contamination with dioxin and dioxin-like PCBs from atmospheric deposition, which currently are controlled if they are within the EU maximum levels of the contaminants,” she adds.

Another solution needed?
It lasts four to seven days before the contents of PFOS and PFOA, PFHxS in eggs from hens that have consumed contaminated feed are halved.

Therefore, the DTU National Food Institute believes the current problem can be solved.

“Our investigations indicate that the unwanted substance has been transferred to the eggs via fishmeal in the chicken feed. Therefore, a replacement with a non-contaminated feed ingredient could, within a few weeks, significantly reduce the content of PFAS in the eggs,” Granby concludes.

Greek leaders plan to subsidize 10% of monthly food costs for 85% of households and over eight million citizens from February to July next year with money coming from... Read More

For the first time in history, scientists have genetically engineered a hen that lays eggs from which only female chicks hatch. The “Golda hen” was bred from... Read More