The almond, oat and coconut latte mixes will hit UK Tesco shelves initially and will later be rolled out to international markets 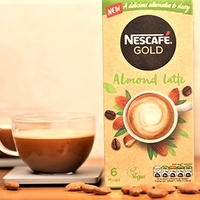 07 Aug 2019 --- Nestlé has launched three plant-based latte coffees in the UK and Ireland under its Nescafé Gold brand. The range of almond, oat and coconut coffees are the world’s first plant-based soluble coffees mixes, according to Nestlé. They will be available exclusively from Tesco until February 2020, after which they will also be available in other retailers across the UK. The products will also be rolled out to other markets across Asia, Europe, Latin America and Oceania. The launch is a response to the growing consumer demand for dairy-alternatives to popular products.

“Our new Nescafé Gold frothy coffees bring the plant-based latte trend out of the coffee shop and into the home, and the three flavors are vegan-friendly. We are quick to spot and embrace fast-moving coffee trends and tastes in this highly competitive and innovative market. Our new plant-based vegan latte mixes will bring new sensory experiences to our consumers,” says Neil Stephens, Head of the Nescafé business in the UK and Ireland.

The products are blends of 100 percent Arabica coffee and the company says that the plant-based ingredients will create a smooth, creamy-tasting latte. Each flavor will be available in packs of six and carry a recommended retail price of £2.98 (US$3.62). Additionally, they will join the range of 17 Nescafé Gold frothy coffees.

Coffee is one of Nestlé’s high-growth categories, with the company investing in various new coffee products. Last month, the Nescafé Azera brand launched teabag-style roast and ground coffee bags in the UK and Ireland. This launch represented a £1.5 million (US$1.9 million) investment in the Nescafé brand, which will also include a standalone television and digital campaign.

Meanwhile, Nestlé and Starbucks are bringing refrigerated creamers to US consumers less than a year after the partnership was formed. “We’re seeing this launch as an opportunity to bring new users into the creamer category, such as people who frequent a Starbucks café but are currently using creams or milks to whiten their coffee in-home,” Daniel Jhung, President of Beverage, Nestlé USA told FoodIngredientsFirst.

These moves came after Nestlé’s 2018 full-year results were released, where Nestlé CEO Mark Schneider noted in a press conference that the company is positioning itself towards “future areas such as plant-based offerings that are very much on-trend with where consumers are heading.”

One of the most significant results of the plant-based boom has been the strong rise in dairy alternatives. There has been a 17 percent average annual growth in dairy-free products (Global, CAGR 2013-2017) of these products, which include dairy-alternative drinks and spoonable non-dairy yogurt. Between 2013 and 2017, soy continued to be the top ingredient for plant-based dairy alternative drinks; however, market penetration is decreasing. Almonds and oats also show strong growth over the years, with a CAGR of 39 percent and 36 percent, respectively (2013-2017).

Another type of plant-based milk that could be coming to the market soon is one derived from water lentils. Parabel USA says that its lentil milk is similar in color to regular milk and captures the high-quality protein and mineral benefits of water lentils while containing no allergens.

A coalition of 25 breweries from across the UK and Ireland have kick started a campaign today calling on world leaders to make concrete commitments to tackle the climate... Read More