You are in : All News > Coca-Cola and Gevo to Develop and Commercialize 100% Renewable Plastic Bottles 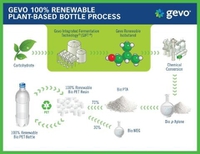 15 Dec 2011 --- Coca-Cola identified Gevo as a leader in the race to commercialize renewable PET following an exhaustive search and evaluation of technologies from around the world.

Dec 15 2011 --- Gevo, Inc., a leading renewable chemicals and advanced biofuels company, announced a groundbreaking agreement with The Coca-Cola Company (Coca-Cola) to create renewable para-xylene from plant based isobutanol, which will accelerate the development of Coca-Cola’s second-generation PlantBottle packaging made from 100% plant-based materials. Gevo will work with Coca-Cola to enable and deliver an integrated system to produce renewable para-xylene, a key building block towards reaching Coca-Cola’s goal of creating all of their packaging from renewable materials. The work will take the technology from lab-scale to commercial scale and support Coca-Cola’s efforts to lead the beverage industry away from fossil-fuel based packaging by offering an alternative made completely from renewable resources.

“While the technology to make biobased materials in a lab has been available for many years, we believe Gevo possess technologies that have high potential to create it on a global commercial level within the next few years,” said Rick Frazier, Vice President Commercial Product Supply, The Coca-Cola Company. “This is a significant R&D investment in packaging innovation and is the next step toward our vision of creating all of our PET plastic packaging from responsibly sourced plant materials.”

Coca-Cola identified Gevo as a leader in the race to commercialize renewable PET following an exhaustive search and evaluation of technologies from around the world. The global market for PET is 54 million metric tons and has a value of $100 billion, with approximately 30% used for plastic bottles. In this next generation of PlantBottle packaging, Coca-Cola plans to produce bottles entirely from renewable raw materials.

“We are extremely gratified to have won the confidence of The Coca-Cola Company and are excited to support Coca-Cola’s sustainable packaging goals with this agreement to develop and commercialize technology to produce para-xylene from biobased isobutanol,” said Patrick Gruber, CEO of Gevo. “New technologies need champions. The Coca-Cola Company is in a unique position to drive and influence change in the global packaging supply chain with this development. You cannot ask for a better champion than one of the world’s most respected and admired consumer brands.”