You are in : All News > Aurum Julii brings 4.0 technology to saffron farming 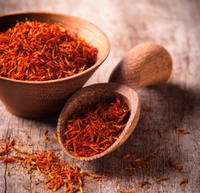 07 Aug 2017 ---  Italian saffron producer Aurum Julii has combined 4.0 technology and tradition to automate the farming process of one of the most labor-intensive crops. The organic saffron producer presented its automation projects at the 3rd International Conference on 4th Industrial Revolution in Teheran.

The company has recently implemented a transplanting machine that is equipped with a hydraulic gear that can place saffron bulbs at a constant depth and with perfect alignment. Once it is fully automated, the transplanter (the first of its kind in Italy) will also be able to collect bulbs directly from a container, thereby optimizing land use and dramatically reducing the time and manual intervention needed.

To extend automation even further, Aurum Julii is currently working with the Polytechnic University of Turin and the University of Cagliari on a harvesting robot and a fluid power system that separates petals from pistils and stigmas.

“The time is right for saffron to embrace new technologies, just like grapevine and corn did before it,” said Aurum Julii's president Luigi Campello. “Our goal is to reduce the labor and stress of the operators and obtain the purest quality saffron while respecting the natural growing process of the crop.”

“Today's demand for saffron stands at over 300 tons,” Campello tells FoodIngredientsFirst. “More than 90 percent is produced in Iran, followed by countries such as India - Morocco - Greece and not lastly 1percent in Italy. Surely we can say that a saffron request exists, but this has not increased but is slowly decreasing for various aspects, including costs. One must make a premise, the saffron that is marketed today in the world ranges from high quality to very low quality,” Campello explains.

“This is to the detriment of the consumer who does not realize what he is buying.  That said we have to face the cost-quality aspect. In westernized countries such as Italy, the cost of production is very high but it is also the quality. In countries especially in the Middle East, production costs are very low and most of all at a disadvantage of quality. But the most important aspect is that with time in the world the saffron culture has been lost in favor of other spices, less cautious but definitely less important than saffron.”

The dream of Aurumjulii, with this first mechanization created, is to make the saffron offer more competitive in the world, starting from the Italian were Made in Italy in food is recognized everywhere and where saffron was already in Roman times much used,” Campello says.

“Certainly, the introduction of mechanization into the saffron system, which is still largely manual, will create the preconditions for increased product quality production, a major boost to precision agriculture and the creation of a better offer to the consumer,” he notes.

“It will also allow an economic crisis in the agricultural sector to resume some of the activities that today are not able to compete with the rest of the world.”

“Even the price will get benefits by allowing the consumer an informed choice,” he adds.

In July, Aurum Julii took part in the 3rd International Conference on Fourth Industrial Revolution in Teheran, where Mr. Campello presented the company's four projects currently under development: an automatic seeder, an innovative process for cutting and harvesting flowers, a fluid power system that separates the stigmas from the rest of the flowers, and a desiccating oven that is specifically designed for saffron.

Currently, 90 percent of saffron worldwide comes from Iran, where the spice is part of the cultural heritage and a common subject of scientific research.

“Iran is the undisputed leader of the saffron industry, so it was a great honor for us to be there,” said Aurum Julii's CEO Andrea Finco. “The most exciting part was to discover how growers from all around the world share a common desire to deliver a superior quality product and understand that technology plays a crucial role in it.”

Gold Coast Ingredients have created a new line of flavors that replicate the flavor profiles of gourmet ingredients and delicacies from around the globe.