You are in : All News > A bitter “no deal” surprise? “Hard Brexit would double costs on sugar imports,” Tereos exec warns

15 Jan 2019 --- A “hard” Brexit would have devastating ramifications for the European sugar industry with tariffs of over 100 percent entering into force if no deal is signed prior to the UK’s March 29 exit date from the EU. This is according to Guillaume Planque, Head of Product Management – Sugar & Sweetening Solutions at French-headquartered Tereos, the world’s number 2 sugar producer.

“If the UK were to exit the EU without a deal, then the rules of the WTO will probably apply on sugar too. This means that you will get an additional tariff of €419 (US$481) per ton on white sugar and €339 (US$389) per ton on raw sugar. This is an over 100 percent price increase for UK food and drink manufacturers,” he explains to FoodIngredientsFirst.

Planque highlighted a recent Barclays commissioned study, which noted that food retailers and suppliers could lose GB£9.3 billion as a result of new tariffs if Britain leaves the EU without a deal. The report, which was published in September 2018, said that food and drink entering the UK from the EU would be subject to a new average tariff of 27 percent, significantly higher than the 3-4 percent levy that would be applied to non-food products. In the other direction, some 60 percent of UK food and drink exports are destined for the EU.

Click to EnlargeGuillaume Planque, Head of Product Management – Sugar & Sweetening Solutions at French-headquartered Tereos“We do believe that it is better that a free and frictionless trade relationship between the EU and UK is maintained to protect UK sugar supply. It is really key to continuing competitiveness on the market and maintaining choice, and reasonable prices for both food manufacturers and consumers,” says Planque.

The UK is a deficit market for sugar, sweeteners and starches, with a large chunk of the shortfall coming from imports from the EU. “If we look at the sugar market in 2017-18, the UK’s sugar production was 1.3 million tons, with a market demand sitting at 1.8 million tons per year. This means that there is a deficit of 500k tons to be met by imports, much of which comes from the EU,” Planque explains. The majority of EU imports come from France, with Tereos functioning as a key supplier to their neighbors across the channel.

Like the rest of the EU sugar sector, Planque is keeping his fingers crossed on the vote to take place in Westminster today. The general consensus is that Prime Minister May’s deal will not get through Parliament, and, as Planque quips, “the only certainty in Brexit is uncertainty.” He is therefore hopeful of the UK finding a good deal scenario for Brexit. “That will be good for the UK food industry as well as for the consumer,” he notes. “For the sugar industry, it is very important that we do hope for a ‘soft’ Brexit scenario, meaning that no additional tariffs will be set up for different reasons,” he notes.

Like much of the EU food industry, Tereos has been prepared for Brexit implications, particularly around logistics. “We have been very aware of this and have been following it very carefully. We pay specific attention on the logistics side to see what is possible and whether we can increase delivery to the UK. We are looking at options on the storage side. But we have to be realistic as Brexit is a concern for all the industry,” he notes. “We will be prepared for Brexit and our aim is to support the UK food drink industry and consumers as much as we can, as Tereos has a long term commitment in place to the UK market,” Planque adds. “Tereos is a large employer in the UK, with three facilities in Selby, Normanton and Immingham. As an example Tereos facility in Normanton, West Yorkshire employs over 100 people and spent over £9 million with local suppliers and contractors in the last year alone. Tereos supplies the UK market with a broad range of products including sugar, alcohol and starch & sweeteners serving the food, beverages, animal nutrition, pharmaceutical and paper & board industries.”

One of the key concerns for the sugar and sweetener industry relates to the transport of liquid sweeteners to the UK if strict customs hurdles do come into place. While the shelf-life of dried sugar is significantly longer than that of dairy products, for example, liquid sweeteners do bring challenges, as customers will expect a continuous flow of product that meets supplier specifications.

“Here you have to pay specific attention to the temperature involved. Therefore a long delay at the border might really be an issue,” he explains. “There are limits when you transport liquid syrup, as there is a temperature that you cannot go below otherwise this may affect the product, depending on the waiting time you will get, your storage and trucks,” Planque says.

Buoyancy in the sugar sector
Brexit would come after a buoyant period in the European sugar sector, following the lifting of quotas on October 1, 2017, where liberalization became the order of the day. Production rose by roughly 25 percent from 16 million tons during the times of sugar quotas to some 20 million tons post-quota [in the 2017-2018 campaign]. “The market has been liberalized and it is a big change in the sugar industry,” says Planque. The significant increase in production is due to different factors, including increases in acreage and yields has been very important and the adaptation of the sugar industry,” he notes.

Tereos was able to expand its first post-quota campaign length to 145 days in its last efforts. “The end of quotas has been something that Tereos was duly prepared for, for a long time. It has been well managed thanks to the adaptation to the market, whether for domestic trade or on an export front,” says Planque. “This has been a big change and today this is still the case with a changing market. This year we should very likely back to matching sugar production and sugar consumption. We might expect something similar in the coming year,” he adds.

But it has not all been sweet news, with the 2018 northern European drought significantly impacting yields.  Yields on EU sugar beet were on average 5 percent below the 5-year average and 15 percent lower than last year's campaign, which is unrelated to volumes produced. 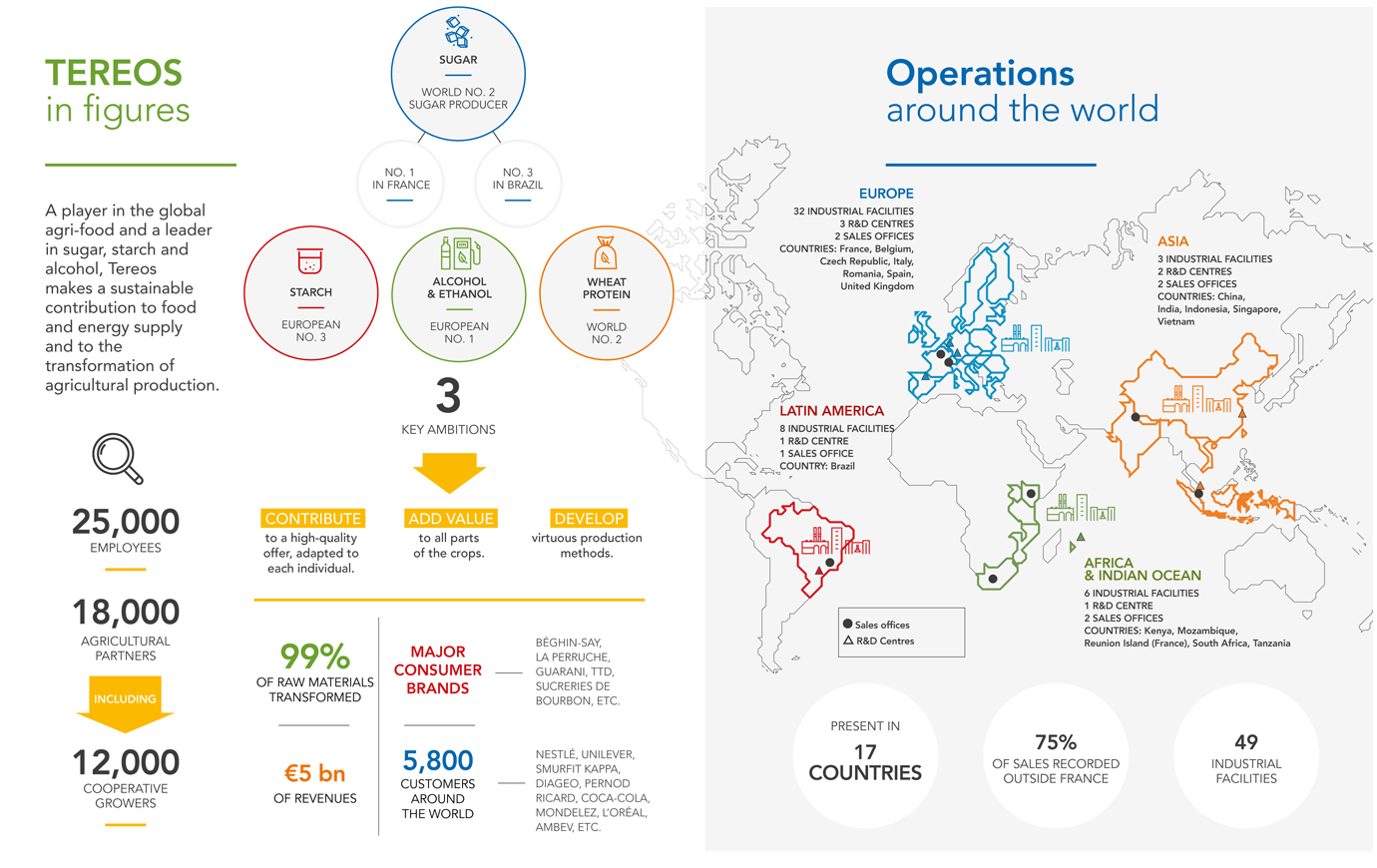 Click to Enlarge“The weather was very warm last summer. This has had an impact on the yield of the beet sugar and from this respect production has been lower than the year before. In this campaign we are effectively at a break even between production and consumption,” says Planque. He did stress, however, that the reduction should be placed in context as yields from the first campaign post quota was exceptionally good too.

But the incredibly hot summer does raise concerns that these types of events will be much more regular amid the onset of climate change, requiring agricultural innovation in order to cope. For example, Tereos has been using a fertigation process for some 20 years and now uses this on five of its sites.

“Fertigation functions as a sustainable agricultural method, limit water extraction from groundwater pumping. Sugar beet is made of 75 percent water. We use this water in our process to remove the ground that you get on the beet and the rest is something that the growers can use afterwards,” he explains. “What is interesting is that in the sugar beet you also get some minerals, so that this water is enriched with these minerals, such as nitrogen and phosphorous. This is what they use to irrigate and fertilize their crop,” he adds.

Planque claims that sustainability is part of the company’s DNA. He notes, for example, that Tereos France was evaluated in 2017 as being among the top 12 percent of over 5,600 international companies that have been evaluated by this program in terms of the supply chain climate change category by the Carbon Disclosure Project. “Our activity on sugar beet in France, Spain and in Czech Republic is SAI evaluated. 100 percent of our growers are ether gold or silver. We will likely develop this evaluation even further than these three countries,” he adds.

For Planque, future growth in the sugar market will focus on consumer trends, including sustainability, where consumers seek products that are “good for them but also good for the planet.”

“Sustainability plays a key role for the purchasing of consumers and everything we do we do in a sustainable manner. What we also see is that consumers are seeking ingredients that they know and are familiar with. They also seek clean and clear label and beet sugar is part of this,” he notes.

Planque disclosed that a major move for Tereos in 2019 will be the company’s production of their own organic beet sugar from October this year. “Tereos has been active in commercializing organic cane sugar for more than 15 years. So we are a key player in the market and are now going one step further with organic beet sugar that we will produce in France,” he says. “Own production for organic cane sugar is also in the picture with some production in Brazil and Mozambique in the coming years,” Planque says.

This space is still a niche, albeit a promising one. “Organic beet sugar is still in its infancy in Europe and we need to build a new ecosystem. You need farmers to partner with you to produce organic beet. Then you need Tereos to transform it into organic sugar and someone to take it to the market. It will take time but consumers’ demand is there. We will go as fast as we can but also want to make it as good and as fair as possible,” he adds.

The production of organic beet sugar will be one of the innovative playing fields for the future, but the immediate focus for the sugar sector will be on London and on assessing what the potential Brexit ramifications will be.

10 Dec 2019 --- Despite pressure building for the industry to slash sugar rates in their products, consumers still crave sweet flavors. Innovation in the cultures and enzymes space... Read More

10 Dec 2019 --- Taura Natural Ingredients used Fi Europe 2019 as a platform to launch a new range of fruit solutions that deliver the benefits of fiber without compromising on... Read More