You are in : All News > ZSL Reports on the Hidden Hectares of Palm Oil Production

ZSL Reports on the Hidden Hectares of Palm Oil Production 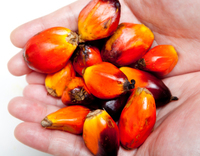 22 Mar 2017 --- According to the latest analysis from the Zoological Society of London (ZSL) there are large masses on land used in connection with corporate palm oil production than currently are not reported - with several global palm oil producers failing to publicly disclose their total land holdings.

Conducted by ZSL’s specialist SPOTT team (Sustainable Palm Oil Transparency Toolkit), the new report - called Hidden Land, Hidden Risks - found that many companies frequently report on the areas of planted land they hold, rather than the total land under their management.

This misreporting potentially excludes vast areas of land at environmental and social risk – such as undeveloped land that, if converted into plantations in the future, could be at risk of environmental damage, including deforestation.

Unreported areas could also include infrastructure areas (e.g. roads) where negative impacts must be mitigated, or areas set aside for the conservation of critically endangered forest species such as Sumatran tigers and orangutan, where positive impacts must be demonstrated.

Transparent reporting on these ‘land banks’ is regarded as a fundamental cornerstone for palm oil growers in demonstrating their sustainability commitment, according to the ZSL.

Speaking with FoodIngredientsFirst ZSL’s SPOTT palm oil manager Izabela Delabre explains the importance of comprehensive reporting on land holdings and how essential it is for greater accountability in the palm oil sector.

“Producers can’t manage what they can’t measure. While some companies are failing to disclose this information publicly through platforms such as the Roundtable on Sustainable Palm Oil (RSPO), some may even lack accurate figures on their holdings,” she said.

“There is a lack of clear expectations on transparency and reporting. ZSL’s SPOTT initiative is working to bring clarity to this, by working with other stakeholder groups and reporting initiatives, to clearly communicate to companies what is expected from stakeholders in terms of disclosure of information.”

“There is also lack of understanding across the industry, including from investors, that unplanted areas are important to report on, in terms of assuring against environmental and social risks. Some companies might not declare how much unplanted land they hold because they may have yet to assess its suitability for development. Land may also be at different stages in the permitting process, complicating disclosure of total land under management.”

Stayed tuned with FoodIngredientsFirst, where next week we will be featuring a Special Report on the Palm Oil Industry.

15 Apr 2021 --- Ghana and cocoa and chocolate companies have collaborated on a deal poised to protect and restore forests in cocoa-growing areas. With this agreement, the... Read More

02 Apr 2021 --- This week in industry news, Fonterra completed the sale of two China farms, and Sun-Maid Growers of California is on track to acquire Plum Organics from Campbell... Read More

04 Mar 2021 --- Bunge is launching an initiative to monitor soybean crops in the Brazilian Cerrado, one of the high-risk areas of deforestation in Brazil. The program will help... Read More