You are in : All News > West Africa food security: Greenpeace calls for urgent action on overfishing and illegal fishing 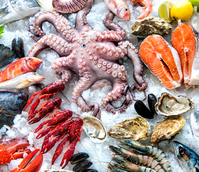 21 Nov 2017 --- Vessels arrested for illegally fishing in West African waters are still carrying on with business as usual, claims a Greenpeace Africa report released today on World Fisheries Day. The report, “The Cost of Ocean Destruction”, details how West African fishermen and communities continue to suffer from the consequences of overfishing and illegal fishing in this region and it provides specific recommendations for Governments on how to solve the crisis.

Greenpeace is calling upon West African governments as well as nations fishing in, or importing seafood from the region, to stand together to protect millions of Africans against the unceasing onslaught of industrial fishing fleets.

The NGO is also demanding that authorities provide follow-up information on fishing vessels and crews that were arrested during a joint patrol by Greenpeace and African fisheries inspectors last spring.

Pavel Klinckhamers, project leader in Greenpeace Netherlands, said: “The current situation in West Africa is a result of decades of overfishing and inaction, but it is also a result of commitments from West African governments and foreign fishing nations, like China, South Korea and the EU, that were simply never translated into reality. Coastal communities are the ones paying the price and they cannot wait any longer. African states and foreign fishing nations in the region have to change course and put in place the policies that these communities need in order to survive.”

In only twenty days, Greenpeace and fisheries inspectors from Guinea, Guinea Bissau, Sierra Leone and Senegal came across 17 vessels contravening applicable rules, while 11 of these vessels were arrested for infractions which included involvement in illegal transshipment, fishing in breach of their license conditions, using illegal nets and shark finning. However, only 6 months later, all 17 vessels are still licensed to fish in West African waters, and in most cases, local authorities are not responding to requests from Greenpeace to clarify what legal steps were taken after the arrests. Chinese authorities have ordered provincial authorities to punish the captains of some of the Chinese vessels involved in infringements, while specific subsidies to their operations have also been cancelled. The general lack of information on each case is symptomatic of the lack of transparency and accountability of governments when it comes to fisheries policies.

“West African countries keep signing new and opaque fishing agreements with foreign countries without putting in place the means to monitor their activities and sufficiently take the interests of local small-scale fishermen into account. This kind of practice has disastrous consequences for the marine environment, for local fishermen and hence for African communities as well,” Pavel Klinckhamers said.

One of the main fishing players in the region, China, is currently conducting a revision of its Provisions for the Administration of Distant Water Fishery. The review will include new sanctions for IUU fishing, however It is still crucial to ensure transparency, effective implementation, and the strengthening and effective enforcement of punishment measures by coastal West African countries, when vessels break the law. Also, a number of new fisheries agreements are currently in the making. Last month China signed long term fisheries agreements with Sierra Leone and Mauritania, and the EU is working on a fisheries agreement with Guinea Bissau, since the current protocol will expire later this month. According to unconfirmed information, Senegal and Russia are also holding conversations around reintroducing Russia’s industrial fishing fleet, that was kicked out of Senegal back in 2012.

“This is not a quick fix, and we need everyone involved in West African fisheries to cooperate. For African states in particular, they need to manage shared resources jointly and ensure priority is given to the labor intensive, small-scale sector. This sector which directly employs one million people and generates €3 billion annually. At the same time, we need foreign fishing nations to ensure their fleets do not undermine the sustainability of fisheries in the countries they operate in,“ Ibrahima Cisse, senior oceans campaign manager in Greenpeace Africa, said.

Greenpeace claims: “For more than 15 years, Greenpeace and other NGOs have warned against overexploitation of fish stocks in West African waters and its serious impacts on livelihoods, food security and employment for millions of people in this region. Also, we have outlined how substantial progress can be made through strong cooperation and harmonization of West African fisheries policies and legislation. In fact, regional cooperation has been at the core of an already established mandate for West African countries of the Subregional Fisheries Commission, SRFC, since 1985. Still, very little has been done in reality to turn the tides for West African waters, and the situation out at sea in West Africa and the consequences on land, are alarming.”

01 Sep 2020 --- Ocean lobby groups and NGOs have been left reeling following the latest European Commission proposal for Baltic fishing limits for 2021. While they welcome plans to... Read More

07 Aug 2020 --- The UK’s largest retailer Tesco is urging the government to mandate food companies, as part of its National Food Strategy, to introduce effective due... Read More

Fishing through COVID-19 pandemic as export markets dry up

23 Mar 2020 --- In light of the global COVID-19 pandemic, the export market for the types of fish caught by British fishers is drying up. Sustainable Fish Campaign Coordinator Ruth... Read More

25 Jul 2019 ---  Commercial fishing for cod in most of the Baltic Sea has been banned until the end of the year following a directive from the European Commission. The ban is... Read More