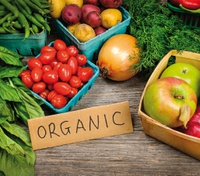 20 May 2016 --- The booming US organic industry posted new records in 2015, with total organic product sales hitting a new benchmark of $43.3 billion, up a robust 11 percent from the previous year's record level and far outstripping the overall food market's growth rate of 3 percent, according to the Organic Trade Association's 2016 Organic Industry Survey.

The industry saw its largest annual dollar gain ever in 2015, adding $4.2 billion in sales, up from the $3.9 billion in new sales recorded in 2014. Of the $43.3 billion in total organic sales, $39.7 billion were organic food sales, up 11 percent from the previous year, and non-food organic products accounted for $3.6 billion, up 13 percent. Nearly 5 percent of all food sold in the US is organic.

2015 was a year of significant growth for the industry despite the continued struggle to meet the seemingly unquenchable consumer demand for organic. Supply issues persisted to dominate the industry, as organic production in the U.S. lagged behind consumption. In response, the organic industry came together in creative and proactive ways to address the supply challenge, to improve and develop infrastructure, and to advocate for policy to advance the sector.
"The industry joined in collaborative ways to invest in infrastructure and education, and individual companies invested in their own supply chains to ensure a dependable stream of organic products for the consumer. Despite all the challenges, the organic industry saw its largest dollar growth ever. Organic will continue to be the most meaningful farm-to-fork – and fiber – system," said OTA's CEO and Executive Director Laura Batcha.
Produce the gateway to organic
Organic produce retained its longstanding spot as the largest of all the organic categories with sales of $14.4 billion, up 10.6 percent. Produce has always been and continues to be a gateway to organic. It's easy for shoppers to make the connection between agricultural practices used in the field and the fresh fruit or vegetables they bite into. Almost 13 percent of the produce sold in this country is now organic. 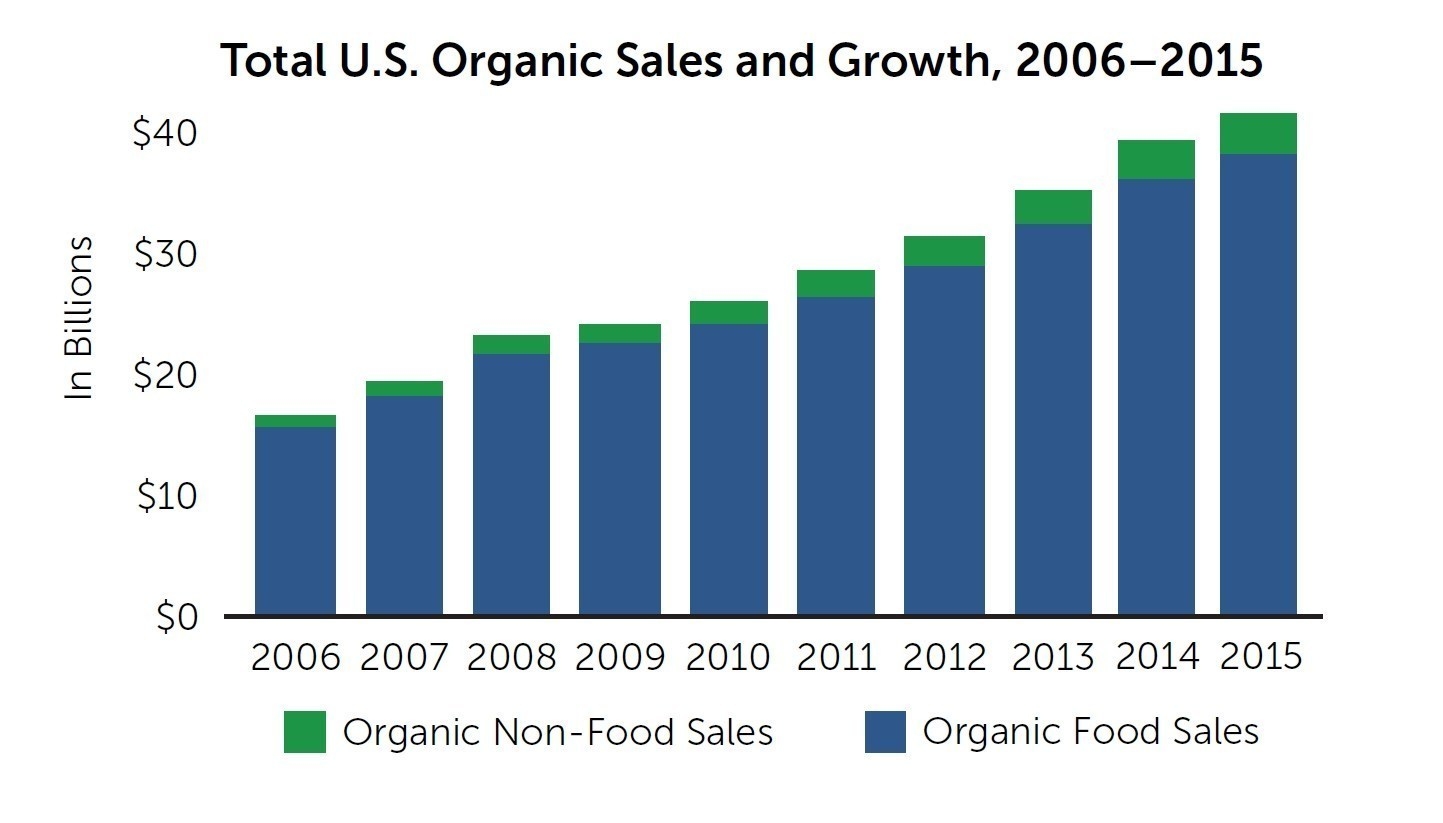 The demand for fresh organic was most evident in the continued growth of "fresh juices and drinks," which saw explosive growth of 33.5 percent in 2015, making it the fastest-growing of all the organic subcategories. The fastest-growing of the eight major organic categories was condiments, which crossed the $1 billion mark in sales for the first time in 2015, on 18.5 percent growth.
Dairy, the second biggest organic food category, accounted for $6.0 billion in sales, an increase of over 10 percent. Dairy accounts for 15 percent of total organic food sales.
"Farm fresh foods – produce and dairy – are driving the market. Together, they account for more than half of total organic food sales," Batcha observed. "The organic market looks like a healthy plate."
That said, Americans still like to snack, and more and more of us are snacking organically. Also seeing a big growth in sales in 2014 – and more than triple the level of just 10 years ago – was the organic snack food category, with sales of $2.3 billion, up almost 14 percent from 2014.
Consumers are not just eating organic, they are incorporating more into their total lifestyle. Organic non-food products continue to gain in popularity. Even though non-food products account for just 8.2% of overall organic sales, the almost 13 percent growth rate in the sales of organic non-food products outpaces the growth rate in organic food, as well as the overall growth of comparable products, primarily conventional, which inched up by a mere 2.8%. Growth in the non-food category was led by organic fiber, followed closely by organic supplements.
More accessible, but challenges persist in supply chain
Increased consumer demand for organic products in 2015 could also be attributed to greater access to these products from mainstream retailers. As supermarkets, big box stores, membership warehouse clubs, and other outlets continued to up their organic offerings, organic options have become more available than ever before.
The growth in the organic market, however, did not come without continued challenges to the supply chain. Dairy and grains were two areas where growth could have been even more robust in 2015 if greater supply had been available. There is an industry-wide understanding of the need to build a secure supply chain that can support demand. This goes hand-in-hand with securing more organic acreage, developing programs to help farmers transition to organic, and encouraging new farmers to farm organically.
Some companies are dealing with these supply issues individually. Meanwhile, others are working together to address this concern. One example is the US Organic Grain Collaborative, whose members include Annie's, Stonyfield, Organic Valley, Clif Bar, Nature's Path and Grain Millers, among others. On the fiber side, 2015 saw the creation of OTA's Organic Fiber Council, which includes members from across the organic fiber industry, and whose focus is to increase the awareness of the benefits of organic fibers and to encourage more organic cotton acreage in the US
Despite strategic challenges, OTA's Batcha is confident about the industry's future prospects. "Organic is a bright spot in agriculture and the economy of America. Our success will continue to be built on a solid foundation of stakeholder engagement, transparency and meaningful organic standards that consumers trust in."
U.S. Agriculture Secretary Tom Vilsack responded to the announcement: "America's organic industry is booming, creating important opportunities for farmers and ranchers and adding to the vibrancy of rural America. Under the Obama Administration, we've made transformative investments to help the organic sector thrive by making certification more attainable, providing more support for organic operations, and expanding international markets. As consumer demand continues to grow, USDA is here to support producers and help them access the hunger for American-grown organic products."

Stevia giant Sweegen has expanded its footprint into China by formulating premium low-calorie confectionery chocolate for the brand TeChoco. The move is in recognition... Read More

Novastell focalizes on ethically sourced and organic ingredients, in line with consumer demand

From being a lifestyle choice for a small consumer segment, organic foodstuffs and functional products are growing in market share. This is according to Avril group... Read More