You are in : All News > SPECIAL REPORT: Fermented Foods Set to Flourish in 2016 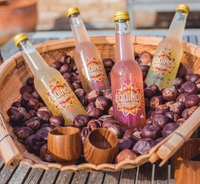 09 May 2016 --- The health benefits of fermented foods are being reported on increasingly, with western consumers widely opening up to new concepts. Consumption of fermented foods can be traced back thousands of years, if not longer, but it seems in 2016, buoyed by new product developments and consumers’ heightened awareness of the negative perceptions of processed foods, fermented foods are to establish themselves as a major food trend. FoodIngredientsFirst explores the changes in interest of fermented foods.

Fermentation is part of one of the top products trends for 2016: Processing the natural way. Fermented products are natural and easy to understand and this has been emphasized with an increased amount of fermented products with and within the dairy category.

29 Oct 2020 --- DouxMatok and Lantic, a North American sugar manufacturer, are collaborating to deliver a unique sugar reduction solution based on cane sugar to food companies in... Read More

28 Oct 2020 --- Kerry is drawing attention to new frontiers for the alternative meats sector, where regional plant-based appetites are developing.

Navigating clean label standards: How will dairy proteins hold up?

27 Oct 2020 --- Clean label standards are moving beyond the substitution of artificial additives or the removal of controversial ingredients. It’s also about offering... Read More

26 Oct 2020 --- Texture remains a key element of standout product development. Differences across regional preferences are expanding the trend into formats, such as drinkable... Read More

26 Oct 2020 --- The European Parliament has rejected a proposal to ban the use of words like “sausage” and “burger” to describe vegan and vegetarian... Read More