You are in : All News > Rooting for Cassava - the Vegetable with Tons of Potential

Rooting for Cassava - the Vegetable with Tons of Potential 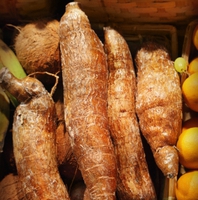 28 Oct 2016 --- Improving yields of calorie-packed cassava crops in Sub Saharan Africa could be game changer for regions where the population is predicted to grow by 120 percent in the next 35 years. Despite the cassava being a staple food on the continent, yields have not significantly increased since 1961 and yet this vital carbohydrate-heavy crop accounts for 30 percent of a person’s daily calorie requirement.

To put it into perspective, the African population is currently 1.2 billion and is expected to reach 5.6 billion by 2100. This is against a backdrop of changes in the global climate that will affect crop productivity, primarily increases in temperatures, increased incidences of drought, rising atmospheric carbon dioxide and elevated surface ozone, as well as exhaustion of water resources for irrigation. Predictions are that cassava production across Sub Saharan Africa will decline 18 percent if things don’t change.

As global food demand increases, for many of the poorest people on the planet - particularly in Sub Saharan Africa - thinking about the future of foodstuffs needs to happen now and this is where a new study into cassava (Manihot esculenta) and photosynthesis comes in.

The new review brings together research on the potential for improving cassava yields, such as by boosting the efficiency with which the plant captures sunlight and converts it into sugars.  This is the first publication that has explored improving photosynthesis, in conjunction with other aspects of physiology, in cassava.

The paper quantifies 14 different routes to yield improvements that might be achieved through genetic modifications of the plant. Individual improvements could realize as much as 25 percent to 100 percent improvements in yield as well as water and fertilizer use efficiency.

“Cassava is so important to so many people, yet while we have seen massive efforts to scientifically understand and improve the yields of other crops, in comparison cassava has been neglected,” says lead author Steve Long, Gutgsell Endowed Professor of Plant Biology and Crop Sciences at the University of Illinois. “Here we have summarized and integrated scientific knowledge of the crop as a basis for understanding how sustainable yield improvement might be achieved and to identify critical gaps in knowledge.”

Cassava is also important as a crop that is resistant to climate change, but it has not received the same amount of attention as other staple food crops. Currently, the largest producer of cassava in the world is Nigeria, followed by Thailand, Indonesia, Brazil and the Democratic Republic of the Congo.

It’s a vital food crop for more than 600 million people worldwide and thrives on marginal lands, especially in semi-arid tropical and subtropical lands that could be the most severely impacted by climate change.

“An alternative would be to introduce new crops that have higher yields, but there are good reasons for favoring cassava, and cultures cannot change and should not be expected to change overnight,” added first author Amanda De Souza, a postdoctoral researcher with the project. “With all the know-how in growing and preparing cassava as a food, it makes the most sense to improve this crop rather than try to replace it with other crops.”

“We found cassava is photosynthesizing far below its theoretical limit,” De Souza said. “If we can improve photosynthesis, we might gain large sustainable increases in the yield of this important crop.”

In the future, De Souza believes this paper - which was published in New Phytologist and will be available online - will serve as a tool. “I think this manuscript can guide people that want to improve the yield of cassava.”

Andrés Manuel López Obrador, president of Mexico, is demanding US beer producers move to the South and Southeast to preserve the country’s water... Read More