You are in : All News > Fonterra confirms Murray Goulburn bid along with “solid” year-end results 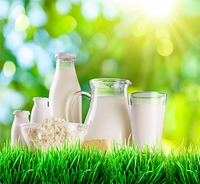 27 Sep 2017 --- Dairy cooperative Fonterra has confirmed that it has lodged a bid for Australia’s largest dairy processor, Murray Goulburn, and also released its full-year results. A number of groups are believed to have made offers for the struggling company, but Fonterra was the first to confirm its interest on the back of a successful business year.

“The answer is yes, we have put forward a proposal,” Fonterra Australia Managing Director Rene Dedoncker told Australia’s ABC Rural radio station. “It’s non-binding and indicative and at this point, we are going to sit tight and give the MG board the respect they deserve to consider all proposals.”

Murray Goulburn has sought bids as part of a strategic review after a poor couple of years. Last month it announced a sales decline of 10 percent in its fiscal 2016/17 year-end results.

Conversely, Fonterra’s full-year results have been described as successful. The company announced that it had seen its net profit fall by 11 percent in the year to July 31. However, revenue rose to NZ$19.2 billion (US$15.52 billion), up 12 percent from NZ$17.2 billion (US$12.3 billion) the year before. Rising prices were said to offset a 3 percent decline in volumes. The 2016/2017 Total Cash Payout was US$6.52, up 52 percent on last season.

It has been reported that Fonterra Australia is overtaking Murray Goulburn as Australia’s largest milk processor, collecting a reported 2 billion liters of milk last year. However, if the deal were to go ahead, the two companies would collect between 40 percent and 50 percent of the milk produced in Australia, posing competition issues.

Fonterra serves Asia’s protein demands
The Asian protein ingredients market forecast to grow by 11.5 percent from 2016 to 2020, according to Fonterra NZMP Ingredients General Manager for South & East Asia, Hamish Gowans. He told FoodIngredientsFirst in a podcast interview: “We have a broad set of markets that we deal with but in terms of proteins specifically we are seeing quite strong growth here – probably around 11.5 percent growth CAGR, there's a global growth, which is still strong at 6.5-7 percent, so the market for protein is growing and following some of the key trends that have been around for some time, certainly in places like Europe and the US, those trends are flying through into Asia, China, Japan, and those trends are being driven by a number of things. General knowledge and an increased understanding of health and wellness, governments are also having a role to play here as they look into areas such as aging population. Certainly, knowledge is building around dairy, and protein is becoming a key trend that we are seeing increased demand for in these areas.”

“Protein is rapidly evolving from a ‘fitness’ to a ‘health and wellness’ ingredient, as incomes rise and people become more aware of its benefits. Although protein has long been associated with bodybuilders and elite athletes, protein-fortified food has now expanded into the mainstream,” Gowans says.

“Protein boosts and maintains muscle, helps with weight management, improves growth and development, and helps to keep people active as they age.”

“Dairy, in particular, is an excellent source of high-quality protein and is a tremendous nutritional bundle. Protein from dairy is among the highest quality protein available, providing more digestible essential amino acids per gram than other protein options, such as soy,” Gowans added.

You can listen to the podcast interview with Gowans here.

Encouraging results
Fonterra Chairman John Wilson says the co-operative’s ability to maintain its forecast dividend despite the milk price increasing by 57 percent over the year and that the impact of negative stream returns was an excellent result.

“We will always need to manage variability across our co-operative – both in global markets and in our local farming conditions. We’ve demonstrated our ability to deal with those conditions and deliver on our strategy again this year,” says Wilson.

“Despite lower milk volumes due to poor weather in parts of the season, the business delivered a good result by prioritizing higher value advanced ingredients and growing our sales of these in-demand and specialized products by 473 million LME (liquid milk equivalents) this year,” Wilson adds.

Chief Executive Theo Spierings says the quality of the co-operative’s performance and its solid earnings resulted from two consistent themes.

“We have been clear and single-minded about delivering to strategy, leveraging our scale efficiencies and prioritizing value and higher margin products. At the same time, we have tapped into the expertise of our people to come up with innovative ways to generate higher returns for the future,” says Spierings.

In addition, Spierings says that the company’s new product development and strong customer relationships in key markets are capturing more and more of its full potential in its consumer and foodservice categories, evidenced by its Anchor Food Professionals Foodservice business, which grew at 10 times the market growth rate over the past 12 months.

Spierings notes that, over the past year, Fonterra has commissioned or announced new investments across the full range of its consumer and foodservice product portfolio. This has included new UHT lines at Waitoa, butter and cream cheese expansions at Te Rapa, construction of the co-operative’s largest mozzarella plant at Clandeboye, two new cream cheese plants at Darfield, and the reopening of its cheese and whey plants at Stanhope in Australia.

“Foodservice, in particular, is a demand-led business and each of these investments is backed by a growing customer order book. Having the capacity and ability to quickly meet demand in this segment is critical to developing customer relationships and is our ticket to the game in many of our key markets,” says Spierings.

Trusted globally, NZMP ingredients are sold in more than 130 countries worldwide and can be found at the heart of some of the world’s most famous food and nutrition brands.

NZMP is the dairy ingredients brand of Fonterra, the world’s largest dairy exporter, delivering a combination of unmatched expertise and has one of the broadest range of ingredients in the dairy industry, providing hundreds of solutions to meet the needs of customers every day. This gives you more flexibility to fine tune your ingredient selection, whether it’s from core ingredients such as milk powder or butter, or specialised proteins for a wide range of sports and nutritional applications or infant nutrition.

25 Mar 2020 --- High-protein bread is the next bold step for Finland-based start-up Solar Foods on its quest to disconnect protein production from agriculture. Earlier this year,... Read More

23 Mar 2020 --- In a new Rabobank analysis, the outlook for global poultry in 2020 will be materially affected by the current coronavirus pandemic. Even during the economic... Read More