You are in : All News > Conservative party win: UK industry calls upon administration for raised export activity and climate action

17 Dec 2019 --- The UK Conservative party’s recent general election majority win is spurring conversations surrounding the landslide victory’s implications for the nation’s food and drink sector. With imminent Brexit looming ahead, calls for a robust future trade policy have come to the fore as the UK prepares to depart from the EU’s single market. Adjunctly, sector representatives are urging the current administration to take heed of the nation’s “climate and nature emergency.”

“The UK Food and Drink Federation [FDF] has already submitted evidence to Defra’s independent review which will shape the National Food Strategy. We believe a comprehensive food strategy for England can help unlock growth and productivity potential for our sector, ensuring that we continue to provide consumers with safe, affordable and sustainable food and drink. An obvious starting point for this is for the new government to proceed with FDF’s proposals for a new partnership approach to address critical gaps in the provision of specialist export support,” Dominic Goudie, Head of International Trade at FDF, tells FoodIngredientsFirst.

This is not the first time the FDF has emphasized the untapped potential for UK exports in lieu of shortened reliance on EU shipments ahead of Brexit. In the FDF’s recent The Food and Drink Industry Report 2020 issued in collaboration with Spanish multinational bank Santander, the export markets of China, India, Japan, UAE and the US were pegged by analysts to have seen considerable year-on-year growth.

“Overseas sales for UK food and drink have doubled in little more than a decade. Salmon, chocolate and cheese remain the UK’s top three food exports, with a combined value of over £2 billion [US$2.6 billion] in 2018. Our most recent exports snapshot showed that exports to Asia grew by 10.2 percent to £585 million [US$773 million] in the first nine months of 2019, with exports to Japan, China, Taiwan and India having seen year-on-year growth in food and drink exports of more than 20 percent,” Goudie explains. The volume of UK meat and meat-products exported to China has nearly doubled year-on-year, reflecting China’s growing demand for quality UK food and drink, as seen across many categories, he adds.

According to statistics by UK agri-food association Sustain, the nation’s food system employs 3.9 million people (13 percent of UK employment) and is currently worth £113 billion to GDP. In October, a shrinking labor supply across the UK food supply chain was underscored by the Food and Drink Sector Council (FDSC). Net migration is predicted by the Office for National Statistics (ONS) to decline by approximately 120,000 people by 2023. 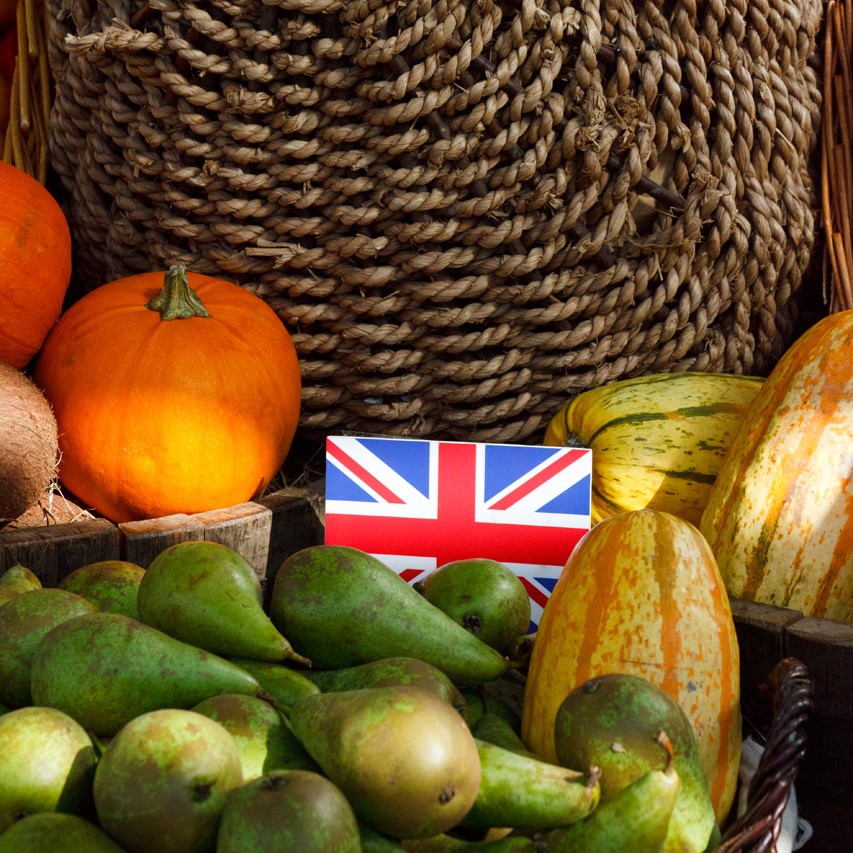 Click to EnlargeNext to the need for stimulated export activity, climate-smart agricultural policies are called for across the sector.Averting a “climate and nature emergency”
In conjunction with calls to stimulate sector productivity, industry representatives have also been vocal about the rethinking of food systems in light of a “climate and nature emergency.” According to statistics by agri-food association Sustain, over 70 percent of UK land area is used for farming; over 30 percent of greenhouse gas emissions arise from the food system; while a third of the food produced goes to waste. Meanwhile, intensive farming and fishing practices were pegged as the main drivers of biodiversity loss on land and at sea.

“The new Conservative government must now honor its promises not to compromise the UK’s environmental, animal welfare and food standards in trade negotiations,” says Vicki Hird, Sustainable Farming Coordinator for Sustain. “We are in a climate and nature emergency, so this new government must take decisive action to achieve net zero emissions. It is disappointing that the Conservative party manifesto has put a feeble deadline of 2050 to achieve this.

“A much more robust response is imperative, including making good on their promises not to compromise the UK’s environmental, animal welfare and food standards in trade negotiations; so we look forward to seeing the legislation that unequivocally does that. It's also vital that this government, at all costs, avoids a no deal Brexit,” she adds.

Hird speaks on behalf of Sustain in expressing approval of the Conservative party’s most recent Queen’s Speech, which confirmed that the Agriculture Bill would take a “public money for public goods” approach, rewarding farmers for the work they do to enhance the environment and produce high quality food in a sustainable way.

“It was also a relief to see that their plans for the bill maintained its commitment to a Fair Dealing Obligation to strengthen transparency and fairness in the supply chain. We’ll be following the bill’s progress closely. We were also pleased that the government has confirmed their commitment to useful initiatives, such as the National Food Strategy,” Hird notes.

A general election will set the priorities for the next five years for this critical sector, according to Hird. “The Sustain alliance wants to see party manifestos across the political spectrum that improve the UK’s food system; relieve the NHS of costly health problems; boost economic prospects for thousands of British farmers, fishers, businesses and communities; and help UK food contribute to national goals of preventing child obesity, improving animal welfare, slashing climate emissions to net zero and restoring nature,” she concludes.

15 Sep 2020 --- China has banned pork imports from Germany after a case of African swine fever (ASF) was identified in a wild boar found near the German-Polish border.