You are in : All News > Weekly Roundup: Nick’s no added sugar ice cream debuts and NPD in plant-based sector prevails

In brief: Ice cream NPD
Swedish ice cream brand Nick’s is disrupting the ice cream category with the unveiling of its product that contains only a quarter of the calories compared to other known brands, without compromising on taste. Nick’s has reduced the proportion 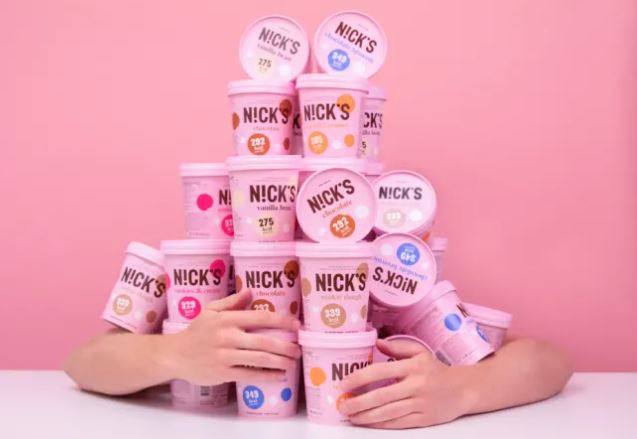 Click to EnlargeSwedish ice cream brand Nick’s is disrupting the ice cream category with the unveiling of its product that contains only a quarter of the calories compared to other known brands, without compromising on taste.  of fat as well as replaced refined sugar with plant-based sweeteners to further reduce calories. “It’s an exciting time for innovation in the food industry. Ice cream with a fraction of the calories is as good as regular ice cream. Today’s development in food science is consumer driven and consumers deserve food that is better for them, we can give it to them,” says the company. The ice cream is available in Vanilla Bean, Chocolate, Sea Salt Caramel, Chocolate Brownie, Cookie Dough and Cookies & Cream.

In brief: Plant-based developments
UK meat-free brand Quorn and Netmum have announced a partnership designed to help families in the UK reduce their carbon footprint. The Our Family Footprint campaign will be the biggest advocacy and project ever completed by Netmums in its 20 year history and marks a joint commitment by Netmums and Quorn to reduce the UK’s families carbon emissions by December. This follows the results of Netmums latest research, “Parenting 2020,” which revealed the environment is the number one concern and driver of purchasing decisions for the majority of families; 90 percent of parents said the environment is a key consideration in everyday life and 75 percent said they wish brands and retailers would make it easier to purchase sustainability and ethically.

The Meatless Farm Co has unveiled its latest innovations: meat-free breakfast sausage links and patties. Pioneers of texture and taste, the brand is currently the fastest growing alternative meat brand in the UK, and entered into the US market in 2019. The debut of these new meat-free breakfast sausages and meat-free sausage patties solidifies the company’s position as an innovator in plant-based proteins with the first-to-market fresh refrigerated breakfast options. Both sausage varieties are soy-free, gluten-free, a source of fiber, packed with protein and made from non-GMO ingredients. Starting this week, the meat free breakfast sausage varieties are available for both retailers and foodservice operators in the UK and the US.

In brief: Sustainability
Nestlé has joined the Child Learning and Education Facility (CLEF) coalition to boost quality education in rural communities in Côte d'Ivoire. The CLEF coalition is a pooled financing facility, and the first public-private partnership focused on scaling investments for quality education in Côte d'Ivoire. Members include the Ivorian government, UBS Optimus Foundation, ten other cocoa and chocolate companies and the Jacobs Foundation. Access to quality education is an essential tool to promote children’s rights and fighting child labor.

Click to EnlargeQuorn and Netmum have announced a partnership designed to help families in the UK reduce their carbon footprint. Over the past years, Nestlé has worked with the Jacobs Foundation to set up bridging classes and vocational training for young people through the Transforming Education in Cocoa Communities (TRECC) program. This partnership with the Nestlé Cocoa Plan helps children to (re-)integrate into the public-school system and support them to keep up with their peers.

DSM will reduce its CO2 emissions by approximately 85,000 tons/year through the signing of its largest renewable energy Power Purchase Agreements (PPAs) to date. These PPAs, one in Europe and one in the US, cover approximately one quarter of DSM’s current total annual electricity consumption. With these deals, DSM is well positioned to outpace its target of achieving 75 percent of purchased electricity from renewable sources by 2030. In 2019, DSM purchased 50 percent of its electricity from renewable resources. The PPA in Europe has been signed with EDPR, a global company in the renewable energy sector and one of the world’s largest wind energy producers. DSM will source renewable electricity from one wind farm and two solar power plants in Spain with a total capacity of 76 MW. The other large PPA in the USA has been signed with Origis Energy, a global solar company, for a solar plant with a total capacity of 78 MW. DSM is committed to sourcing 75 percent of its electricity from renewable resources by 2030 and reaching 100 percent at the earliest possibility.

General Mills has released its 2020 Global Responsibility Report, highlighting progress. The annual update, which marks 50 years of reporting for the company, outlines significant progress against and investments in four priority areas: Food, Planet, People and Community. . “At a time with so many unknowns, when food is bringing a sense of comfort and normalcy, it has never been more important to commit ourselves to growing our food with responsibility and care,” says Jeff Harmening, chairman and CEO, General Mills. In 2019, General Mills and its Foundation committed to advance regenerative farming on one million acres of farmland, enabled 5.5 billion meals through philanthropic partners and food donations, and invested in efforts that have collectively helped improve the lives of more than 22,000 smallholder farmers and their families.

Wageningen University & Research (WUR) has joined Foodshot Global, an international network of funding bodies, banks, businesses and knowledge institutions that provides credit to start-ups and other new businesses in the field of innovative food systems. Foodshot Global also organizes competitions whereby it hands out cash prizes to nominated individuals with a proven track record. Researchers and start-ups that operate under the flag of Wageningen University & Research can benefit much from the Foodshot Global network. It offers them an opportunity to obtain funding for innovative concepts or to establish a new company. In the coming year, for example, US$10 million has been made available for start-ups involved in innovative food systems.

In brief: Other highlights
US Mexican grill restaurant, Chipotle has been hit with a US$25 million fine for food safety violations. According to a US Attorney press release, the company will pay the damages to resolve criminal charges related to the company’s involvement in foodborne illness outbreaks that sickened more than 1,100 people between 2015 and 2018. “Although there was no intentional criminal behavior, this hefty food safety fine for negligence, should clearly send a message to the entire restaurant industry,” says William Marler, US Leading Food Safety Attorney and Advocate at Marler Clark. “The message is clear – food safety must be your paramount concern,” he highlights.

“Climate-conscious” pizza slices up sustainability scores on the label

08 Mar 2021 --- Germany-based food supplier Veganz is bringing its climate-conscious pizzas to the Australian market, which “lay all the facts on the table.”This debut... Read More

04 Mar 2021 --- Barry Callebaut’s Chocolate Academy North America team has launched Volume I of the Ruby Encyclopedia, a guide for chefs working with the fourth type of... Read More