You are in : All News > Weekly Roundup: Campbell completes sale of Kelsen Group, Non-alcoholic Baileys Cold Brew in cans unveiled 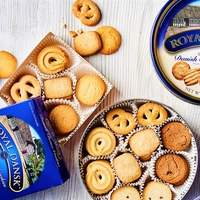 27 Sep 2019 --- This week in industry news, Campbell Soup Company completed the sale of Kelsen Group to a Ferrero-affiliated company for a purchase price of US$300 million, subject to customary adjustments. Kraft Heinz is partnering with Baileys, to launch non-alcoholic Baileys ready-to-drink (RTD) Cold Brew in cans, while Trader Joe’s expands its range with a new plant-based burger. Meanwhile, German yogurt brand Müller, has launched a new gin & tonic-inspired yogurt.

In brief: Business developments
Campbell has completed the sale of Kelsen Group to a Ferrero-affiliated company for a purchase price of US$300 million, subject to customary adjustments. Campbell will use the proceeds from the divestiture to reduce debt. Based in Nørre Snede, Denmark, Kelsen is a producer of quality baked snacks whose primary brands include Kjeldsens and Royal Dansk. Last month, Campbell announced a definitive agreement to sell Arnott’s and certain other Campbell’s International operations of Campbell’s International operations to KKR for approximately US$2.2 billion. Campbell continues to expect that transaction to close in the first half of fiscal 2020.

Cleaver's Organic, a grass-fed, free range beef brand in Australia, has expanded operations to include the US, offering meats humanely raised by family farms. As part of their mission to produce quality products while minimizing environmental impact, Cleaver’s has announced that it has achieved 100 percent carbon neutral status. 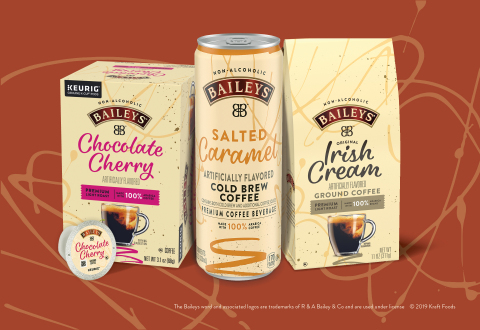 US grocery chain Trader Joe’s is expanding its range with a new plant-based burger in response to growing consumer interest. The company says its plant-derived patty that will look, smell and taste like real meat. “This is going after a meat-eating customer,” says Trader Joe’s Vice President of Merchandising Marcy Kopelman. “As a vegetarian, I can tell you that this is not going after me, because it really emulates meat. You want to see the interior is nice and pink.” Kopelman envisions a range of innovative plant-forward meat options, such as hot dogs, on the store’s horizon.

German yogurt brand Müller, has launched a new gin & tonic-inspired yogurt. Made with milk from British farms, Müllerlight Gin & Tonic yogurt is marketed as fat-free, high in protein and containing no added sugar. With the launch, the Official Yogurt of British Athletics is continuing with its strategy to add inspiration to its core range of branded yogurts, Müllerlight and Müller Corner, as it targets category growth.

Known for its innovative plant-based beverages in distinctive curvy bottles, Califia Farms has announced its 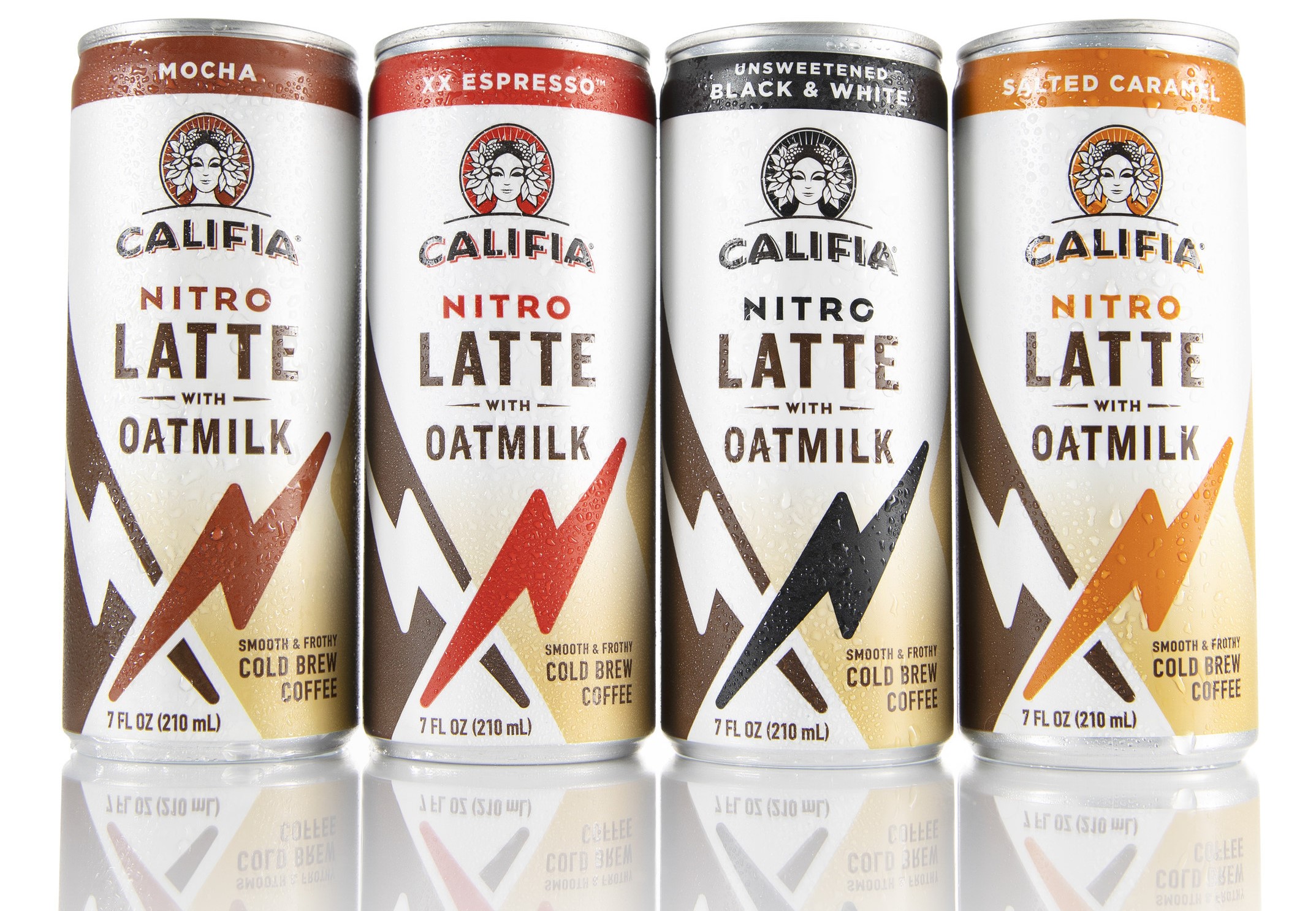 UK-headquartered global leavening agents manufacturer Kudos Blends is launching NEOS, its “zero-aluminium perfect match” for sodium aluminium phosphate. With its technology, NEOS produces a clean flavor and a tight, robust crumb that provides a soft eating texture, desirable in bakery applications. With sodium reduction in focus, Kudos Blends is additionally launching KODA Potassium Bicarbonate, created as a replacement for sodium bicarbonate (baking soda). The ingredient is touted as a “simple formulation change” that can deliver up to a 50 percent reduction in sodium while maintaining important quality characteristics.

Yasso Frozen Greek Yogurt announced the return of its limited edition seasonal flavors, starting with with the return of Pumpkin Cheesecake and the launch of the newest addition to the seasonal lineup: Pecan Pie – creamy brown butter frozen Greek yogurt filled with decadent cinnamon Graham Swirls and glazed pecans. 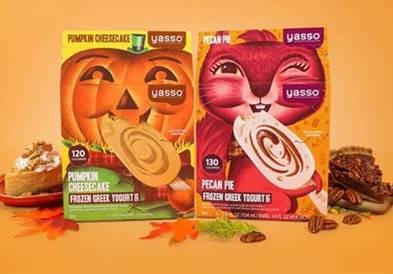 Click to EnlargeYasso Frozen Greek Yogurt in seasonal fall flavors.In brief: Miscellaneous
US citrus companies Peace River Citrus Products and Scott Family Companies and its partners will invest more than US$25 million to plant a quarter million new grapefruit trees on 1,500 acres in Florida, in a bid to boost grapefruit crop by 15 percent. The move is dubbed as the first major grapefruit planting in the state since citrus greening decimated Florida’s existing grapefruit groves. The rehabilitation of Florida’s citrus industry is backed by Coca-Cola, which invested US$2 billion, announced in 2013 to support the planting of 25,000 new acres of orange groves. Japan-based flavor house Takasago International Corporation has also invested US$1.5 million in the new tree plantings.

Global bioscience company Chr. Hansen has entered into an ambitious, long-term agreement with Better Energy, called the Power Purchase Agreement (PPA), to ensure that all of Chr. Hansen Denmark’s annual electricity usage is covered by renewable energy. The new 10-year agreement enables Chr. Hansen Denmark to switch 100 percent to green power from two brand new solar parks. Based on the agreement, Better Energy is responsible for the establishment of two new solar parks, which will be finished next April. Chr. Hansen’s energy supply will be secured with power production from a mix of several other renewable sources like wind and biogas.

Japan-headquartered ingredients manufacturer Taiyo has announced that its Sunfiber and SunCran ingredients are now certified by The Detox Project as glyphosate residue free. With this certification, Taiyo and its customers can use The Detox Project Glyphosate Residue Free Certified icon. Glyphosate, an ingredient in weed killers, is considered a probable human carcinogen according to the International Agency on Research for Cancer. Concerns about glyphosate residues, especially among corn or soy products, are a growing concern among the industry and consumers. Launched in May 2017, The Detox Project certification attests that a product has gone through analysis for levels of glyphosate, by third-party ISO-certified laboratories at least three times a year.

GNT Group is exhibiting at Moscow’s AgroProdMash exhibition this year, as the company continues to build awareness of EXBERRY Coloring Foods in the Russian market. Consumer demand is increasing in Russia for food and beverage products made without artificial ingredients. As a result, manufacturers are seeking alternative color solutions with clean-label appeal. EXBERRY Coloring Foods are derived from fruits, vegetables and edible plants, which aligns with this growing trend. “All over the world, more and more consumers are beginning to ask questions about how the food and drink they buy has been made. Now we are seeing this trend emerging strongly in the Russian market and it is expected to accelerate in the coming years,” says Jacek Meszka, Managing Director at GNT Polska.

28 Apr 2021 --- Chr. Hansen has launched its latest generation of FreshQ, a range of food cultures that improves the bioprotective effects of fermentation in dairy. The move will... Read More