You are in : All News > UK meat exporters call for urgent review of “failing” post-Brexit trade system amid border delays and losses 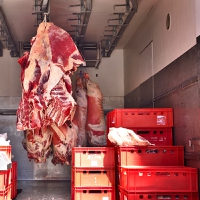 22 Jan 2021 --- As border delays halt exports from the UK into the EU, the British Meat Processors Association speaks with FoodIngredientsFirst about the “plethora of problems” they have been experiencing with the post-Brexit trade system. And, unless system modernization happens soon, there is a danger of sustained loss of trade.

This week there have been numerous reports of major losses for UK-based meat exporters. Many say that perishable meat products destined for the EU were delayed so much at the border and rotted consignments had to be thrown away.

Pegged as simple “teething problems” by some, the BMPA dismisses this insisting that while some issues are caused by the excessive bureaucratic system on both sides of the channel, there are other serious structural problems.

Others have branded the post-Brexit systems as simply “not fit for purpose”.

UK industry representatives have branded the post-Brexit systems as simply “not fit for purpose.”Alongside seafood, fresh meat is one of the most time critical perishable products. Pork, poultry and offal are particularly vulnerable because they all have a shorter shelf life and it is critical that not too much time is lost in transit, says Nick Allen, BMPA chief executive.

“Teething problems are people not understanding the system whether it be vets, the business, or officials, but no matter how good they get at doing this, the whole process puts 24 to 48 hours on the time a delivery can be made depending on if it gets a full inspection at the port. This does not work for a fresh food supply chain,” Allen tells FoodIngredientsFirst.

“We are calling for the current customs and certification system to be modernized and digitized, as the existing paper-based system is a relic from the last century and simply not fit for purpose. It was never designed to cope with the kind of integrated, just-in-time supply chain we have built up over the last 40 years, and if not fixed quickly it will be the thing that starts to dismantle the European trade British companies have fought so hard to win”.

How does the system work?
Allen explains the red-tape heavy and time-consuming system many BMPA members are struggling with.

“Currently the downloaded export health certificate (EHC) is fairly generic, the vet then has to check the product code that is being exported and from the guidelines physically cross out items that are not relevant to the product, and then stamp each change and initial the stamp.”

“These changes have to be made to all versions of the certificate which may have three translations of it. We have seen certificates with 70 stamps and alterations on them,” he says.

“It should be quite simple to have a system where the code is put in and the correct clean EHCs produced with no need for alterations. This is all very time consuming and prone to error.”

“One of our members recently reported that he had six lorry loads of product [value around £300,000] all waiting for customs clearance into the Republic of Ireland. At the time, one of those loads was about to be returned to the processing company after waiting five days for clearance. Drivers have been reporting long delays as they wait for HMRC to process the customs documents.”

Lower volumes
For the first two weeks of January most companies deliberately cut the trade they do with the EU and Northern Ireland down to a very low level so they could tentatively test out the new system, Allen explains.

But even at these low volumes, there have been significant delays for perishable products.Perishable UK meat products destined for the EU were delayed so much at the border and rotted consignments and had to be thrown away.

“So far we have only exported about 30 percent of normal volumes,” Allen continues. “This will now increase as people have to fulfill orders. They made sure that before December 31, customers had what they needed but now they have to start the volumes going again.”

Now, exporters need to return to normal and ramp up consignments. Meanwhile, other industries will be doing exactly the same thing, and further waves of chaos at the border are expected in the days and weeks ahead.

“If continental supermarkets are unable to have products delivered the way they need them to be, this trade will simply be lost as EU customers abandon UK suppliers and source product from European processors. Members are already being told by their EU customers that they’ll be looking to Spain and Ireland to buy products from now on,” Allen says.

The issue of groupage
When a lorry load of meat is delayed, it increases the chance of that order either being reduced in price, cancelled and returned or, in the most severe cases, thrown away and ending up in landfill.

An example of how the system is “failing British companies” is the issue of ‘groupage’ (small consignments of mixed products grouped into one big lorry load), explains Allen.

“Until now over 40 percent of the British meat industry’s trade with the EU was sent this way. It allowed processors to make smaller, daily deliveries of a wide range of high value, retail-packed goods to multiple EU customers to keep their shelves stocked with the variety of products their customers expect. Groupage is an essential part of this ‘just-in-time’ supply chain.”

“The new post-Brexit customs system for meat products is convoluted, archaic and badly implemented. At best it is causing delays to simple, single-product loads but at worst it has meant that grouped loads are now no longer viable to send. Indeed, some of the UK’s largest haulage firms have already ceased completely taking grouped loads,” he says.

Netherlands requires negative COVID-19 test
Further complications are also forecast as Dutch authorities brought in rules stating that all hauliers and van drivers travelling by ferry from the UK to Dutch ports need to have a negative lateral flow test within 24 hours of departure.

Coming the other way, from mainland Europe to England only, the rules are different with hauliers and anyone who started their journey in Ireland, Northern Ireland, Scotland, Wales, the Isle of Man, Jersey or Guernsey currently exempt from having to take a test, notes the BMPA.

British egg farmers are facing unprecedented rises in the cost of producing eggs – up to 30% on some farms – leaving many on the brink of bankruptcy with... Read More