You are in : All News > Transatlantic expansion: The Meatless Farm Co to rollout vegan patties and ground mince in the US

Transatlantic expansion: The Meatless Farm Co to rollout vegan patties and ground mince in the US 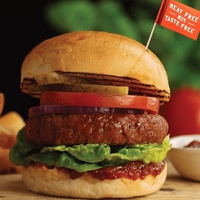 25 Jun 2019 --- UK plant-based firm, The Meatless Farm Co, will see its ground mince and burger patties stocked in Whole Foods Market stores across the US, effective this summer. The vegan producer’s transatlantic expansion coincides with significant growth in the meat alternatives market, which is expected to be worth £4.1 billion (US$5.3 billion) globally by 2020, according to the company. The US rollout follows launches of the brand’s products in the UK, Sweden, Canada and the United Arab Emirates (UAE).

“The US meat alternative market is currently the largest in the world and is strategically very important for the category,” says Rob Woodall, CEO of The Meatless Farm Co. “In the UK, we’ve seen our products start to become an essential part of consumers’ everyday shop and we are looking to replicate that success with American shoppers. Our ambition is to replace the main center of plate item and we know the only way we will achieve this is by delivering on taste and texture.”

According to Woodall, the market is “heating up” and it is a “game changer” for the company to partner with Whole Foods Market.

As a result of the US listing, the British-based company will be setting up an office in New York with General Manager for The Meatless Farm Co North America, Kasper Vesth, spearheading the US expansion.

“The response to our products in the UK, Europe and the UAE has been phenomenal, and with the meat alternative category in the US moving so quickly, it was a natural choice to expand into the nation,” says Kasper Vesth, General Manager for The Meatless Farm Co North America. “As plant-based alternatives become increasingly mainstream, we’re on a mission to make meat alternative meals delicious and offer everyday solutions suitable for flexitarians, meat-reducers, vegetarians and vegans in the US and the rest of the world.”

Meat alternatives are experiencing accelerated growth in NPD. Consumers are becoming increasingly aware of the adverse health effects of meat consumption, driving a boom in innovation in the alternatives and hybrid meats space. Innova Market Insights reports that meat substitutes accounted for 14 percent of global meat launches in the first nine months of 2018, up from six percent in 2013.

Alongside capitalizing on the recent boom in plant-based diets, Meatless Farm Co is also driving a wider environmental initiative. Earlier this year the company launched the UK Meatless consumption target, a campaign demonstrating that if every UK household ate one more plant-based meal per week for a year, 8.4 percent of the UK’s greenhouse gasses could be saved. This year has also seen continued innovation in new product development with the addition of plant-based sausages to its growing range.

Veggie-based protein tackles big butchers
Plant-based alternatives growth in the UK is rampant, with several brands launching meatless burger patties and sausages within the last year. According to food-tech firm Moving Mountains’ Founder, Simeon Van der Molen, London is one of the fastest growing capitals for plant-based dining and there is a huge demand for high-quality food offerings. The company launched the UK’s first “bleeding” meatless burger and has teamed up with not-for-profit vegan institution, Unity Diner, for the world exclusive launch of its new foot long meatless hot dog, which debuted in London last May. The London launch will be followed by other launches in several countries across Europe

This week, UK supermarket Sainsbury’s temporarily converted a London meatshop into a meat-free butchery to mark World Meat Free Week. Meat alternatives including mushroom, jackfruit, and pea protein are used to recreate over a dozen meaty cuts, joints, and strings of sausages, which are just some of the supermarket’s range of over a hundred plant-based products. This opening follows Sainsbury’s sales of plant-based products doubling last year and follows in the footsteps of meat giants on the supplier side tapping into the plant-based space.

Earlier this month, Hard Rock Cafe partnered with British food-tech company Moving Mountains to launch a plant-based hamburger – The Mighty 6oz Meatless Bleeding Burger – in Amsterdam, the Netherlands. The vegetable burger patty was innovated to sizzle, smell, taste and “bleed” like regular meat, offering a suitable option for flexitarians, vegans, vegetarians and meat eaters. The “bleeding” characteristic of the imitation meat is achieved through the use of beetroot juice. Other natural ingredients include succulent oyster mushrooms, peas, wheat and soy proteins, antioxidant-rich coconut oil, oats and the recommended daily allowance of vitamin B12.