You are in : All News > “Plant-based dairy is lagging behind meat”: Eclipse Foods debuts ice cream that feels and functions like conventional dairy 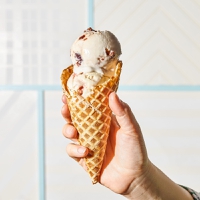 11 Nov 2019 --- Plant-based dairy brand Eclipse Foods is debuting in the US with an ice cream partnership with OddFellows in New York City and Humphry Slocombe in San Francisco. Eclipse says it “uses a blend of plants to replicate milk on a molecular level, creating a dairy replacement that tastes, feels and functions just like conventional dairy.” As consumers increasingly turn toward alternatives to traditional dairy, the company’s ice cream taps into a variety of trends, including clean label, vegan and free-from.

“We founded Eclipse Foods because we want to make it easy for consumers to make sustainable, healthy and humane choices. Plant-based foods that actually appeal to all types of eaters can and will change the world,” says Co-Founder Aylon Steinhart.

“While there are a growing number of replacement meat options with brands such as Beyond Meat and Impossible Foods, dairy has lagged behind. There are clearly alternative milks, cheeses, and ice creams out there made from nuts and other plants, but there are no true replacements that are indistinguishable from their dairy counterparts,” he adds.

Eclipse’s process of creating plant-based dairy involves common and sustainable ingredients like corn and cassava. With its first product, the company is using its milk to create a liquid ice cream base that spins in any type of ice cream machine and makes everything from soft serve to gelato. Flavors at OddFellows include Miso Cherry and Olive Oil Plum, while West Coast consumers at Humphry Slocombe will be able to purchase flavors such as Spiced Mexican Hot Chocolate.

“It’s been incredible to watch people try our ice cream for the first time and see the total disbelief on their faces when we tell them it is made of plants,” continues Steinhart.

Click to EnlargeConsumers are increasingly looking for short, identifiable ingredient lists as part of the clean label trend. Additionally, its animal-free nature is in line with Innova Market Insights’ newly announced number two trend for 2020 of “Plant-based revolution.” The market researcher highlights a 68 percent average annual growth in food and beverage launches with a “plant-based” claim (Global, CAGR 2014 to 2018).

Formidable investors
Eclipse Foods is backed by Reddit Co-Founder and Managing Partner at Initialized Capital Alexis Ohanian, Gmail creator Paul Buchheit, and Daiya Foods’ former Chairman of the Board Eric Patel. Steinhart hails from the Good Food Institute, a non-profit in the plant-based space, speaking regularly on food innovation at conferences and universities such as Harvard, MIT, Yale, Berkeley and Stanford. The other Co-Founder, Thomas Bowman, was a chef at Michelin-starred restaurants before becoming Director of Product Development at JUST, where he created and scaled plant-based products such as JUST Mayos, Cookies and Dressings.

Commenting on the investments in plant-based foods, Ohanian says, “Steinhart and Bowman were immediately impressive as accomplished experts in food science and the quality of the ice cream is already near indistinguishable from its dairy counterpart and it’s only going to get better. This is filling a need in the surging plant-based food space that is competitively priced, sustainably produced, and – most importantly – delicious.”

Earlier this year, US start-up Perfect Day launched its limited-edition vegan and lactose-free ice cream made with flora-based dairy protein. This marked the first time that the company – which specializes in the research, development and production of animal-free dairy – released a product for consumers to taste.

Moreover, other ice creams are diversifying to include a variety of health claims, from low-calorie and high-protein to other clean label varieties. Only 44 percent of US consumers consider flavor to be the main influencer when buying desserts and ice cream (Innova Market Insights consumer survey 2018), which suggests that they may be prioritizing other factors such as nutrition. There has been a 45 percent average annual growth in dessert and ice cream launches with a vegan claim (Global 2014-2018).

09 Jul 2020 --- Ingredion has completed its rice manufacturing expansion in Banglen, Thailand. The move is part of the company’s ongoing investments to grow its specialty... Read More