You are in : All News > Maximizing the waste stream: Durian seeds can be used to make stabilizers with probiotics, reveal Singapore scientists 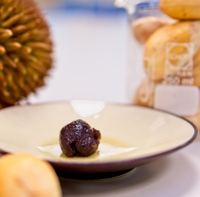 22 Jan 2019 --- Scientists from Nanyang Technological University, Singapore (NTU Singapore), have developed an all-natural food stabilizer from the seeds of the durian fruit. The durian, a thorny fruit known for its unique taste and smell, is popularly dubbed the King of Fruits in Southeast Asia. Its seeds (about 3-4 cm in diameter) are normally thrown away after the flesh is consumed, but using a patented technique to harvest the thick gum from the seeds, an NTU team has shown that it could be repurposed for use as a natural food stabilizer.

Food stabilizers are commonly used in prepared food items to give them a uniform texture and they contain sugar-protein biopolymers, which bind various ingredients that naturally tend to separate.

Some examples include gelatin and gum arabic which are often added in soft candy and sweeteners, pectin in dairy products, and emulsifiers in lotions and cosmetics. 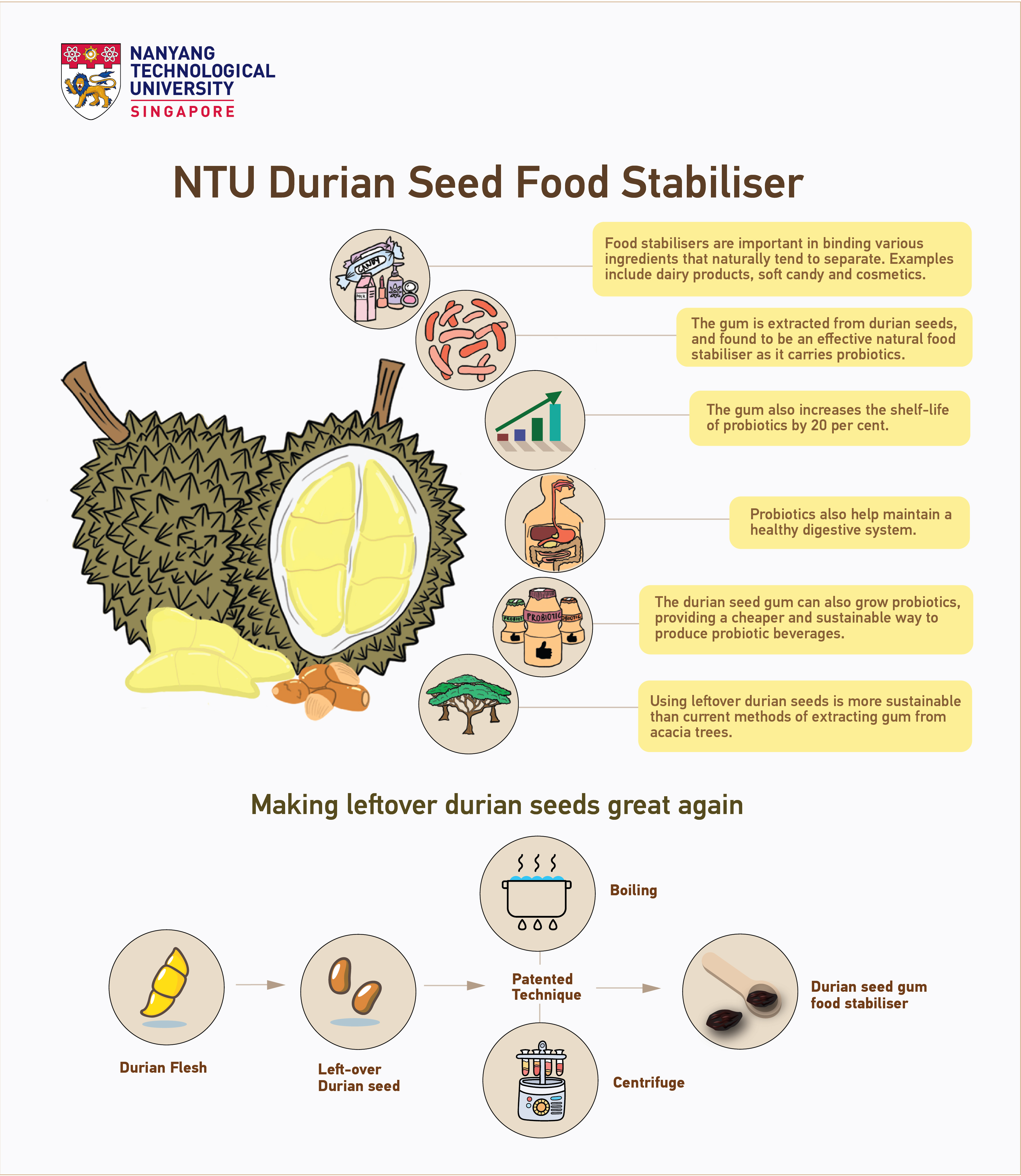 The durian gum harvested by the NTU researchers not only contains the necessary elements to serve as a food stabilizer, but also supports probiotics. These are good bacteria that help people maintain a healthy digestive system.

Professor William Chen, Director of NTU’s Food Science and Technology Program, confirmed to FoodIngredientsFirst that the durian seeds derived gum can be used in two main food applications:
1. To replace the currently used gum arabic as a food stabilizer/emulsifier.
2. As a nutrient support for probiotics, thus extending the shelf life of probiotics in beverages.

When compared with regular powder-based probiotics in commercial food stabilizers, the durian seed gum was found to be 20 percent more effective in prolonging probiotics’ lifespan, reported the team in the journal Frontiers in Sustainable Food Systems in September 2018.

In an environment of four degrees Celsius, the probiotic count using existing commercial stabilizers was significantly reduced after five weeks, compared to the two months for products containing the durian seed stabilizer.

The findings are the culmination of a three-year research project led by Prof. Chen, who is now in talks with several interested companies to license and commercialize the research findings. He would not disclose specific details about the plans.

Potential applications include probiotic beverages and as natural food stabilizers. As the food stabilizer from durians are plant-based, they are also suitable for vegetarians and those who avoid animal-based food stabilizers such as gelatin.

“The majority of consumer foods contain food stabilizers, which are indispensable to ensure that various ingredients that do not mix well can gel harmoniously. What we have done is to use something we often ignore when eating durians – its seeds – to produce a 100 percent natural food stabilizer that can even keep our gut system healthy,” said Prof. Chen. 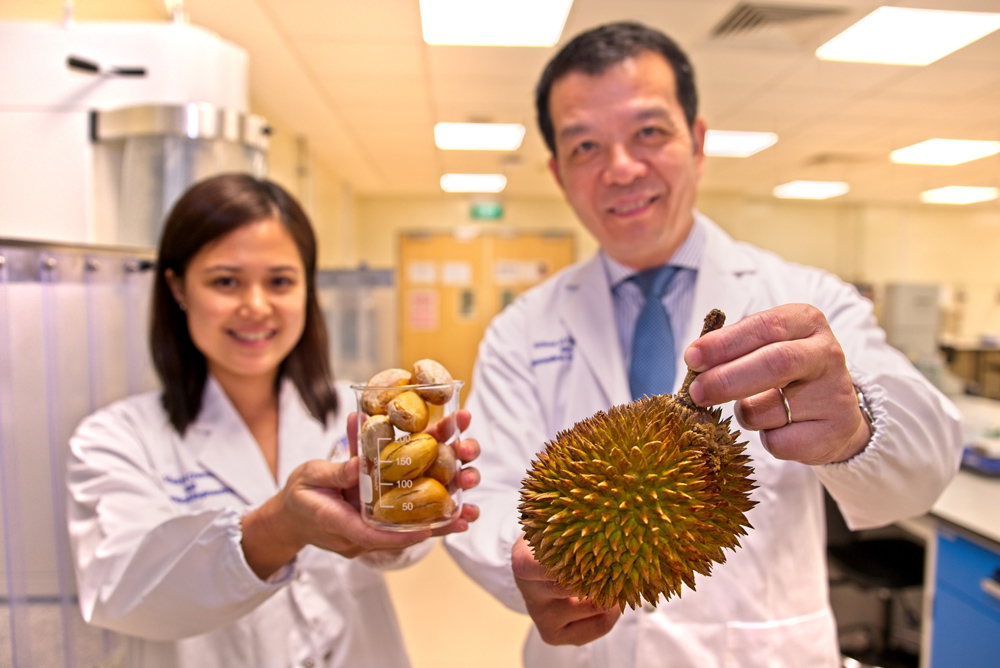 Making durian seeds great again: (L-R) NTU research fellow Dr Jaslyn Lee and Prof William Chen, Director for the Food Science & Technology Programme, turned the gum from durian seeds into a natural food stabilizer which can carry and support probiotics.Prof. Chen added that the gum can also be used directly as a cheap medium to grow probiotics bacteria, which reduces the production costs for probiotic beverages. “The total cost for conventional industrial processes to produce probiotic compounds is estimated at about SGD$60 (US$44) for every liter of the growth medium. In comparison, our discovery would only cost around SGD$13 (US$9.5) per liter to produce, which is 4.5 times more cost effective.”

Providing an independent view of the discovery made by the NTU research team, Ms. Shilpa Thakker, Senior Director for Research, Quality, Nutrition & Technology at Kellogg Asia Pacific Pte. Ltd., said, “Here we see innovation, sustainability and commercial ability delivering a novel ingredient that can be used across multiple (food and non-food) categories. This innovation gives an overview of leveraging current food trends in the use of food by-products to develop functional ingredients.”

“Future studies should now address the challenges associated with the sensory properties of the new products, including ingredients obtained from by-products, and consumers’ attitudes towards these sustainable novel food while meeting the functional properties it promises.”

Prof. Chen said that his research was largely driven by the challenges that climate change brought to future food production systems, and the need to overcome them sustainably through upcycling food by-products.

“At present, a majority of natural stabilizers are harvested from acacia trees’ gum, but with climate change rapidly affecting seasonal harvests, alternative and more sustainable sources need to be explored,” he notes.

“On average 6 million durians were consumed by Singaporeans in the first half of 2018 [Source: Asia One article, July, 20 2018]. If each durian contained around 300g of seeds, 3,600 tons of seeds were thrown away that year. By using durian seeds, we not only demonstrate that food by-products can be upcycled in a cost-effective way but also how it can be beneficial for industry and society,” says Prof. Chen.

Prof. Chen and his team had previously developed upcycling practices for other food by-products such as soybean waste and brewer’s spent grain, converting them into useful ingredients for consumption.

The news also comes several months after we reported that Prof. Chen and a team of fellow scientists have discovered a plant-based food preservative that is said to be more effective than artificial preservatives.