You are in : All News > Impossible Foods makes its international debut in Hong Kong 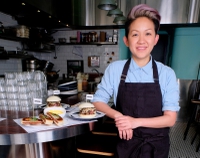 19 Apr 2018 --- The Impossible Foods is launching its award-winning plant-based meat in Hong Kong, at some of the city's most beloved restaurants: Little Bao, Happy Paradise, and Beef & Liberty. Ranked one of the world's top culinary hotspots by Conde Nast Traveler, Hong Kong is the first place outside of the US to feature the Impossible Burger, which cooks, smells and tastes like ground beef from cows, but is made entirely from plants.

Started in 2011 by Stanford biochemistry professor and former pediatrician Dr. Patrick O. Brown, Impossible Foods makes meat, fish and dairy directly from plants – with a much smaller environmental footprint than those from animals. The company uses modern science and technology to create wholesome food, restore natural ecosystems and sustainably feed a growing global population.
The Impossible Burger is served in more than 1,400 outlets in the US – from award-winning restaurants to mom-and-pop diners to the nation's original fast-food chain, White Castle. The vast majority of these restaurants serve the Impossible Burger on a bun with traditional condiments and sides. Starting today (April 19) in Hong Kong, diners will be able to try the product as a traditional burger – and as the central filling of savory street food.
Big taste, small footprint
In development since 2011, the Impossible Burger debuted in July 2016 at Chef David Chang's Momofuku Nishi in Manhattan. The Impossible Burger is the only plant-based burger to win a 2017 Tasty Award and a 2018 Fabi Award from the National Restaurant Association. 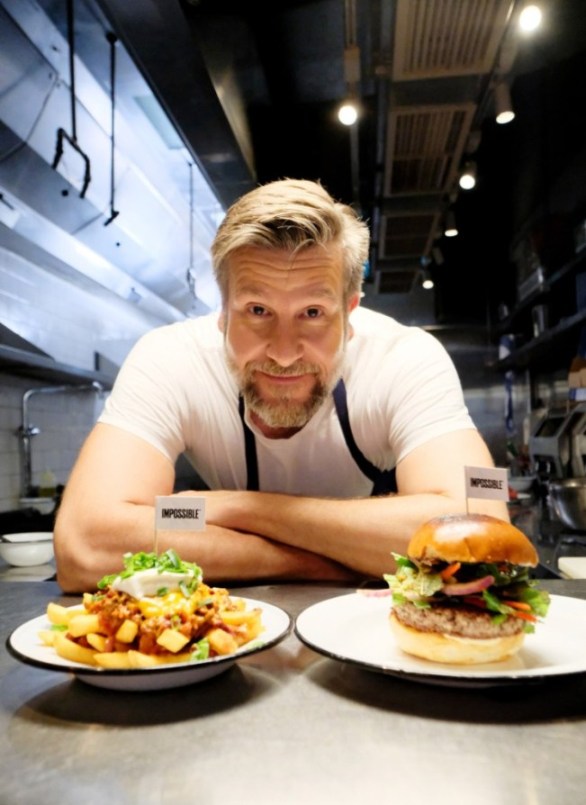 Chef Uwe Opocensky with both Impossible items
In addition to the American fast-food chain White Castle, The Impossible Burger is the only plant-based burger featured in America's most beloved “better burger” concepts Fatburger, Umami Burger, Hopdoddy, The Counter, Gott's and B Spot, the Midwest burger restaurant owned by Chef Michael Symon.
The Impossible Burger is made from simple ingredients, including water, wheat protein, potato protein and coconut oil. One special ingredient – heme – contributes to the characteristic taste of meat and is the essential catalyst for all the other flavors when meat is cooked. Heme is an essential molecular building block of life, one of nature's most ubiquitous molecules. Although it's found in all living things and in virtually all the food we eat, it's especially abundant in animal tissues. Impossible scientists discovered that it's the abundance of heme in animal tissues that makes meat taste like meat.
To satisfy the global demand for meat at a fraction of the environmental impact, Impossible Foods developed a far more sustainable, scalable and affordable way to make heme and therefore meat, without what it says is the catastrophic environmental impact of livestock. The company genetically engineers and ferments yeast to produce a heme protein naturally found in plants, called soy leghemoglobin. The heme in the Impossible Burger is identical to the essential heme humans have been consuming for hundreds of thousands of years in meat – and while it delivers all the craveable depth of beef, it uses far fewer resources.
The Impossible Burger is produced without slaughterhouses, hormones, antibiotics, cholesterol or artificial flavors. It uses about 75 percent less water, generates about 87 percent fewer greenhouse gases, and requires around 95 percent less land than conventional ground beef from cows.

This week in industry news, the Impossible Burger debuted at 145 Lidl grocery stores in the US. Also in the meat-free space, Beyond Meat’s Beyond Burger is set to... Read More

Impossible Foods plans to double the size of its R&D team over the next 12 months. This is in addition to expanding its multifaceted technology platform and... Read More