You are in : All News > FAO: World food prices edged up in April, sharp falls for sugar 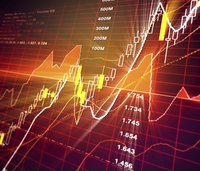 04 May 2018 --- The Food and Agricultural Organization of the United Nations reports that world food prices slightly increased in April but sugar prices fell further while the price of most cereals and dairy products edged up. 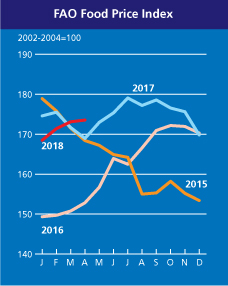 Click to EnlargeAnd while sugar prices fell, most cereals and dairy products continued to increase and vegetable oil and meat markets also remained under downward pressure.
Cereals
The FAO Cereal Price Index averaged 168.5 points in April, 1.7 percent (2.8 points) higher than in March and 15.4 percent above its value in April 2017. The Index has followed an upward trend for the fourth consecutive month, with prices of wheat, coarse grains and rice all gaining momentum in recent months.
In the case of wheat, weather-related risks, especially in the US and robust trade provided support to prices, while expectations of lower plantings in the US, on the backdrop of drought-reduced production in Argentina, continued to push up international maize prices.
Rice prices, on the other hand, increased, following a fresh round of public purchases by Indonesia and the launch of a state import tender by the Philippines.
The FAO Vegetable Oil Price Index averaged 154.6 points in April, entailing a 1.4 percent fall, month-on-month, which mainly reflects developments in the markets of palm, soy and sunflower oils.
International price quotations of palm oil (the oil carrying the highest weight in the index) declined on slowing demand growth and prospective seasonal production gains in Southeast Asia. Meanwhile, soy oil values weakened further, reflecting persistently strong crushing levels among key producers.
Conversely, sunflower oil prices firmed, fueled by expectations of tightening global export supplies.
Dairy
Click to EnlargeThe FAO Dairy Price Index averaged 204.1 points in April, up 6.7 points (3.4 percent) from March, representing the third successive month of increase. With this latest rise, the index is over 11 percent above its level in the corresponding month last year.
The upward price trend reflects robust import demand for all milk products, combined with market apprehensions regarding export availabilities in New Zealand following a bigger than anticipated decline in its milk output.
Meat
The FAO Meat Price Index averaged 169 points in April, down 1.6 points (0.9 percent) from a slightly revised value for March. At this level, the index is almost equal to its value in April 2017.
During the month, bovine and pig meat prices decreased slightly, while those of ovine and poultry meat remained stable. Larger exports from the Americas underpinned the decrease in bovine meat prices, while slackened import demand caused pig meat prices to ease.
Sugar
The FAO Sugar price index averaged nearly 176.6 points in April, down 8.9 points (4.8 percent) from March and as much as 24 percent lower than its April 2017 value.
Continued declines in sugar price quotations since last December are largely a reflection of a supply glut in the sugar market, especially given record outputs in Thailand and India, the world’s second-largest sugar producing country.
Additional downward pressure stemmed from a depreciation of the Brazilian currency (Real) concerning the US Dollar, coupled with anticipated government support measures in India and Pakistan geared at boosting sugar exports.

FrieslandCampina 2019 results: Higher profit and growth for branded products in a tough market

27 Feb 2020 --- FrieslandCampina has reported a slight decline in revenue, attributed to a 3.4 percent dip in milk supply, in a newly released 2019 financial overview. In the home... Read More

Premium confectionery and flavors on-trend in 2020

26 Feb 2020 --- Confectionery is building on premiumization in a market that is mature but continuing to grow modestly. Despite rising concerns around sugar intake, consumers... Read More

Cargill competes in plant-based space with launch of meatless range

25 Feb 2020 --- Cargill is set to roll out a range of alternative meat products, entering the market as the latest challenger to notable players such as Beyond Meat and Impossible... Read More