You are in : All News > Campbell Soup Sales Slip in Q2, Impacted by Fresh Foods 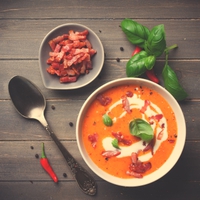 20 Feb 2017 ---- Campbell Soup has reported lower-than-expected quarterly sales, hurt by weak demand for its beverages, broth and condensed soups, sending its shares down by 8 percent. The fall was Campbell's biggest percentage loss in over eight years, after the soupmaker also said it did not expect sales to rise in its C-Fresh unit in fiscal 2017.

Denise Morrison, Campbell’s President and Chief Executive Officer, commented by saying: “I am not satisfied with our sales performance this quarter. Declines were most prominent in Campbell Fresh driven by a market share decline and weather-related issues in carrots, capacity constraints from the Bolthouse Farms Protein PLUS recall last June, and Garden Fresh Gourmet.”

She added: “Although V8 shelf-stable beverages declined, I am encouraged by the positive momentum in our core U.S. soup, simple meals and Pepperidge Farm snacks businesses. U.S. soup sales increased in the quarter, driven by our ready-to-serve varieties, such as Chunky and new Well Yes!, which performed above expectations.”

“C-Fresh performance was below our expectations. The new C-Fresh management team has conducted an extensive review of the business and has determined the recovery will take longer to execute than we originally planned. As a result, we no longer expect C-Fresh to grow this fiscal year.”

Sales decreased 1 percent to $4.373 billion driven by a 1 percent decline in organic sales, partly offset by the favorable impact of currency translation.

Campbell continues to expect sales to increase by 0 to 1 percent, adjusted EBIT to increase by 1 to 4 percent, and adjusted EPS to increase by 2 to 5 percent, or $3.00 to $3.09 per share. This guidance assumes the impact from currency translation will be nominal. A non-GAAP reconciliation is not provided for 2017 guidance since certain items are not estimable, such as pension and postretirement mark-to-market adjustments, and these items are not considered to be part of the company's ongoing business results.

Sales in the quarter were comparable to the prior year at $1.231 billion. Excluding the favorable impact of currency translation, segment sales decreased 1 percent driven by declines in V8 beverages, partly offset by gains in soup, Prego pasta sauces and Plum products. Sales of US soup increased 1 percent driven by gains in ready-to-serve soups, mostly offset by declines in broth and condensed soups.

Segment operating earnings decreased from $21 million to a loss of $3 million reflecting increased carrot costs due to the adverse impact on crop yields of heavy rains in December and January, as well as the cost impact of lower beverage operating efficiency and lower sales.

Morrison noted: “Despite the challenges, we remain confident in the growth potential of the packaged fresh category. C-Fresh continues to be an important strategic business for Campbell to meet growing consumer demand for fresh foods and interest in health and well-being.”

“We continued to over-deliver on our cost savings initiative, and now expect to achieve our target a year ahead of schedule. We have increased our savings target from $300 million by the end of fiscal 2018 to $450 million by the end of fiscal 2020. Looking ahead, we expect to improve our sales performance in the back half and are maintaining our guidance for the fiscal year,” she said.

In light of World Hunger Day, DSM has pledged to reach 800 million people with improved nutrition, including fortified staples such as rice, edible oil, flour and public... Read More