You are in : All News > Brexit: £705m funding package to help manage UK-EU border 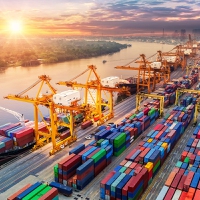 13 Jul 2020 --- The UK government is investing £705 million (US$889 million) for the GB-EU border to fund new infrastructure, jobs and technology. The investment is to ensure GB border systems are fully operational when the UK takes back control of its border after the end of the transition period (December 31), and to avoid the risk of bottlenecks in the food supply chain.

The new funding will include up to £470 million (US$593 million) to build the port and inland infrastructure needed to ensure compliance with new customs procedures and controls and take the UK’s border facilities to the next level.

It comes following months, if not years, of concern from the UK food and drink industry. This includes potential delays at UK ports because there is not enough space to handle the border control checks, including for food, which will come into effect once the transition period is over.

The government says it is taking “exceptional action” to build new border infrastructure inland where there is no space at ports. Where ports have space to build on-site they will get one-off financial support to ensure the right infrastructure is in place.

The government has been intensively engaging with industry in recent months to ensure that the processes introduced and the infrastructure developed is fit for purpose, and that industry is ready to manage changes and capitalize on opportunities at the end of the transition period.

A future trade relationship with the UK is vital for the EU, as the UK is the single largest trading partner of the EU with a total value of food and drink trade of €47.5 billion (US$51.5 billion) in 2018, according to reports by FoodDrinkEurope.

As the nation anticipates full departure from the bloc, experts point to “inevitable” bottlenecks to international supply chains and the need for F&B businesses to adapt rapidly to trade policy revisions.

The investment also includes £235 million (US$296 million) in staffing and IT systems. This includes:
- £10 million (US$12.6 million) to recruit around 500 more Border Force personnel and £20 million (US$25 million) for new equipment
- More than £100 million (US$126 million) to develop HM Revenue and Customs (HMRC) systems to reduce the burden on traders, alongside additional investment in technology to ensure that new controls can be fully implemented.
- £15 million (US$19 million) to build new data infrastructure to enhance border management and flow.

This package is on top of the £84 million (US$106 million) already provided in grants to ensure there is sufficient capacity in the customs intermediary sector to support traders.

“We are taking back control of our borders, and leaving the single market and the customs union at the end of this year bringing both changes and significant opportunities for which we all need to prepare. That is why we are announcing this major package of investment,” says Chancellor of the Duchy of Lancaster Michael Gove.

“With or without further agreement with the EU, this £705 million (US$889 million) will ensure that the necessary infrastructure, tech and border personnel are in place so that our traders and the border industry are able to manage the changes and seize the opportunities as we lay the foundations for the world’s most effective and secure border,” he adds.

Preparing UK for end of the transition period
On 1 January 2021, the transition period with the EU will end and the UK will leave the single market and customs union, regardless of the agreement the UK reaches with the EU on its future trade relationship. The government has been working closely with industry to help prepare for these changes and will shortly be publishing the Border Operating Model setting out in detail how the GB-EU border will operate.

This major funding package comes ahead of the launch of a new public information campaign to ensure the UK is ready to seize global opportunities at the end of the transition period. As part of this campaign, detailed guidance will be given to traders and hauliers explaining what they may need to do to prepare for the end of the transition period.

“The UK’s new start: let’s get going” sets out the actions businesses and individuals need to take to prepare for the end of the transition period and ensure they are ready to seize the opportunities that it will bring. Campaign advertisements will include the  “Check, Change, Go” strapline, which directs people and businesses to a straightforward checker tool online that quickly identifies the necessary next steps they need to take.

The campaign will run across the full range of communication channels, including TV advertising and radio, out of home, digital, print, and direct channels such as text messages and webinars. The campaign will also see the launch of a field force team that will give one-to-one support in person or over the phone to businesses and their supply chains to minimize disruption to the movement of goods.

27 Oct 2020 --- Eka Software Solution has unveiled a suite of solutions to digitize supply chains for commodity and raw material businesses. Manav Garg, CEO and founder of the... Read More

16 Oct 2020 --- European F&B associations threatened or hit by US tariffs as part of the Airbus trade dispute are jointly calling upon the EU and US to de-escalate this... Read More

UK Food and Drink Federation: H1 exports fall for the first time since 2015

02 Oct 2020 --- The UK Food and Drink Federation's (FDF) latest report shows that exports of food and drink in the first half of the year fell for the first time since 2015.... Read More

01 Oct 2020 --- UK beef exports to the US have finally been resumed after a 20-year ban was lifted reestablishing the US market to British producers. Following inspections... Read More